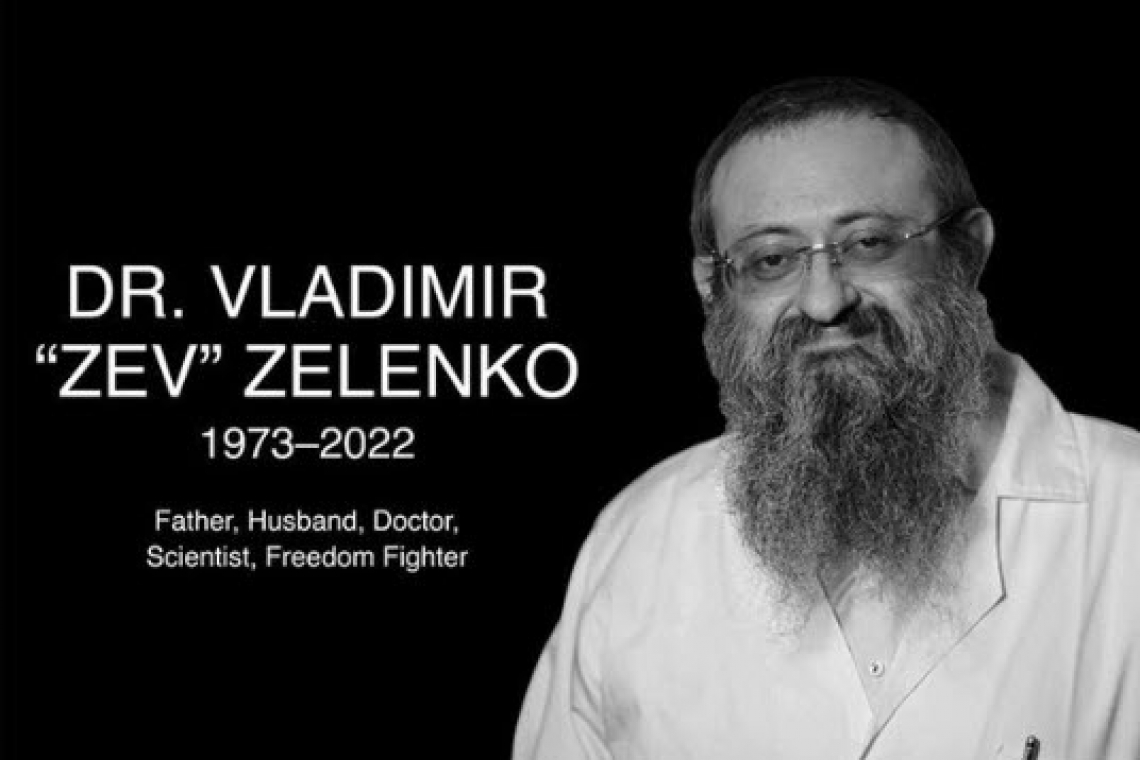 Doctor Vladimir Zelenko, a heroic man who stood-up in public to reveal the COVID-19 "pandemic" was nothing but hype, and who publicly declared the alleged COVID Vaccines to be a crime against humanity, died today from complications of cancer.

naturally did a hit piece on the man.

That's fast moving....there have been 75 edits to that article alone in the last 2 days:
https://en.wikipedia.org/w/index.php?title=Vladimir_Zelenko&action=history

There's a lot of bias in there, in my opinion as well.
We don't have to tolerate that....anyone can edit the content. Find the sources....correct the errors.

It's not all bad. Anything Covid related in the article is currently leaning left wing. The personal history part isn't half bad. I learned a few things. I had never looked into his personal story. He was younger than I though, an author of several books, and lived an interesting life:

"Vladimir Zelenko was born in Kyiv (then, part of Soviet Ukraine), in 1973.[1][4] His family moved to the U.S. when he was three years old, and settled in Sheepshead Bay neighborhood in Brooklyn, New York City.[4]....

Zelenko was twice married and had eight children.[29] He was a Haredi Orthodox Jew and a follower of the Chabad movement.

In 2019, Zelenko published an autobiography, Metamorphosis, that explores his journey from irreligious, Jewish Russian-American young man to a baal teshuva (newly religious Jew), and in turn created close ties with many diverse Jewish communities, and how circumstances in his life provided him with the willpower to overcome the challenges he has been handed, including a life-threatening disease.[30] Zelenko also lectured about his personal story and the book he wrote about it.[31][32] He also told of his personal journey in Mishpacha magazine.[29] Also in 2019, Zelenko co-authored with one of his sons Levi Yitzchok Zelenko, a book about Kabbalah, on Jewish mysticism, Hasidism, called Essence To Essence which “describes the metaphysical dynamics shared by science, medicine, psychology, economics, law, and politics.”[4][29]

Zelenko believed in the Hippocratic oath" First do no harm", unlike many of today's doctors who promote and dispense: pharmaceuticals and vaccines, and profit from it.

He should well be remembered for his Z protocol which has saved so many lives, maybe even one of a President.

His courage in facing tyrannical authority was outstanding. His early demise is truly a great loss to us all.

I wonder if his disease was deliberately induced in order to remove him and his influence, he would not be the fist to be so attacked.

Putin hastily passes a special bill calling for emergency powers for the Russian Armed Forces. The bill speaks of a general mobilization plan while putting the defense industry in a "state of war" asking them to work 24 hours a day without holidays and with triple shifts!

This is a bad development, not only for the course of the war in Ukraine. Mainly because the Russian leadership is preparing for the extension of the war outside Ukraine. The bill makes reference to "military operations abroad" specializing in Ukraine, but lays the groundwork for Kaliningrad and the Baltic.

The Russian leadership sees an organized NATO plan in both the Baltic and in the case of Norway and is preparing to respond militarily if the blockades in both Kaliningrad and Svalbard are not lifted.

Said - - lots of details are out about it, and - at the minimum, the vax does appear to be something that may make you sicker, than if you did NOT take it - - but

The Churches still seem to be sidelined on it.

https://www.bitchute.com/video/mlOrBCbGs6J7/
+9 # One of my heroes... — Radical for Freedom 2022-06-30 19:22
I've seen some authentic evil all around this "pandemic". From the highest positions to the lowest. Some horrible, horrible things.

I've seen some authentic angels, too. At least, the closest thing to it in this life. Some amazingly brave, intelligent and benevolent human beings have revealed themselves in this time.

Zelenko surely represented the beginnings of an angel.

I believe he saved millions of lives.

They care very little about what you believe as long as you believe that Covid-19 is real.

Germ theory has been thoroughly refuted. There is no virus. He and others perpetuated that lie. Nobody needs a big pharma cure for a disease that doesn't exist. That's what he provided.
+3 # You are an ignorant ass — Jessiebeaner 2022-06-30 22:56
Go die. If you think germ theory is bunk, I will provide you with some rabies germs from a family farm. Then, we can watch you die, smart ass fool.
-8 # "Cancer" — Haarnaś 2022-06-30 18:06
seems to hit a lot of healthy people nowadays. Another Covid vaccine critic Dr. Madej almost died in an airplane crash recently.

Stalin and others used to do it all the time in the old Soviet Union and now Putin continues in the new Rossiya while Mossad is at in the occupied Palestine-Holy Land: eliminate all the usual suspects!

Zelenko was a brave man to stand up to medical establishment ie Commie-Juice-run (since 1920s) Chicago AMA. Nominated for Nobel Prize. Spoke in person about Covid and Covid Vaccine to the incoming new PM of IsraHell, Satanyahu in 2020 and handed him a packet of info about the ill-effects of the vaccine to no avail. He then dared to talk about it public!!! Eliminated by Mossad on instructions from AMA.
-4 # RE: "Cancer" — Haarnaś 2022-06-30 19:39
Quoting Haarnaś:

Eliminated by Mossad on instructions from AMA.

Zelenko did not believe he was going to die soon. He was full of hope, even quoting his Bible (ie Talmud) to support his thinking that we will survive. Some of these cardiac tumors if not malignant can be surgically removed. Did you watch any Hollywood movies lately that show how easy it is to finish a patient hospitalized in ICU and eve under guard?
-4 # RE: "Cancer" — Haarnaś 2022-06-30 18:15
Quoting Haarnaś:

seems to hit a lot of healthy people nowadays.

Dr. Z also called this pandemic a genocide, which it is. Yes, he was a great man!
Refresh comments list
RSS feed for comments to this post
JComments
by sur.ly
100% Trusted Informational Platform Website 2021