East Coast Alert: 602 Earthquakes on La Palma - Could Cause TSUNAMI Wipe-out of Entire US East Coast 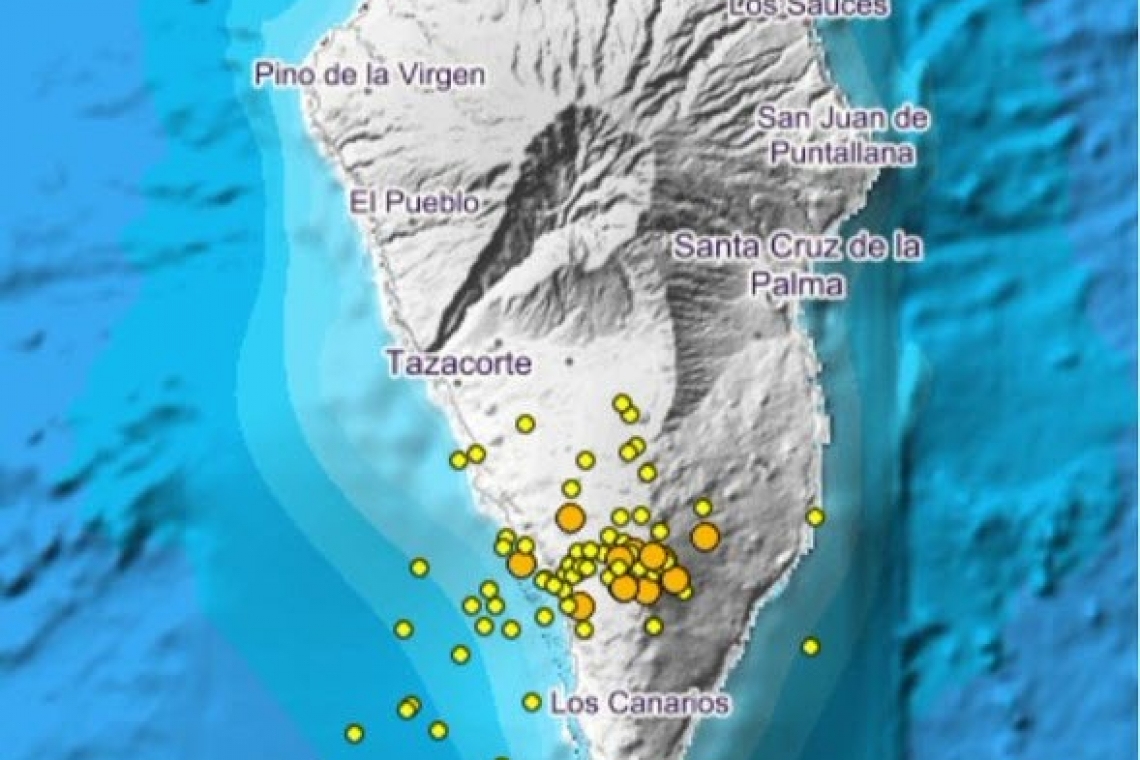 Just when you thought 2020 couldn't get any worse . . . the tiny volcanic Island of La Palma, a part of the Canary Islands off the west coast of Africa, has experienced 602 earthquakes in the past FOUR DAYS.

There is the very real possibility that a portion of the island will slide into the Atlantic, causing a "mega-tsunami."

The entire western ridge of the island is destabilized from countless volcanic eruptions and earthquakes over decades. The steep angle of elevation of the land makes it ripe for a landslide; into the Atlantic Ocean.

If that happens, about 500 Cubic KILOMETERS of rock and dirt will hit the ocean at about 200 MPH, causing an Atlantic Ocean Mega-Tsunami which will hit the US east coast six hours later.

The only warning that might take place of a potential landslide is a . . . . swarm of earthquakes.  Just like is taking place now!

The U.S. knows this is a very dangerous situation, so it placed Tsunami Warning Buoys in the Atlantic,  as seen on the map below.

But according to the National Data Buoy Center, two of those warning buoys, off New York City and Boston, MA, have been OFFLINE FOR MONTHS!

There will be NO WARNING.

In the video below, a Scientist outlines what will happen WHEN (not "if") the landslide takes place: A thousand foot tall wall of water around the initial island, part of which travels all the way to North America.  And when it makes landfall, the wave will be about one hundred feet tall!

Imagine what will happen to Boston, to New York City, To Washington, DC, and all the way down the coastline toward Miami -- total, complete, destruction.

Even if the Tsunami Warning Buoys were working - and some of them are not -- a Tsunami wave travels at about 500 Miles per hour through the ocean.   The warning buoys would only give the east coast about two hours advance warning.

How do you evacuate twenty million people from the New York City area in two hours?

The destruction and death would be on a Biblical scale.

Here is a computer model for the run-up water heights at various shorelines if only 500 km of La Palma slid into the Atlantic.  US east coast will see 90-100 foot tall waves coming ashore!

Folks along the US and Canadian east coast are strongly urged to closely monitor this situation.  If you hear that a landslide has taken place on La Palma, EVACUATE from the east coast immediately.   Don't wait.   The longer you wait, the more people will find out about it and begin trying to leave.  Within minutes, traffic jams, and car crashes by panicked people, will clog evacuation routes.

SPECIAL ATTENTION FLORIDA: Your entire state is only about five feet above sea level.   The wave would be about 75-100 feet tall when it hits the Florida east coast.   It is conceivable that your ENTIRE state would end up under water. Totally wiped out. There is likely no evacuation possible because of the size of the state and its entirety being low-lying.

The only chance might be to get on a boat and head out into the ocean and over the top of the wave before it hits land.

But that's a risky gamble because there's no telling how tall the wave might be as it travels across the ocean.

Worse, as the tsunami heads around the southern tip of FLorida, it will hit the Gulf of Mexico as well.  This would mean a wall of water ALSO coming into Florida from its west coast.  It is likely the state would no longer exist if such an event were to take place.

Others along the Gulf Coast should also be aware of this because the Tsunami, although smaller, would impact the gulf coast about 8 hours after a landslide.

I tell you this so you know the facts.   Don't panic. Plan!