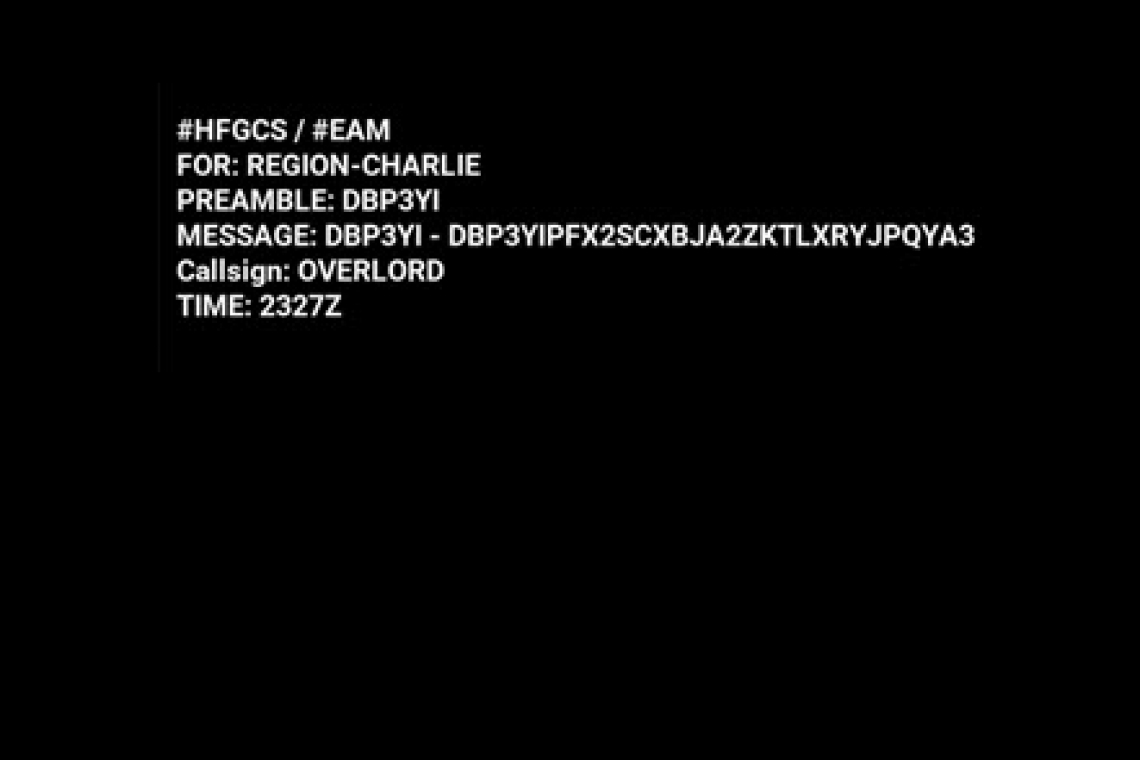 Here is one UK flight: 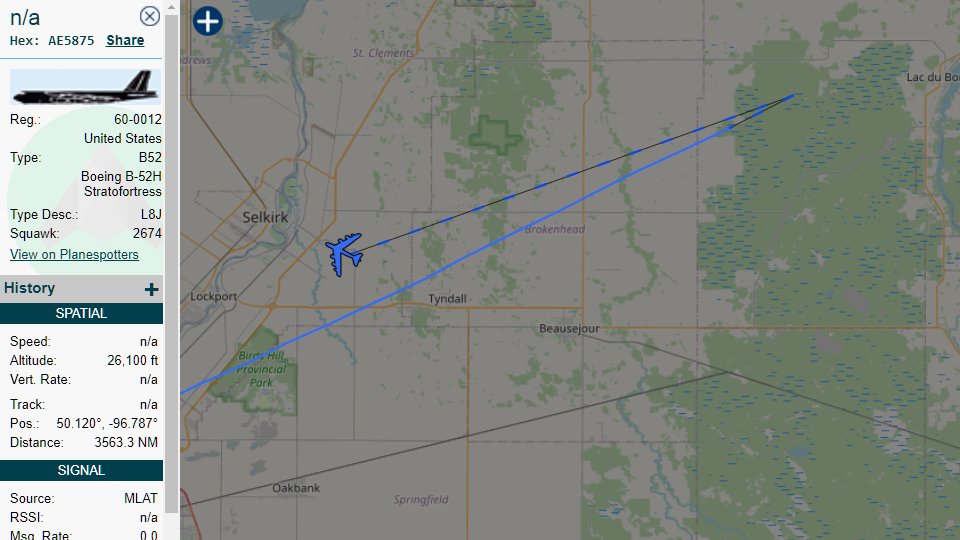 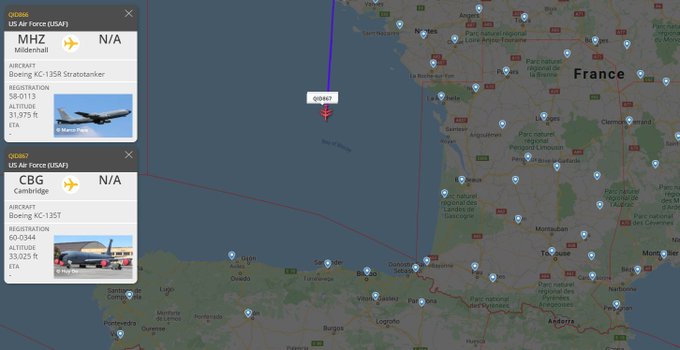 It and one additional B-52 are later shown moving toward air-refueling: 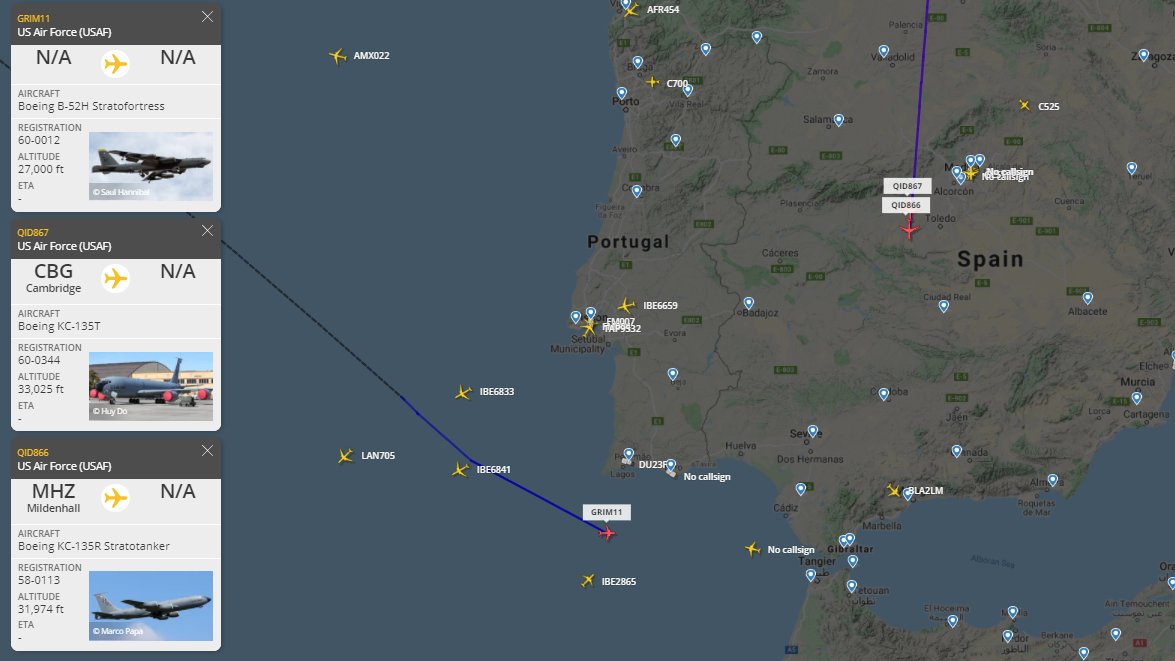 Later it can be seen transiting into the Mediterranean Sea:

Below, seems to be a flight of three more from the USA.

Refueling tanker aircraft also took flight from McGuire Air Force Base in New Jersey, presumably to meet-up with the B-52's from Minot Air Force Base and refuel them before they head out over the Atlantic toward the Middle East.  This one is a KC-10 79-0434 SPUR72 Heading north to provide AAR for the B-52’s on their way to the Persian Gulf. 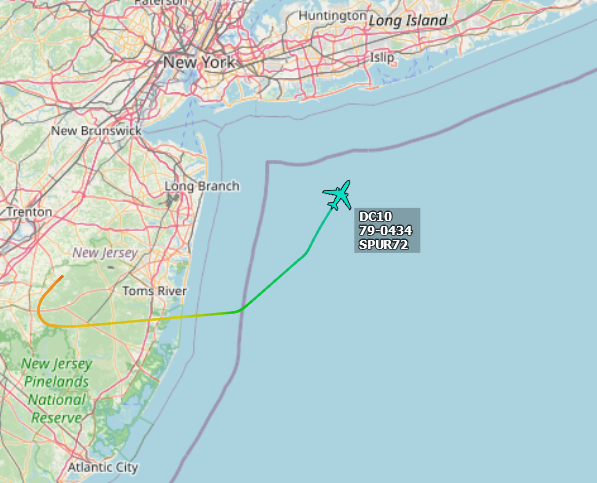 This Emergency Action Message is likely related to the intentional bombing, yesterday evening, of Oil Storage Tank facilities inside Syria, by the Russian and Syrian armies.

Those storage tank facilities were being used by the US, Turkey and Israel, to STEAL upwards of $100 Million per month of Syria oil.  Russia put the smuggling out of business last night with several ballistic missile launches that blew the storage tank farms to oblivion.  STORY HERE

In response, the US Navy has deployed a P-8 Poseidon sub-hunter aircraft to the area.  That plane is performing surveillance circles, tracking the submarine.

It is now appearing more and more likely the Americans are sending B-52's to strike back for the Ballistic Missile attacks upon oil storage tank farms in Syria, yesterday.  Those tank farms were hit and destroyed last night by Russian Ballistic Missiles, likely because the Americans, Turks, and Israelis have been using those storage tanks to STEAL upwards of $100 Million a month in Syrian oil.

With its clandestine money pit from oil smuggling now destroyed, the US "Deep State" is out for blood and it is now looking as though some type of massive strike upon Syria, and maybe even upon Russian bases inside Syria, is now in-play.

Why else would Russia put a Kilo Class attack sub to stalk the only US Aircraft Carrier strike group anywhere near Syria?

This situation is very fluid, and at this point, only the most high level people know what's truly being planned.   Whatever it is,  it has the very real potential to start a very major war, very fast.

The military has made a public statement about these aircraft:

A pair of B-52 bombers flew over the Mideast on Sunday, the latest such mission in the region aimed at warning Iran amid tensions between Washington and Tehran.

The U.S. military's Central Command said the two B-52s flew over the region accompanied by military aircraft from nations including Israel, Saudi Arabia and Qatar. It marked the fourth-such bomber deployment into the Mideast this year and the second under President Joe Biden.

Flight-tracking data showed the two B-52s flew out of Minot Air Base in North Dakota, something Central Command did not mention in its statement on the flights though authorities later published images of the flight crew preparing its departure there.

The military did not directly mention Iran in its statement, saying the flight was to “deter aggression and reassure partners and allies of the U.S. military’s commitment to security in the region.”

Inside sources tell me the message was for Russia, which, they say, "was not phased by what the US displayed."