The EURO currency is plunging in value against the U.S. Dollar all day Tuesday, as the world realizes what absolutely must happen as a result of Russia's announcement they will no longer sell vital commodities to "unfriendly nations."

The chart below shows the plunge of the EURO in trading today:

The reason this is happening has to do with a Decree signed by Russian President Vladimir Putin on Monday, July 4.   In that Decree, Russia declared it will no longer sell vital commodities to "unfriendly nations."

Since March, Russia decided that they would allow European countries to deposit EUROS into Russia's GAZPROM Bank, the bank would convert the money into Rubles (Russia's national currency) and those Rubles would be sent into Russia to pay for goods and services.

The reason Russia did that was because Europe SEIZED / CONFISCATED upwards of $285 BILLION in Russian Sovereign Wealth Funds that had been held on deposit in European Banks.   The money was grabbed by Europe as "Sanctions" against Russia for entering Ukraine militarily.

The Russians, unwilling to be robbed again, then established the trade policy outlined above, depositing EUROS in GAZPROM Bank branches IN EUROPE, having them converted into Rubles, and then sending the Rubles into Russia to pay.   Through this method, Europe was unable to seize any more Russian money.

In the ensuing months, the Europeans have literally doubled-down on Sanctions, grabbing the yachts of Russian wealthy oligarchs, cutting off transit of goods from Russia into its exclave state (oblast) of Kaliningrad.

So now, Russia has decreed that they will no longer sell vital commodities -- at all -- to unfriendly nations.

This means, among other things, no gas, no oil, no wheat, no barley, no chemical neon gas, etc.

Well, Europe NEEDS those things to exist.   Without Russian oil and gas, European industry won't be able to operate.  Plants will shut down.  Jobs will be abolished.  Products won't be manufactured.

Without gas, European power plants won't be able to generate enough electricity to keep businesses running.  There also won't be enough gas for common citizens in Europe to heat their homes this coming winter.

Without Russian Wheat and other agriculture, Europeans will go hungry.

This is the future of Europe: Cold, hungry, no jobs, no industry.

Europe thought they could literally break Russia's economy with Sanctions over Ukraine.  Instead, what actually happened was Russia's economy got through a tough hit and survived, but now Europe's economy is the one being actually destroyed; by their own Sanctions.

Because the money class sees that Europe cannot survive economically, or agriculturally, they realize the European Currency will likely collapse and be worthless.  So they're SELLING EUROS to get rid of them while they still have value.

The chart below show the gains by the U.S. Dollar against the EURO today: 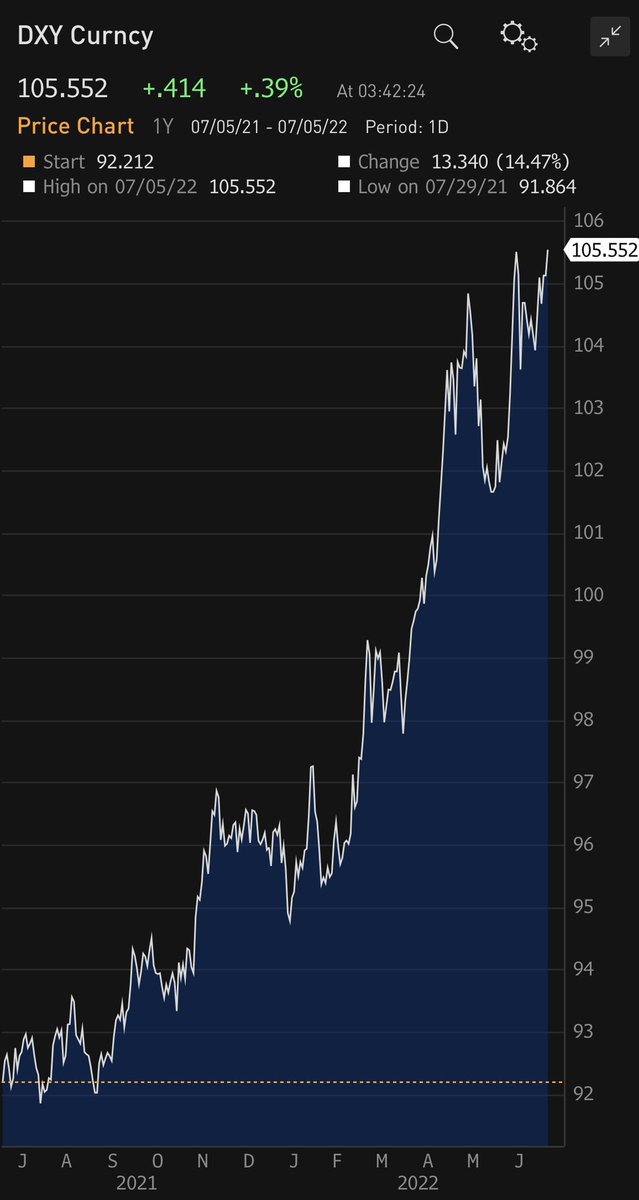 Thus, today's plunge in value of the EURO versus the U.S. Dollar.

Trouble is, as Europe goes . . .  so goes the United States about two or three weeks later.

Of course, the US has it's own oil and natural gas, so while it will be amazingly expensive, we'll still be able to get it.

And the US is a large producer of Agriculture, despite the fed Gov doing it's best to order farmers to plow-under their fields due to greenhouse gases, carbon emissions, and environmental concerns.  So while food will get stunningly expensive, there will still be food in America.

There may not be, in Europe.

The real impact upon the U.S. will come as European industry closes.  THAT is what will hit U.S. industry very hard, and whether it survives . . . is a real question.

As of today, what Europe absolutely, positively, without doubt and without fail, WILL SUFFER, can only be compared to the Great Depression and conditions during World War 2.

What the U.S. will end up suffering will be somewhere between the great depression and the 2008 financial crisis.   Closer, though, to the Great Depression.  Because without products and services from Europe, the US will see wide swaths of its industry, crippled.

Thank all those people who pushed "free trade" in the 1990's and early 2000's.  They are personally to blame for what's coming because they outsourced so much production to foreign entities, so they could personally pocket the money saved by reduced labor costs of foreign lands, while keeping prices for goods the same as they had previously been.

They sold out America to line their own pockets.  THAT is what the "free trade" crowd did.