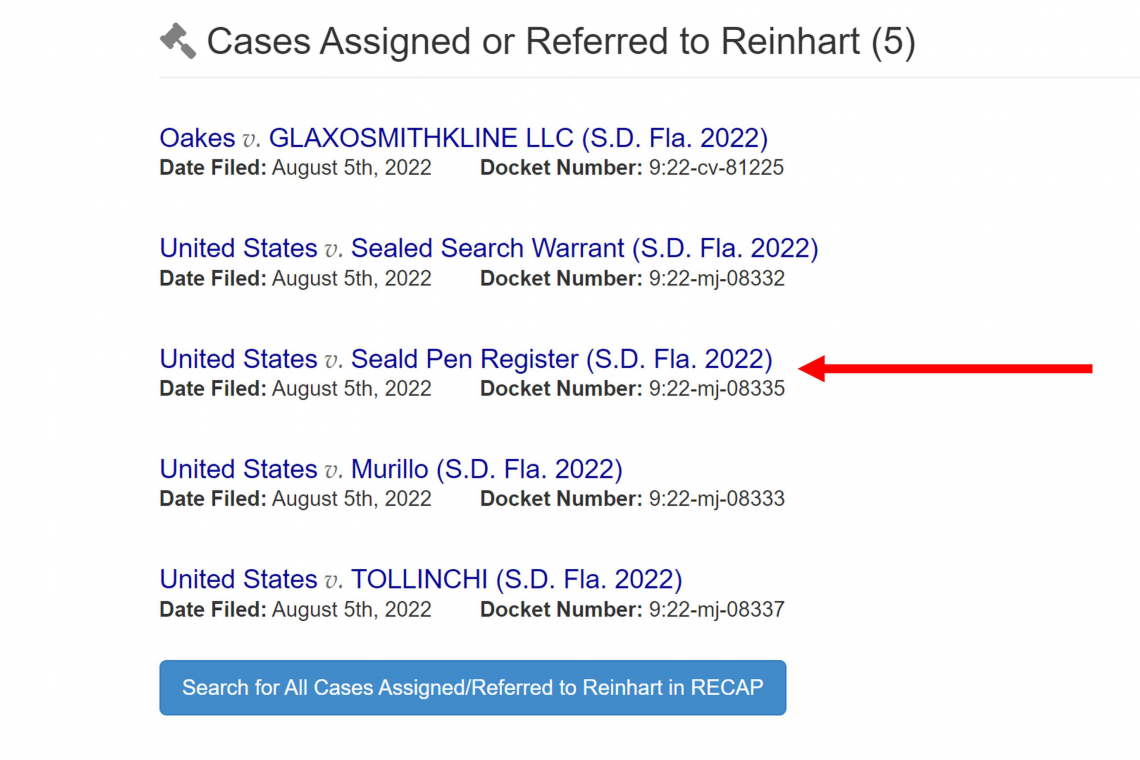 US Magistrate Judge Bruce Reinhart signed both Warrants on August 5 as shown above in a screen shot of the Court Docket Records.

Trump attorney Alina Habba appeared on Fox News with Jesse Watters. She said that they had been cooperating with the National Archives over the records and that this was completely “unconstitutional.” “Our country should be terrified—I am terrified,” Habba exclaimed. She said the FBI went in when he wasn’t even there, and then told his attorneys to leave, that they couldn’t watch or be there. “That doesn’t sound good to me,” she declared.  Here, watch:

Habba said the agents came in wearing backpacks, and she was concerned that they could have planted things since they were trying to get the attorneys out of there. Habba said she believed this was all part of the effort to try to take Trump down, and that people were “working in tandem” with other efforts.

Trump attorney Alina Habba: "There is more than people know that you'll be hearing ... If he wasn't ahead in the polls, this wouldn't be happening." pic.twitter.com/xYXRjjLa5o

Habba said the agents came in wearing backpacks, and she was concerned that they could have planted things since they were trying to get the attorneys out of there.

It turns out, she was right.

The Hal Turner Radio Show can now report that the backpacks being worn by Agents contained Pen Register software to spy on computers and electronic surveillance devices for both audio and video.

The Pen Registers are of a type that will not only monitor the computer they are installed upon, but will replicate itself onto every other computer on the same network.

It is not known at this time if that software will also spread to other networks for which the local computer may also have access.   For instance, if there is "Remote Desktop" set up so a computer in Trump's Palm Beach Home can connect to his corporate computers in New York City, there is the possibility that the Pen Register software can be programmed to infect that remote computer and its network too!

Some of the audio surveillance devices were installed into wall electric outlets, which provide the device with unlimited electric power, and allow it to use the ground wire from the home electrical system as an antenna so the audio can be received a good distance from the home being surveilled.

In addition, other devices were installed in lamps and ceiling light fixtures.  What appears to be a typical LED light bulb can now be altered to be a surveillance device because all LED light bulbs have small circuits inside.   So looking at the bulb or even x-raying it, will simply show a small set of circuits; without revealing they are actually eavesdropping circuits in addition to causing the light to work.

Many people are now openly expressing the thought that what has been done to President Trump is an example of an out of control US Justice Department and the FBI.  This type of activity has never been done to a former President in the entire history of the United States.