Folks Asked Me What I am Doing for Coronavirus Protection -- Lauricidin 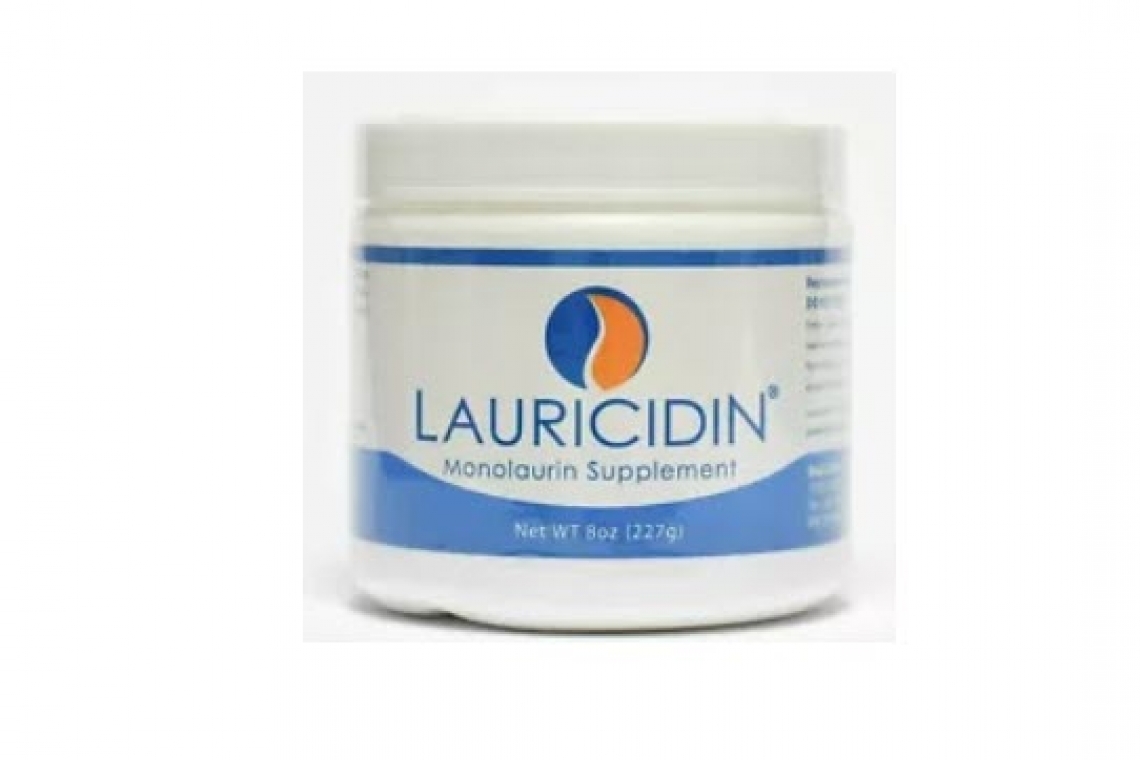 On my Wednesday radio show I mentioned that a number of you have been asking me what I am doing in an effort to prepare for Coronavirus.   I pointed out that the Virus has a Lipid Envelope, and that the over-the-counter food supplement Lauricidin seems to dissolve such virus envelopes, killing the virus.  Here's how to get yours:

Monolaurin in capsule form as a dietary supplement

Monolaurin has antibacterial, antiviral, and other antimicrobial effects in vitro, but its clinical usefulness has not been established. Monolaurin is currently sold as a dietary supplement and is categorized in the United States by the Food and Drug Administration as generally recognized as safe (GRAS).

Monolaurin is known to inactivate lipid-coated viruses by binding to the lipid-protein envelope of the virus, thereby preventing it from attaching and entering host cells, making infection and replication impossible.[12] Other studies show that Monolaurin disintegrates the protective viral envelope, killing the virus. Monolaurin has been studied to inactivate many pathogens including Herpes simplex virus[15] and Chlamydia trachomatis.[16]

Monolaurin also shows promising effects against bacteria (both gram-positive and gram-negative), yeast, fungi, and protozoa. Bacteria including E. Coli, yeast including Candida albicans, Helicobacter pylori (H. pylori), Giardia lamblia, Staphylococcus aureus (Staph), and other microbials have all been neutralized by monolaurin in scientific studies. Monolaurin also presented antibacterial and anti-biofilm properties against Borrelia burgdorferi and Borrelia garinii, the bacterium which cause Lyme Disease in humans.

Furthermore, monolaurin does not seem to contribute to drug resistance.

Now, I am NOT a medical Doctor and I cannot give medical advice.  I'm not.   I don't know if the studies mentioned in Wikipedia are correct or not.

I am simply telling you what Wikipedia says about this food supplement.  You have to decide for yourselves, what to do -- if anything.

Respiratory tract infections are conditions that affect the air passages. These include acute infections that affect the lower respiratory tract and lungs, such as pneumonia and influenza (1), which are among the leading causes of death in children worldwide (2). In 2015, 16% of all deaths in children under five years of age were attributed to pneumonia (2). These conditions may also have an impact on quality of life (3). Therefore, it is important to find interventions that could prevent respiratory conditions.

Vitamin D is a fat-soluble-vitamin, different from others in that a major source derives from UV light-induced conversion of its precursor under the skin. Dietary sources include fortified foods and supplements. Studies have indicated that there is a high prevalence of vitamin D deficiency worldwide (4–5). Vitamin D deficiency may affect the immune system as vitamin D plays an immunomodulation role (6), enhancing innate immunity by up-regulating the expression and secretion of antimicrobial peptides (7–8), which boosts mucosal defences. Furthermore, recent meta-analyses have reported a protective effect of vitamin D supplementation on respiratory tract infections (9–12). Therefore, in this commentary we reviewed the applicability of such intervention and implementation in settings with limited resources based on these four systematic reviews and meta-analyses.

This commentary provides an overview of four systematic reviews and meta-analyses (9–12). Yakoob et al. (9) conducted a Cochrane review of individually- or cluster-randomized controlled trials assessing synthetic oral vitamin D supplementation and the incidence rate of respiratory tract infection in children under five years of age. This review included trials of vitamin D supplementation at different doses and frequencies compared to a control group. The control group included placebo of propylene glycol or olive oil, or no intervention. The outcomes included in this review were incidence rate, duration, and severity of infections, particularly, pneumonia and diarrhoea. Pneumonia was confirmed by chest radiograph.

Bergman et al. (10) conducted a systematic review and meta-analysis of randomized controlled trials assessing vitamin D and incidence of respiratory tract infection, defined by each author as primary or secondary outcomes, including upper or lower infections in children and in adults; they excluded tuberculosis and fungal infections. The randomized trials compared vitamin D supplementation group to a control (no treatment or placebo) group. In this review, there were no limitations with regard to participant’s characteristics, vitamin D doses, and treatment duration.

Charan et al. (11) assessed the effect of vitamin D supplementation on the prevention of respiratory tract infections through a meta-analysis of randomized placebo controlled clinical trials in children and in adults. The outcome of this systematic review and meta-analysis was the episode of respiratory tract infection (pneumonia, influenza, common cold) in those randomized to the intervention compared to controls.

Martineau et al. (12) completed a systematic review and meta-analysis of randomized controlled trials with individual’s participant data. This review assessed the effect of vitamin D supplementation on acute respiratory tract infections in children and in adults.

Yakoob et al. (9) included four trials with a total of 3198 children from Afghanistan, Spain, and the USA. Pneumonia episodes (two trials reported this) were similar between those supplemented with vitamin D compared to controls (Rate Ratio [RR]: 1.06; 95% CI: 0.89, 1.26). The trial from Afghanistan found an increase in repeat episodes of pneumonia with vitamin D supplementation (RR 1.69; 95% CI: 1.28, 2.21) but not when confirmed or unconfirmed pneumonia was combined (RR 1.06; 95% CI: 1.00, 1.13). No study reported on duration of pneumonia or severity of infection.

Applicability of the results

Three of the reviews consistently showed a benefit of vitamin D supplementation for preventing respiratory tract infection mainly in children younger than 16 years (10–12). Two of the reviews also reported that the protective effect is observed only when single daily doses are used but not when bolus doses are given (10, 12). One review further showed that doses of 800 IU or less were protective of respiratory tract infections, but not higher doses (12). However, this protective role was not seen for pneumonia, as reported by Yakoob et al. (9) from only two trials.

It is important to note that most reviews reported significant heterogeneity, which may make the generalizability of the results difficult. This heterogeneity may be due to several reasons, including some publication bias, but also methodological issues, such as low numbers of trials, vitamin D supplementation regime used and heterogeneity of participants’ characteristics. With respect of vitamin D supplementation regime, these reviews showed that the size of the dose and the administration intervals might modify the effects of vitamin D supplementation on respiratory tract infections. Daily smaller doses were more effective than single large boluses of vitamin D. In fact, studies have shown that large boluses may in some cases increase the risk of adverse outcomes, such as increased risk of pneumonia, suppressed proliferative responses of peripheral blood monocytes, suppressed inflammation, and greater positive sputum cultures (13–16). With respect to participant’s characteristics, body mass index as well as baseline vitamin D status may modify the 25-hydroxyvitamin D response to vitamin D supplementation (15, 17, 18).

Implementation in settings with limited resources

Vitamin D supplementation for preventing respiratory tract infection is not routinely done. For this intervention to be effective, it should be done continuously, before the respiratory tract infection starts. This could be a major challenge in many under-resourced settings, as programme managers and policy-makers will have to plan for procurement of the preparation, storage, distribution, quality-control, and compliance assurance of vitamin D supplements for children on a routine basis. Failures in implementation of this intervention have been attributed in many instances to inadequate infrastructure and poor compliance, particularly in developing countries. Intermittent vitamin D supplementation would reduce some of these challenges, although results from these trials show that bolus doses are not effective. Future studies could evaluate the effectiveness of different dosing schemes on respiratory tract infections, such as once a week, which may be easier to implement.

Additional trials testing different dosing regimen (level of dose and intervals) are needed before implementing this at a population level. Also, trials should follow up participants long enough to understand if vitamin D is still effective once vitamin D status is optimal, as once vitamin D deficiency is corrected, giving more vitamin D supplementation may not provide additional benefits. Currently, there are other randomized controlled trials testing the effects of vitamin D on risk of acute respiratory tract infection, which could help elucidate some of these issues. In addition, future studies need to report adherence to the intervention to better understand if inclusion of non-adherent participants would bias the results reported so far.

The named authors alone are responsible for the views expressed in this document.

Conflict of interest statements were collected from all named authors and no conflicts were identified.

HERE IS A LINK TO SOURCES SELLING VITAMIN D