Foreign Press: Ukraine's Army Chief of Staff announced the start of the campaign in Donbass 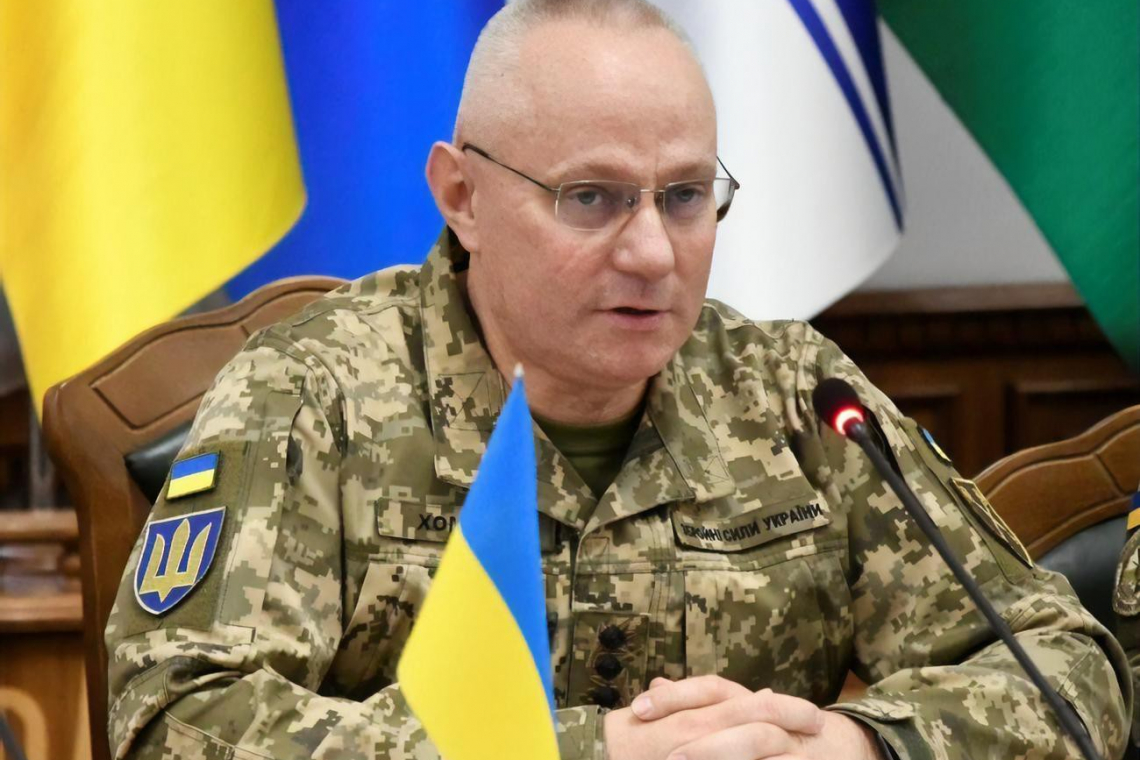 Sometimes there is an error in translation, and this MAY be one such case.

No European has anything to command or anything to want there. NATO is always commanded by a US general! Thus the threads go to the USA and not Europe.
In addition, Germany is an occupied country and do not even have a constitution. The Mrs. Merkel can tell what she wants, the orders come from the USA. Who in the USA that is, I do not know. Mr. Biden certainly not.

As far as I know, the Russians are fed up with the fact that the European military is always being pushed against them.
So Mr. Putin has also adjusted the defense doctrine: Everyone, including those in the background, will get their lesson this time.
Then maybe the Russians will have peace.
+3 # RE: Foreign Press: Ukraine's Army Chief of Staff announced the start of the campaign in Donbass — pko59 2021-03-31 17:19
I participated in a civil defense course in the mid-80s. There, the instructor explained how one should behave if a nuclear bomb were to hit around the next corner. We thought that was pretty idiotic, but let the gentleman prattle on.
After the lecture, of course, the instructor had some control questions for the audience, because he wanted to know if the material was understood.
My friend who was sitting next to me - by the way, a graduate in mechanical engineering, physics and mathematics - was called up and was supposed to answer the question what to do if an atomic bomb hits.

Soulfully, he said:
You have to watch it very attentive, because you won't see such a spectacle again!

I hope people understand...
+6 # RE: Foreign Press: Ukraine's Army Chief of Staff announced the start of the campaign in Donbass — CWD 2021-03-31 17:08
Russia isn’t playing and there about to smash the crap out of all in Ukraine

I keep asking myself what is the setup, what’s the angle NATO is playing knowing what they know, what false flag will they pull

Am sure they have it all planned
+1 # Screwed — Srmay72 2021-03-31 20:39
For years after every story we thought OH CRAP. Not knowing in a few years we would ever have been as screwed as we are now. We all need to reread the three boys cast into the fiery furnace. The fire was so hot the guards burnt up casting them into the fire.
This is the part we need to understand. When Jesus entered with them and 4 were seen they came out without smelling of smoke. We need to remember Jesus will protect his REMENANT as he did them. We need to do all we can , keep our oil in our lamps full
I live 30 min west of wright patterson airforce base so when i hear now from God I'm gone
I just listened that we will SACCRIFICE 40 million babies to satan, aka abortion, we can pray but WE ALL BETTER REMEMBER GOD HAS BEEN VERY PATIENT FOR YEARS WITH US. HERE WE SIT PRAYING FOR PROTECTION, BUT "WE DO NOT DESERVE ANYTHING. WE HAVE HAD HOW LONG SINCE ROE VS WADE? NOW IF THAT WAS NOT ENOUGH NOW EVERY OTHER COMMERCIAL IS GAY MEN IN IT.
SO WHEN YOU SEE OVER THE NEWS , IF THEY TELL US, THAT IN 30 MINUTES 20 TARGETED CITIES AND BASES WILL BE VAPORIZED. GOD WILL SHOW YOU IN A FLASH, THAT THIS IS WHY HIS JUDGMENT IS COMING. THINK ABOUT THAT........ I HAVE FOR MONTHES. USE ABORTED BABIE PARTS FOR A VACCINE WE SEE MILLIONS OF ," CHRISTIANS", STAND IN LINE THEN BRAGGING ABOUT GETTING IT.
I SEEN AN ARTICAL WITH FRANKLIN GRAHAM EATING PENIS SHAPED DOUGHNUTS IN FRONT OF VODOO DOUGHNUTS. THEN READ ON HOW RICHARD NIXON AND "BILLY GRAHAM " BRUETILY RAPING A YOUNG GIRL THAT CAME OUT TO TELL WHAT WE KNOW THEY ALL DO. MY FAITH IN HUMANITY WENT FROM .0000000009% TO NONE. IF YOU DO NOT HAVE JESUS IN YOUR LIFE YOU BETTER GITTERDONE
# Flag at home? — Gregg W 2021-03-31 19:10
Maybe the rats will set something off in the states and blame “Russia Russia Russia”. That’s their favorite boogeyman lately. If it’s bad enough they’ll rile up a bunch of patriots (?) to go to war. Just an option. Who knows? Maybe Vladimir has had enough and won’t play around anymore?
+4 # Perceptions Differ Greatly — Doug Brown 2021-03-31 16:56
The American military see's
Itself as the good guys.
The rest of the world doesn't see
us that way.
The world sees a snake when it sees
Biden. People hate snakes.
People see American men as
twisted and effeminate, men who
sniff other men's buttholes and are
rewarded for it with high positions
In Joe's Administration.
Duduman said it.
The world despises Biden.
# Troop Movements — TheProphet 2021-03-31 16:17
The 2nd Armored Cav is moving from Germany to Poland to counter Russian troop movements:
https://americanmilitarynews.com/2021/03/us-military-raises-europe-threat-level-to-potential-imminent-crisis-report/?utm_source=quayle&utm_campaign=alt&utm_medium=facebook
+6 # RE: Foreign Press: Ukraine's Army Chief of Staff announced the start of the campaign in Donbass — TexasWolf 2021-03-31 15:58
If attacked, expect Russia to go to Kiev.
+5 # WW3 — Bruce058 2021-03-31 15:42
Get ready for 1/4 of the people on this planet to die by war, famine and pestilence. That is 1.9 billion. Book if Revelation. Pray for the kids.
# What if — Srmay72 2021-03-31 20:44
What if those lucky enough to have died up to now was the rapture? Lord I pray not but those dead now are the blessed ones. Remember God put you at this exact time in history because you have a mission from God.
+1 # Revelation — Gregg W 2021-03-31 19:12
It was spoken by God so it WILL happen. That much is certain. I agree pray for the little ones.
+8 # TONIGHT'S SHOW — dblaker 2021-03-31 15:40
Hal,
Please devote your entire show tonight to discuss the events in Ukraine. Hell with the scamdemic and virus. Ukraine is much more important. This has the potential to spiral into a nuclear war especially if U.S. European Command and NATO become involved in it.
I think the following movies should be aired worldwide for everyone to watch:
THE DAY AFTER
THREADS
BY DAWNS EARLY LIGHT
TESTAMENT
I think the world needs reminding of just how horrific this could turn out to be.
+3 # Agree — CWD 2021-03-31 17:05
Agree
+12 # Agree — beth_mccanna@hotmail.com 2021-03-31 15:59
Yes Hal, please give us all the news you have. I wish you would not let people call in. Most of them are just a colossal waste of time. Sometimes I think I may not live through having to listen to these morons. You are a far more patient person than I am. Lol.
+11 # thank you — josey wales 2021-03-31 16:11
Beth,
I agree, I usually stop listening to the show after Hal's dialogue as most of the phone call-ins are a waste of time.
+3 # Liberal news outlets — TheProphet 2021-03-31 15:38
The liberal media is toeing the Biden/MIC line and blaming Russia for the fighting breaking out in Ukraine. But yet, Ukrainian Generals state they started the fighting. It's all about the money and the resources (which sell for gold and silver).

Follow the money and it leads to the Easter Mediterranean, a small nation...
+1 # May have started already — brawert 2021-03-31 15:22
https://americanmilitarynews.com/2021/03/us-military-raises-europe-threat-level-to-potential-imminent-crisis-report/

This says that there were 4 dead Ukrainian soldiers in skirmishes already
# "some chatter about some skirmishes in the area, with some shots fired." — Palehorse 2021-03-31 15:20
|

since NATO is not a sovereign government... where does NATO get off bringing in "their supplies?""

At this point in the larger picture, "I don't think they care."

According to the New York Times, Gen. Tod D. Wolters, the head of U.S. European Command declared a “potential imminent crisis,” which is the highest potential watch level.

The command raised the watch level after four Ukrainian troops were killed in recent fighting in the Donetsk region.

https://americanmilitarynews.com/2021/03/us-military-raises-europe-threat-level-to-potential-imminent-crisis-report/?utm_source=quayle&utm_campaign=alt&utm_medium=facebook
# Doesn’t matter. Yes — Gregg W 2021-03-31 19:17
Maybe we have promised a spot in NATO if Ukraine doesn’t screw this up? I’ll bet that comes with lots of cash and promises. Of course we are probably holding a gun to their head. “I’m gonna make you an offer you can’t refuse.”
+8 # live show...or not — Burnit 2021-03-31 15:04
If things go bad, there might not be a live show, other than a light show!
+1 # @Burnit — pko59 2021-03-31 17:04
Yes, a light show, and a damn fast and strong one at that! Moreover, it could linger for a long time
Refresh comments list
RSS feed for comments to this post
JComments
by sur.ly
100% Trusted Informational Platform Website 2021