France Gov't Printed "VACCINE PASSPORT" Signs 4 days BEFORE France Ever Had a Case of COVID-19; This Whole COVID Situation has been PLANNED for years 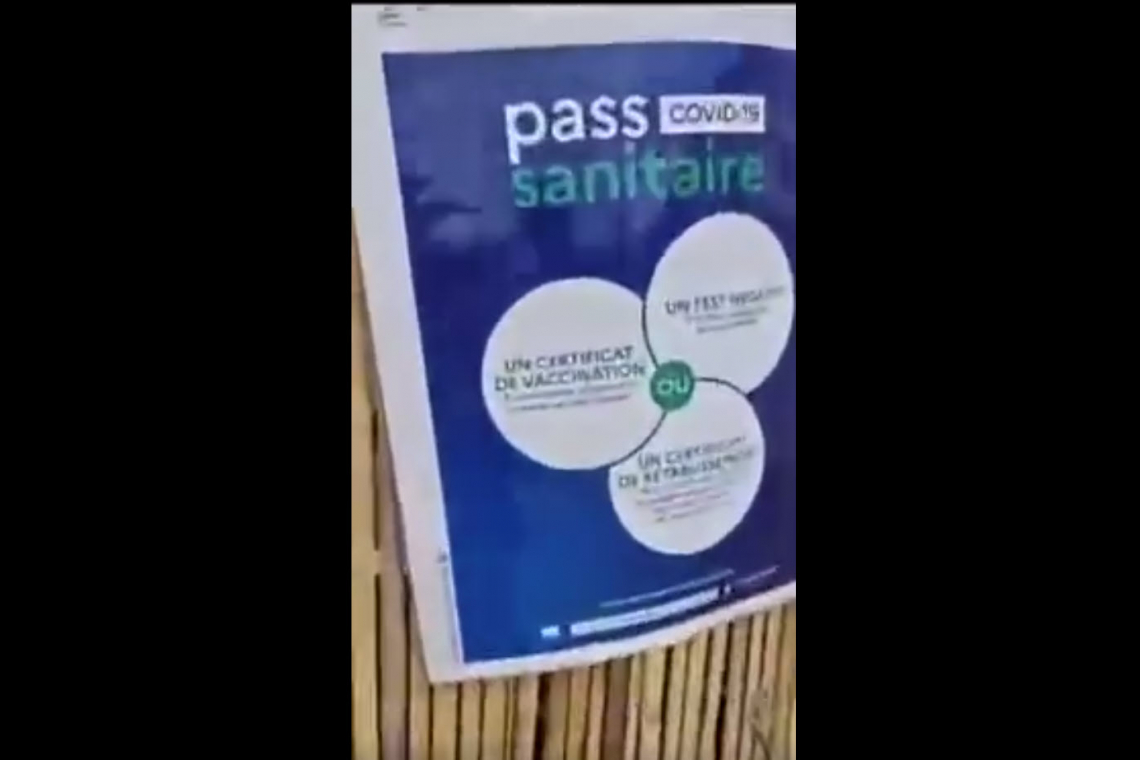 Evidence has surfaced PROVING the French government had public signs for required VACCINE PASSPORTS printed-up FOUR DAYS BEFORE FRANCE HAD A CASE OF COVID.  The signs were printed on 20 January 2020 yet France didn't have its first case until four days later, on 24 January 2020.

The evidence that this whole "COVID-19" situation worldwide is not only a farce, but a PLANNED attack upon humanity, has arisen in France.

The video below, taken in France, shows the public signage now being put up in France (Sunday, August 8, 2021) telling the public they are REQUIRED to have a vaccine certification.  Those signs show the printing production date of "20 January 2020" a full four days before France ever had a case of COVID in the country!

Here is the video:

Here is the still-image of the COVID Sanitary Pass Sign: 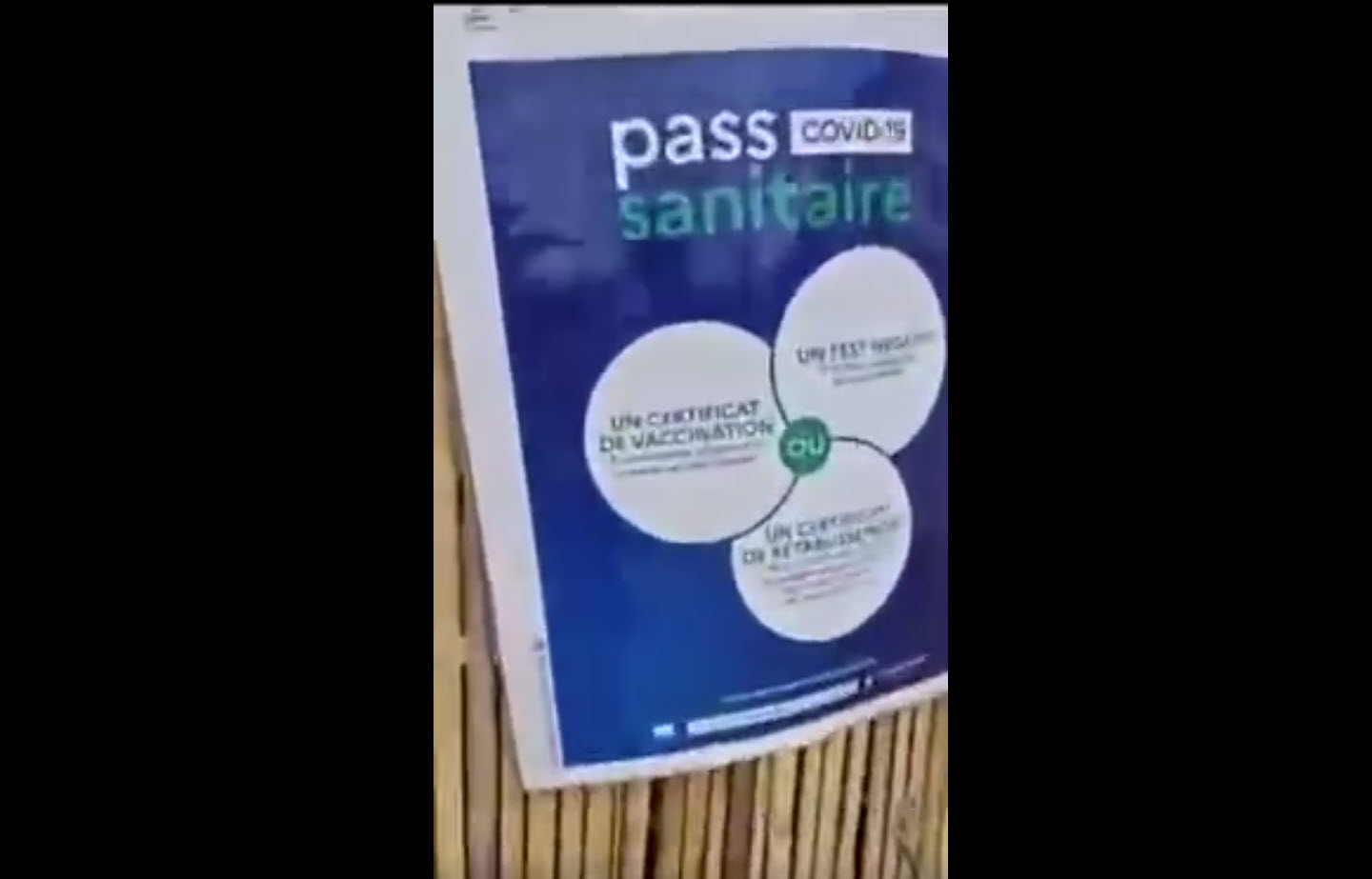 And here is the zoomed-in section clearly showing the date 20 January 2020: 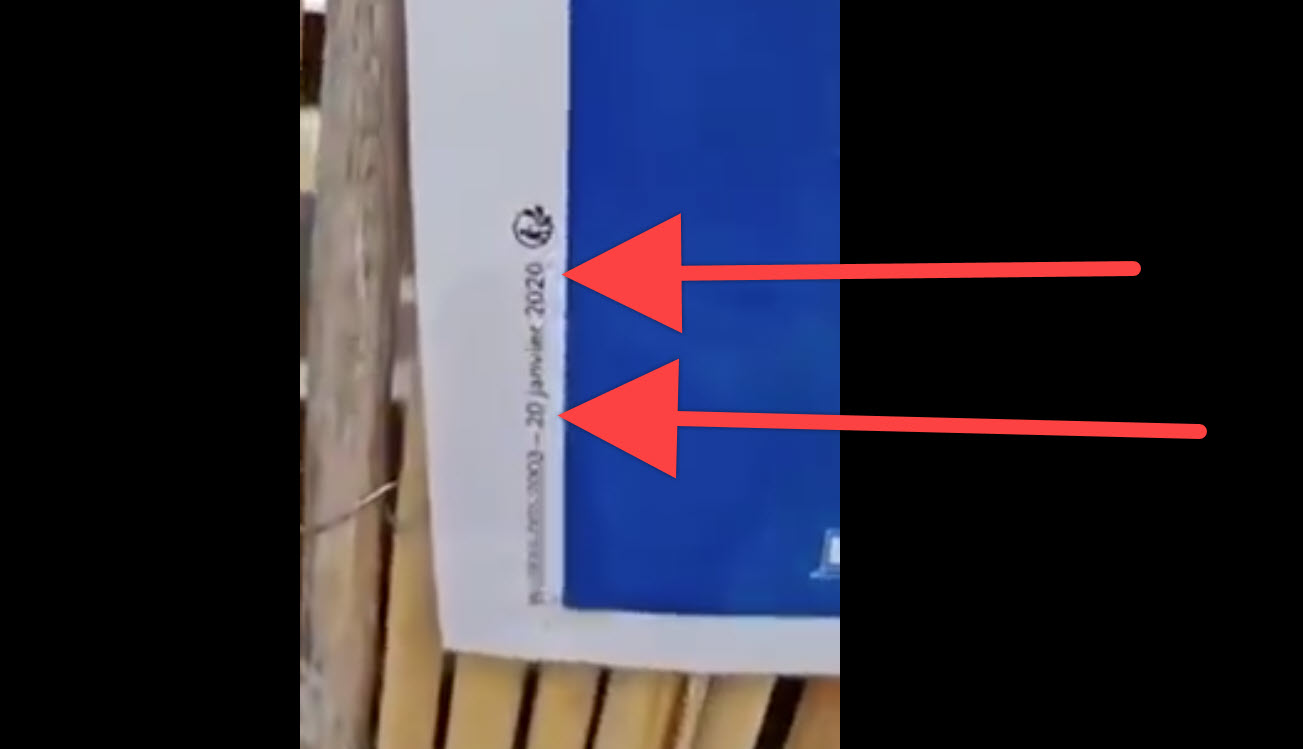 For the record, the month of January is spelled Janvier in French, exactly what you see in the image above, and as verified by Google Translate, shown below: 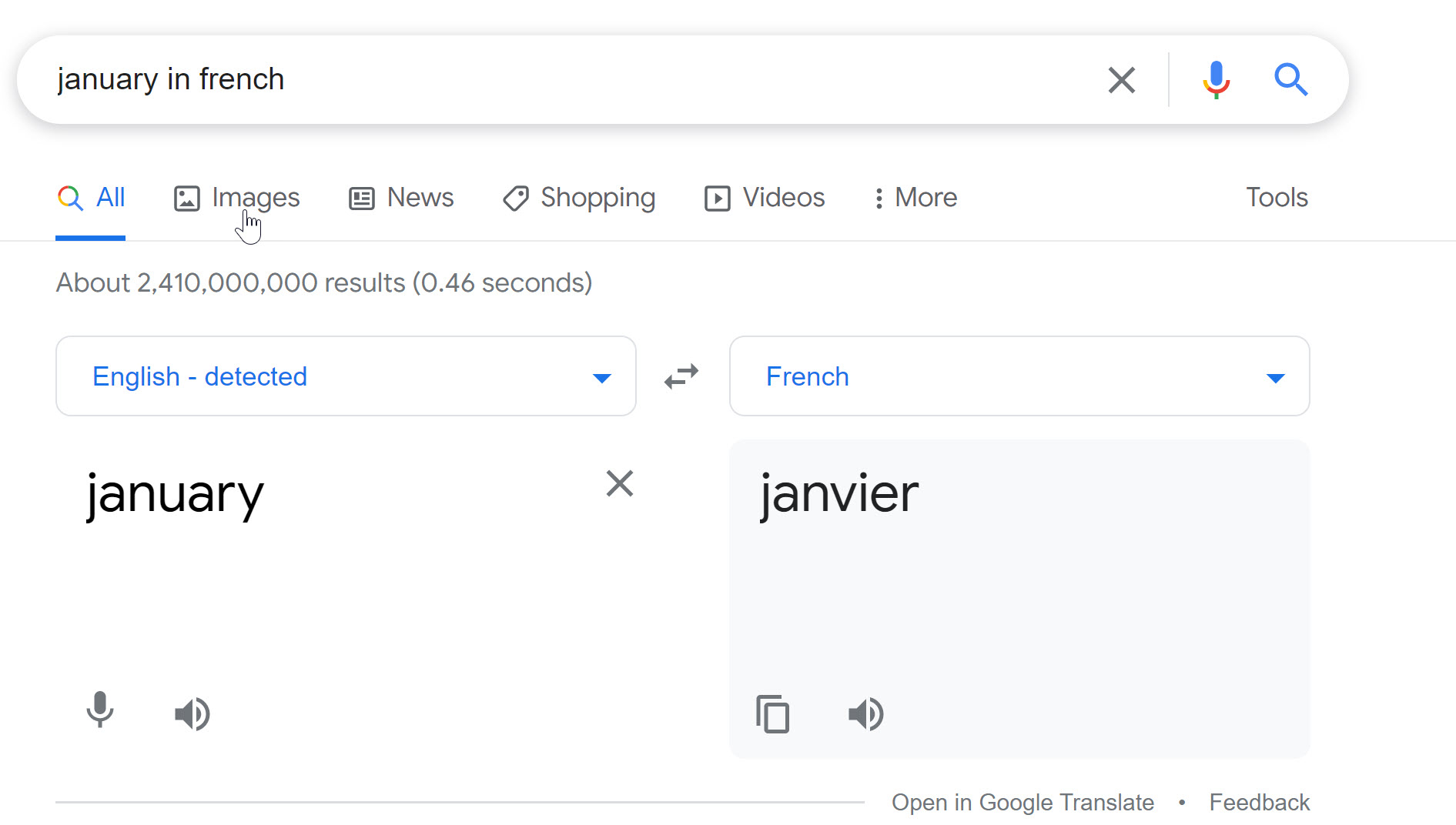 Now, we did a search which asked "When did France have its first COVID case" and the search results all said "24 January 2020."  There are a plethora of public news media stories verifying this outbreak date.   Even Wikipedia (as of 6:32 PM EDT on Sunday, August 8, 2021) shows the same date as seen in the screen shot below (LINK HERE):

So how did the government of France know there would be a Vaccine Passport in the country four days before a disease outbreak even hit?

The __only__ possible explanation is because they KNEW there would be a disease outbreak named "COVID-19" because that's the disease name printed on the posters.  Logic dictates that the only way they could have known the specific name of the disease - before it hit -- is because the outbreak of a disease called 'COVID-19" WAS PLANNED.

It had to have been planned.  How else would government know to put that disease name on the public posters, four days before the disease even hit the country?

Now, some may say they knew the name because the World Health Organization had named it while the outbreak was still in China.   Not so fast . . . .

Here's the link to prove it to yourself (HERE)

More importantly, how would the French Government know for certain they were going to implement a Vaccine Passport (and thus had signs printed for the general public ) . . . four days before the disease ever hit the country . . . unless that too was planned?

(Hal Turner Remark: They are caught.  Red handed.  Right here with this news story, what you just read.  We caught them dead-to-rights.  The governments did it on purpose.)

Early-on, there was rampant speculation that this COVID-19 outbreak was a Bio-Weapon that either escaped, or was released, from the Wuhan Virology Laboratory in China. That was fiercely denied by China, and no one, in any western country, is officially looking-into that.

Now, however, we see that government in France, and perhaps elsewhere, knew full well this disease outbreak was coming and even knew the name of it, and had public posters for a VACCINE PASSPORT printed even before the disease hit!

It is now appearing, based on this irrefutable evidence, that this whole COVID-19 situation is, in fact, a Bio-weapon attack; but is NOW seems the attack has been launched by OUR OWN GOVERNMENTS against the general public.

If that is the case, then the general public would have the right to attack back in their own self defense.

It is worth noting that illegitimate US President Joe Biden told reporters today "Vaccine Mandates Are Lawful, Effective and Based on Rock-Solid Science and Constitutional Law", as he announced that his administration, including the Department of Justice, were looking for ways to enforce a legal mandate that required all US Citizens to get vaccinated or face steep penalties.

"Trump didn't go far enough, he gave people a choice in the matter and that's not the correct way to do things", Biden said while addressing members of the press.

He made this statement despite Documented 12,242 DEAD from the COVID "vaccine" in the USA alone as of July 30, 2021, as proved by the Vaccine Adverse Events Reporting System (VAERS) as reported HERE

Worse, literally THOUSANDS of people who are fully vaccinated, have come down with COVID-19 anyway, showing the vaccine does not seem to work!  In New York State alone, weeks ago, the state Health Department revealed at least 8,700 "breakthrough cases" of COVID-19 in the fully vaccinated (Story Here).

Just this morning, August 8, 2021, a Carnival Cruise Line ship named "Carnival Vista" revealed that the vessel is presently having an outbreak of COVID despite ALL passengers and ALL Crew being vaccinated!   (Story Here)

Overseas, in Israel, Dr. Kobi Haviv, on Channel 13 in Israel said today: "95% of seriously ill patients are vaccinated. FULLY VACCINATED PEOPLE account for 85-90% of hospitalizations. We are opening more and more COVID wards. The effectiveness of vaccines is decreasing or disappearing.”

All of which brings us back to the signs in France, printed four days before France had any COVID-19 outbreak.

Someone knew.  Someone knew well enough in advance to ORDER the printing of those signs.  The signs themselves show them as being printed on 20 January 2020.  How much lead time was needed before the printing was done?  That's how much farther in advance they knew how this would go.

How did they know how it would go?  Because, dear Reader,  THEY planned it.   There is no other explanation.

This COVID-19 is a planned bio-attack BY GOVERNMENTS upon the citizens of the world.  It is time to respond appropriately to these murderous thugs.

Clearly the vaccines do not appear to work, and common sense tells us that if only the vaccinated are getting severely sick, it must be the vaccine itself causing it.

Yet, Government ignores these realities, continues lying that the vaccines are "safe and effective" and keeps jabbing them into people's arms.  And people keep dying.   How much longer does this pattern of behavior have to repeat itself before common folk realize we are being systematically KILLED?

It seems to some people that anyone who takes the vaccine from this point on, is willingly lining up to be slaughtered.

Oh, and in case you have any doubt at all the political class is deliberately perpetrating this COVID-19, and the phony "mask mandates" in spite of knowing the whole thing is of THEIR doing, take a look at former President Barack Obama's 60th Birthday Party held at his estate in Massachusetts yesterday, Saturday, August 7, 2021.   Over 500 political elites and NOT ONE MASK in sight AT THE PARTY.   Oh, sure, they wore them prior to entry for the cameras - to put on a show.  But once they were inside, and presumably out of camera view, off the masks all came.   They're laughing at you! 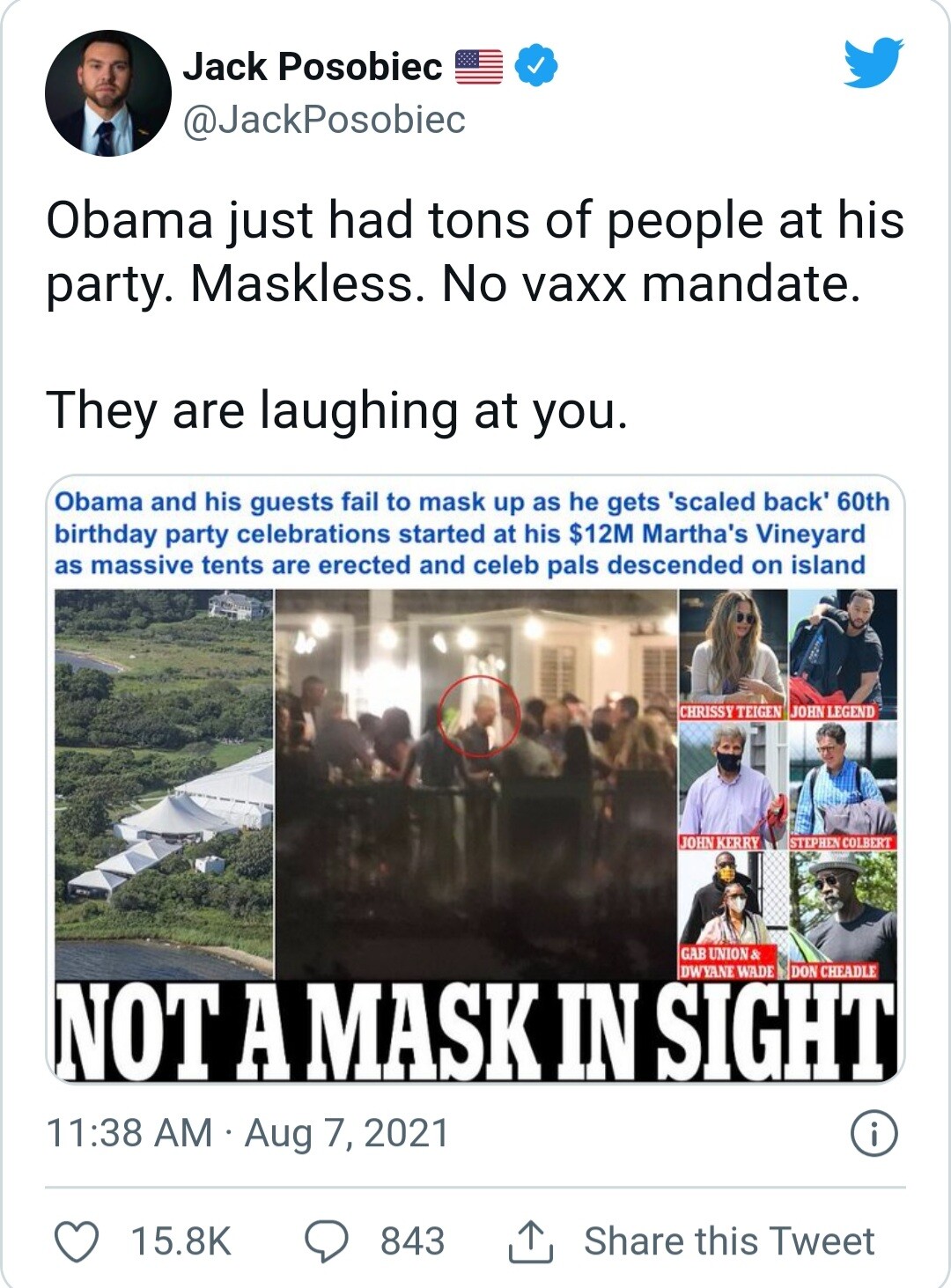 They've wrecked your jobs and businesses with lockdowns that were never necessary.  They wrecked your personal savings as you drained your resources to pay your bills while out of work or your business was forced closed.  They made your kids stay home from school for a year and are now pushing masks when they go back to school next year.  But for THEMSELVES . . . none of that bullshit.

It is literally us against them.  They have defrauded us out of our freedom.  They have smashed our personal finances.  In many cases they have wrecked our personal credit as we exhausted our resources and had to resort to buying food on credit cards.  And there they are, in the photos above partying away, no masks, laughing at us.

We have now caught them.  They printed signs in France for a Vaccine Passport four days BEFORE the outbreak ever hit France.   They used the name "COVID-19" on those signs, twenty one days before the disease was even NAMED "COVID-19" by the World Health Organization.

This COVID situation is a PLANNED attack upon citizens of the world by governments.

They MURDERED hundreds-of-thousands of people in countries all over the world.

Their so-called "vaccine" is still killing people every day.

They have injured hundreds of thousands of other people all over the world; some permanently.

They did this deliberately and they knew they were going to do it because they printed signs for a Vaccine passport before the disease outbreak even hit, and used the name COVID-19 on those signs 21 days BEFORE the WHO even named the disease COVID-19.

They are caught. They are guilty.

Guilty of Mass-murder; with the disease they knew was coming because they had to have released it, and with their vaccine that does not protect and is still killing people.   These are Crimes against humanity.

They're gathered together at places like a former President's Birthday party, with no masks and no social distancing because they know the truth.  They're laughing at us.

We should have the last laugh.

This will be the lead story on Monday's Hal Turner Radio Show, live from the New York City metropolitan area,  heard on global shortwave in 70 countries around the world, and in the USA on KYAH 540 AM in Utah.  The show is also streamed live on the net for FREE to all.

It takes a massive commitment of time and resources to bring you this cutting edge news.   I have no commercial sponsors.  This endeavor is made possible because folks like you SUBSCRIBE for a buck a week, billed quarterly ($13).   It's a trivial amount which most folks won't even miss.  But it means the absolute world to this web site and its ability to remain in existence.

You aren't hearing these facts from ABC, NBC, CBS, CNN, FOX.  You aren't reading it in the New York Times, Los Angeles Times, Chicago Tribune, Miami Herald, Boston GLobe or any other major newspaper.   You aren't being told about this by the big wire services like United Press International (UPI), or the Associated Press (AP) or even REUTERS.   You are getting this vital information right here.

If you value the truth, if you value factual, verifiable information, I implore you to support this endeavor with a buck a week subscription HERE

Set a reminder in your phone to Tune-in at 9:00 PM eastern US time (New York City Time) as follows: