Financial behemoth Goldman Sachs issued a rare Sunday Warning, informing its clients that ". . . if the short squeeze continues the entire market will collapse."

They are apparently talking about the ongoing pressure being felt by investment brokerages involved in the GameStop (GME) short squeeze which is still taking place.

But the people who spearheaded the GME squeeze have already begun a SECOND and far more massive "squeeze" in the physical Silver Bullion market.

Since Friday, the folks who follow WallStreetBets, announced they intended to engage in another squeeze, involving physical silver bullion.  They began telling each other to "buy bullion and take delivery" knowing full well there isn't nearly enough physical silver in the markets to cover a sudden increase for bullion to be physically delivered.

One of the more prominent sellers of Bullion is KITCO and they initially had a notice declining further sales, then changed their web site to reflect the simple facts:  SOLD OUT.

Yes, you read that right.  KITCO is SOLD OUT of all its silver bullion.   ALL OF IT.   There's nothing left.

Dealer after dealer worldwide is seeing intense demand as small investors pull money OUT of stocks because the GME Squeeze demonstrated that the stock markets are rigged and not trustworthy.

Those millions of small investors then started plowing their money into physical silver, and in less than 48 hours (and on a Weekend) ALL the silver is gone.

When the Commodities futures market opened at 6:00 PM eastern US Time on Sunday night, Silver jumped right out of the starting gate, rising about 1.80 an ounce at the time of this article at 6:35 PM.  That's about a 6.8% rise in a half hour.

The "squeeze" being done on Silver Bullion is designed to specifically target one particular group: Banks.

The world knows that Bankers have been artificially manipulating the silver market for DECADES.  They have routinely been fined by governments for such conduct, but still the conduct persists.

Here's a quick chart for the average person to see how the Silver Market has been manipulated by Banks: 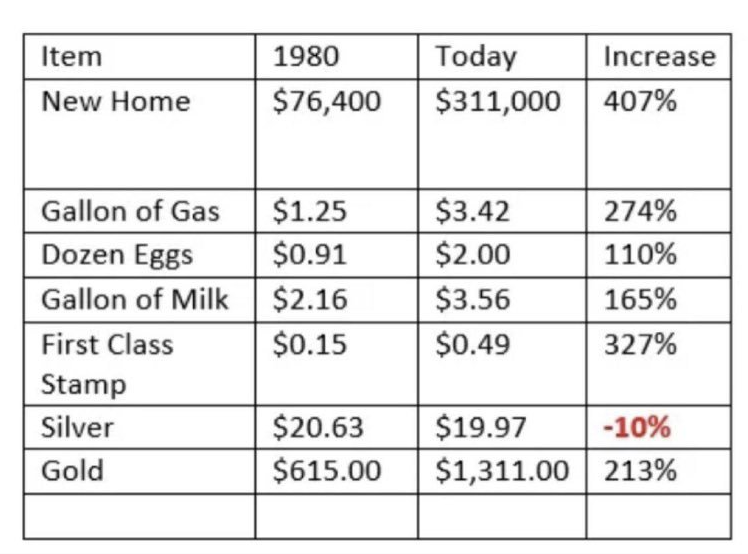 So clearly the market for Silver has been grossly manipulated.   But why?

Well, Banks use silver to make money for themselves.  They BORROW an ounce of silver from someone with the promise of paying it back by a fixed date.   Then they SELL the ounce they borrowed, figuring the price will go down (because they manipulate markets.   When the price goes down, they BUY IT BACK, cheaper than they sold it, give back the ounce they borrowed, and pocket the profit.

The little-guy Investors have seen this and known about it for years.  But only now that the rigged stock market became so grossly evident, have little-guy investors started teaming-up to "squeeze" things like this.

What the little guys are doing is focusing individual investors on a specific target stock, or in this case, bullion, because they know so many OTHER investors are going "short" . . .  betting the stock/bullion will DECREASE in value.

So when a slew of little guy investors start buying up that particular stock or bullion, the price goes UP.   This harms the investors like banks, who want the price to go down, because if the price goes UP, then it will cost the bank more to buy the stock back than it cost them to buy it.  Not only won't they MAKE money, they'll LOSE MONEY.

Sometimes, wealthy Investors (like Hedge Funds and Banks) who are LOSING money on their short options, start having to BUY the exact stock they went short on, so they have stocks to pay back the ones they borrowed.  This has the effect of causing the stock price to go even higher!

In the end, Investors who went "short" can lose all their money . . . . to the little guys who bought up all the stocks.

It is a form of forced wealth re-distribution from the rich investor class, to the common, average, little guy class.  And the big guys don't like it.  At all.

That's why, when the GameStop GME "squeeze" took off last week, the big guys did everything they could to stop it.

Well, that roiled people but good. To understand why people are so motivated to go after the banks, read this one posting in the Reddit /WallStreetBets sub-group which explained why this little guy was going after them: 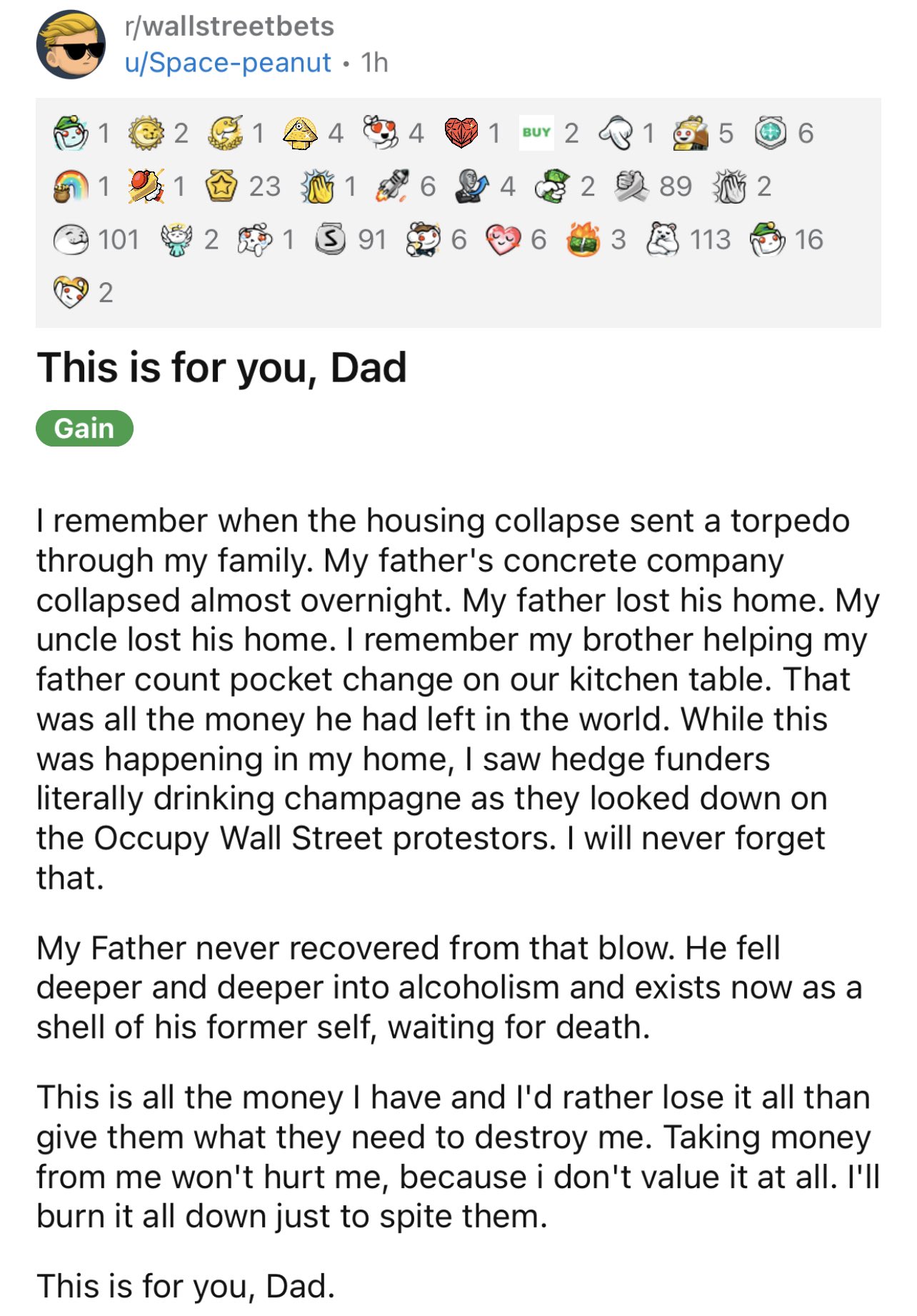 So the little guys are motivated not by greed, but rather by the desire for REVENGE.   Revenge for the past banking debacles that wrecked whole industries.  Revenge for liberal bankers and left-winger Hedge Funds giving hundreds of millions to help Biden STEAL the election.  Now, the Little Guys have gotten together to "go for the jugular"  . . . the banks.

The way they knew it could be done: Silver Bullion.  Silver is "shorted" to the extreme by Banks.  If Silver rises in price, it will WIPE OUT the Banks.

Now, these Little Guys have actually begun squeezing Silver bullion.   And the biggest of the big guys, firms like Goldman Sachs, are now openly warning this could "collapse the entire system."

One Banker, believed to be from JP Morgan Chase, warned on one of the "Chan" Boards that people didn't have a clue what they were doing, and they would end up smashing the entire banking system if they didn't stop. 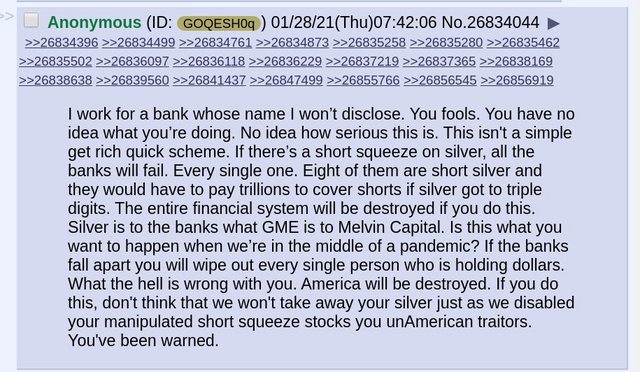 The average person has "had it"  with the system.  A system that is rigged for the wealthy to protect the wealthy, and do so by screwing the little guy.

Now the little guys are banding together and sticking the wealthy right in the heart.

To quote one little guy "I'd rather burn the whole system to the ground just to spite them."

When THAT is the mindset of people doing financial battle, things are going to get ugly, fast.

This will play out over the next week or two before the SHTF.  But the S will HTF  if this continues.

The suits are scared, boys.   They should be.

Another common guy posting on GAB, put it this way:

The global elites want the great reset- take our money and make universal basic income. We will give them the great reset, and collapse their Ponzi scheme that is the federal reserve (world banks)
When all is in ashes we will then re-establish our currency- locally based and back by Gold or something else that can’t be multiplied endlessly. Time to get back to sound money and trade. Universal basic work.
You don’t eat unless you work.
Message to the bankers- you better buy gold and silver, those dollars will be used to keep the fire going in the winter when this is over.
You shouldn’t have rigged the election, you shouldn’t have rigged the financial system, you shouldn’t have ignored the constitution, and most of all- You Shouldn’t Have Turned Your Back On The HOLY BIBLE.