For the second day in a row, the Israeli military has launched what even seasoned observers are calling "intense" Signals Intelligence aircraft.  These planes are ***generally ** used immediately prior to an attack mission.

As of 8:25 PM eastern US Time, the following Israeli sig-int aircraft are airborne:

Those familiar with the ads b service will find this aircraft IS chart useful: 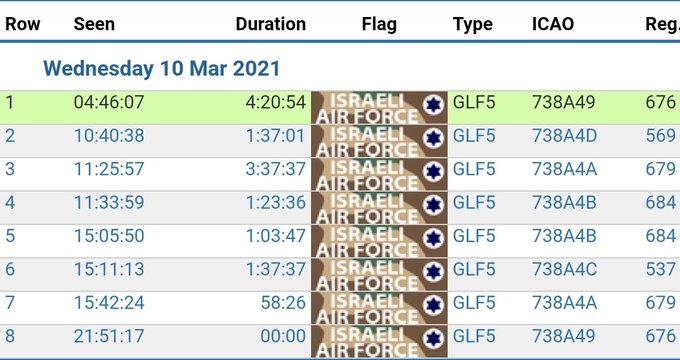 These aircraft appear to be operating in an area which would indicate whatever strike may be in the works, would LIKELY be inside Syria.

Russia has formally and publicly told Israel to halt its attacks inside Syria.  Russia even stated they would "raise fighter jets" to chase-away attacking Israeli aircraft and, if necessary, might even FIRE UPON such attacking aircraft.

Israel apparently did not take that warning seriously, and has engaged in attacks despite having been warned.

The sheer size of the present sig-int deployment indicates the Israelis are planning something quite large.  If that's correct, the Israelis might trigger a Russian intervention and THAT would change the situation in the Middle East dramatically.

One of my former colleagues during my years working national security intelligence with the FBI Joint Terrorism Task Force told me tonight: "Yesterday was probably recon. Tonight might be another surveillance mission."

He then got quite specific and said "It is clear from where they are looking and what frequencies they're probing that they are looking for Russia Anti-Aircraft systems.   They might be doing that so when they do bomb Syria their jets won't get shot down. That's my educated guess.   Of course, if yesterday was enough surveillance, then tonight would likely mean an attack is imminent. One of the two."

For our part, we should point out that this Saturday is a New Moon in that area of the world.  A New Moon is when the night sky is darkest.

More info if we get it. Stay tuned