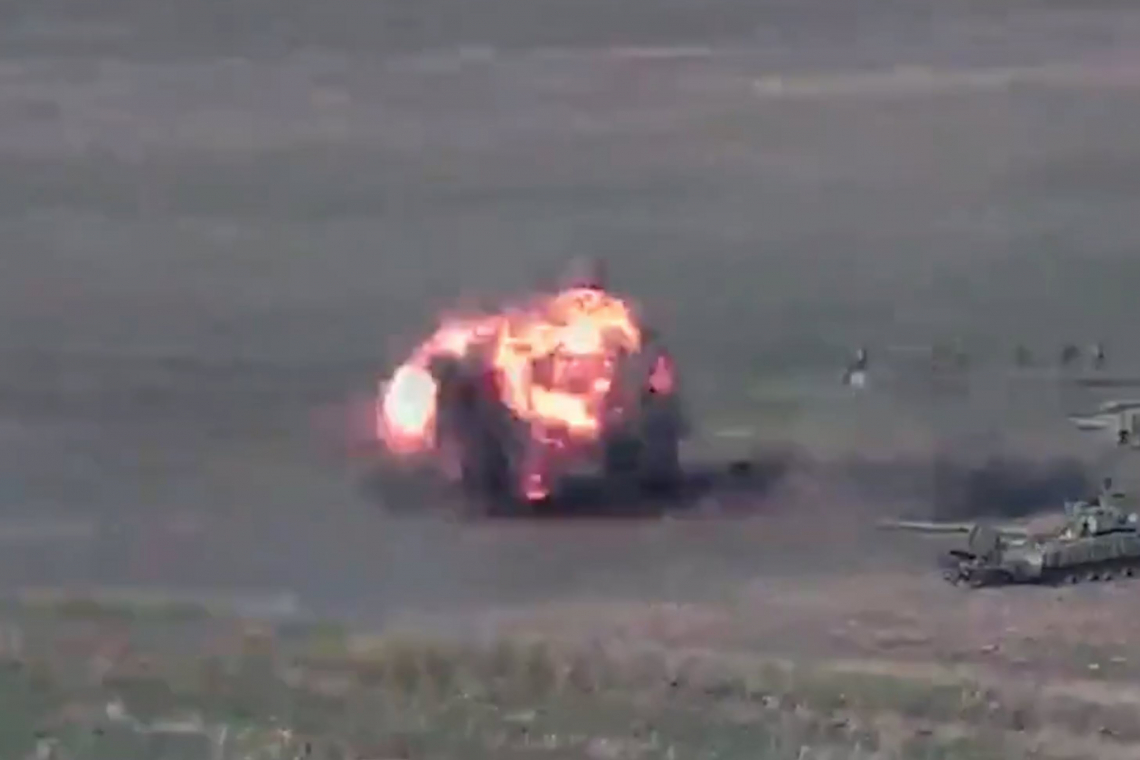 Armenia blames Azerbaijan for attacks on civilian settlements in the Nagorno-Karabakh region, and says its troops downed two Azerbaijani helicopters and three drones in response.   When this took place, Azerbaijan fought back and now, there is very heavy fighting between the two countries.

President of Azerbaijan set to address the nation shortly according to reports.

Artsakh, officially the Republic of Artsakh or the Nagorno-Karabakh Republic, is a breakaway state in the South Caucasus that is internationally recognized as a part of Azerbaijan.

There are now reports that Martial Law has been declared there.

Strangely,  the head of the Armenian Defense Ministry David Tonoyan has reportedly fled the country. This reports were published against the background of the full-scale renewal of the Karabakh war with Azerbaijan by the Armenian troops.

It is not yet known whether Tonoyan fled from Armenia before the outbreak of hostilities or during the first shelling of Azerbaijani villages, as a result of which Azerbaijani citizens were killed and wounded.

Russia calls on Armenia and Azerbaijan to end escalations and begin talks as #zerbaijan announces it has the full support of Turkey.

To give readers perspective on what's at stake, here is a map of the region.  The area in Red is disputed territory between the two countries. 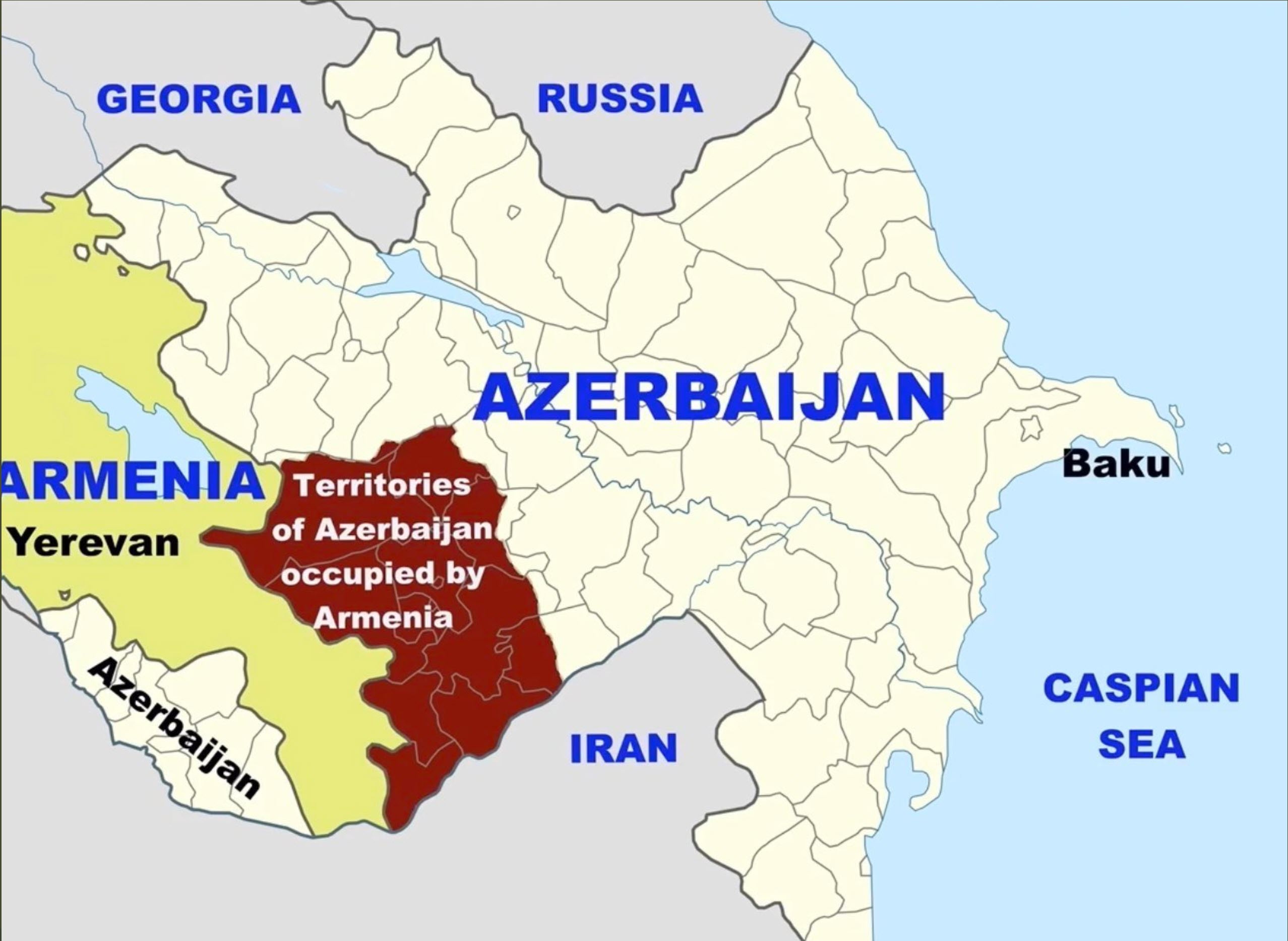 Hal Turner Remark: The media reports coming out of this area are rife with inaccuracies and blame from both sides.  It is said that "truth is the first casualty of war" and in this case, it sure seems that way.  For all the information coming out right now, it is VERY hard for me to determine who did what to whom, first, and why.   Reporting this conflict is NOT going to be easy from a factual standpoint.  I must cvonfess that since Azerbaijan has the full support of Turkey, it appears TO ME that they are already in the wrong.  I don't trust Turkey as far as I can throw it and anyone connected with the Turks are therefore viewed badly by me.

The Prime Minister of Armenia calls on citizens to prepare to 'defend the sacred homeland.' General mobilization and martial law declared.

The general con census coming out of the region is that, supported by Turkey, Azerbaijan has just started a war against Armenia in-order to occupy Artsakh/NagornoKarabakh. For now, Azerbaijan has lost a Mi-8 transport helicopter, a Mi-24 heavy attack helicopter, 3 UAVs & over 20 Syrian mercenaries!  However, Turkish Defense Minister Akar says: "Armenia attacked Azerbaijan with a violation of the ceasefire and again showed that it was after a provocation. The biggest obstacle to peace and stability in the Caucasus is the aggressive attitude of Armenia and it must immediately cease this aggression that will set the region on fire.

Hal Turner Remark: This is dangerous. We are heading towards Russia vs Turkey in very short span of time. (Both will have to protect their sides).

Another helicopter from Azerbaijan has been shot down: 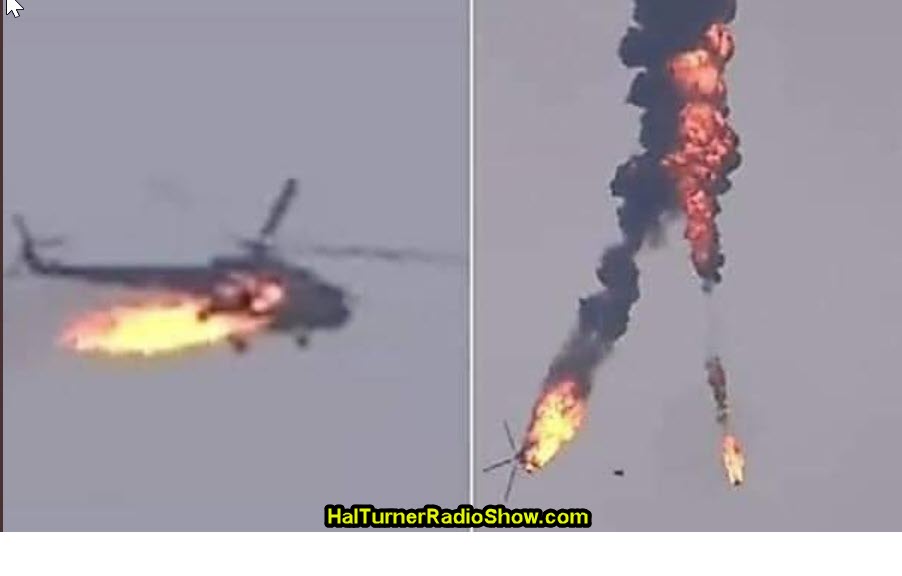 Massive reinforcements have been sent by Armenia, including rocket launchers to the front line with Azerbaijan as a open war begins.

In a dramatic and extremely dangerous escalation, Turkey has sent a military drone deep into Armenian territory. 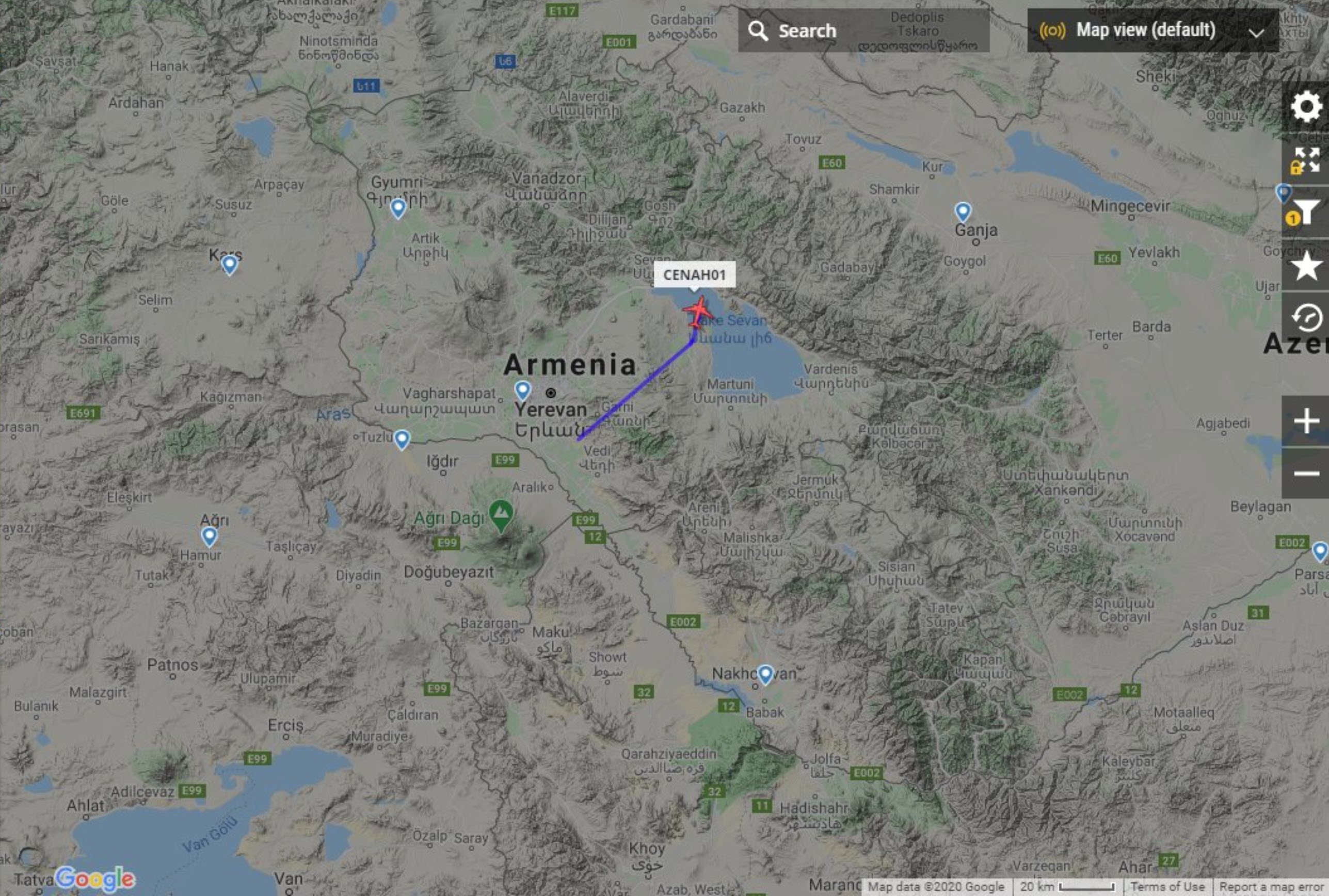 The drone has not fired, but even if it is only Intel, the fact that Turkey is doing this against an ally of Russia brings this new conflict into sharp perspective.  This "war" is growing, fast.

FYI: Armenia is 97% christian while Azerbaijan is 95%+ Muslim.

Azerbaijan is cutting-off the Internet, to block information getting out to the world: 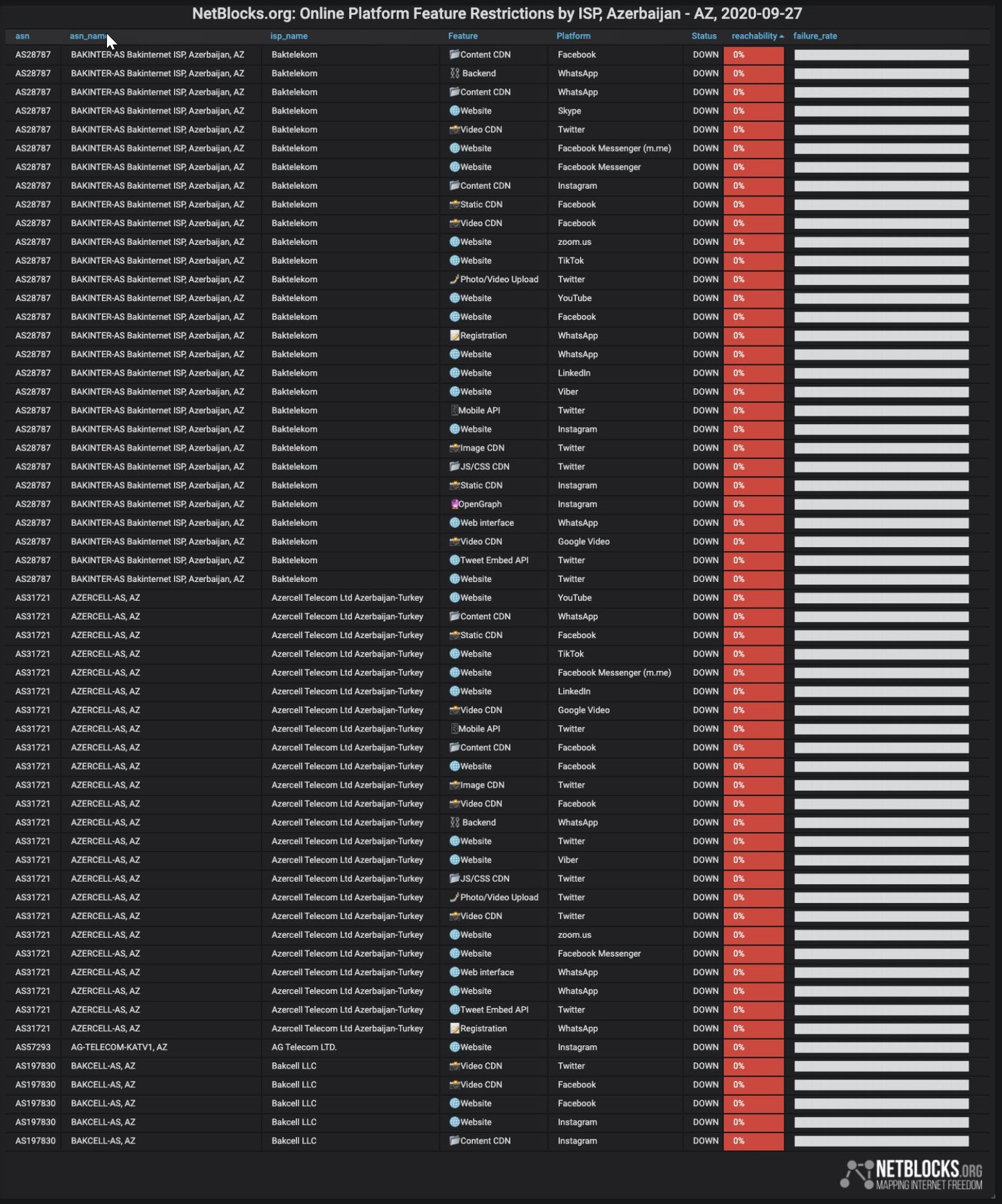 The Defense Army of Artsakh  reports that the enemy has great losses of manpower and armor. The units of the Defense Army destroyed 4 enemy helicopters, about 15 UAVs, including strike, 10 tanks, and a combat vehicle.

Russia has sent a heavy military transport to Armenia . . . this is direct military reinforcement of Armenia by Russia.  This conflict is escalating so fast, heads are spinning.

The European Union (EU) on Sunday called for an immediate halt to border clashes between Armenia and Azerbaijan.

"The European Union calls for an immediate cessation of hostilities, de-escalation and for strict observance of the cease-fire," EU foreign policy chief Josep Borrell said in a statement.

Deputy Minister of Defense of Nagorny Karabakh Artur Sarkisyan: 16 dead and about 100 injured on Armenian side to the moment

Armenia’s MoD says that Azerbaijan is now employing its largest caliber MLRS, including the Smerch, Belarusian Polonez and the T-300. This is serious. Armenia’s and Azeri MLRS have range 100KM+. This would mean that the strikes will take place deep in Armenia / AZB

This is a GIGANTIC escalation.   Russia is stepping directly, openly, and forcefully, into the armed conflict.   Russia knows Turkey backs Azerbaijan, and Russia is now openly sending its best troops to wage war against Azerbaijan in defense of Armenia.  Direct, open conflict is now unavoidable between Turkey and Russia.

• State of emergency, general mobilization of the population declared

• A state of war and curfews have been declared.

According to verified reports Azerbaijan has about 200 casualties and more than 30 pieces of destroyed military hardware.

US condemns escalation of violence between Azerbaijan and Armenia, urges both sides to cease hostilities immediately

This is 14-15 hours straight of combat , they probably are going to fight through the night , holding positions while reinforcements pull up and then we will see much more intense fighting at sun rise there in about 7-8 hours.

Reports state that the entire nation of Azerbaijan is now under martial law amid major fighting with Armenia.

Artsron Hovhannisyan, the spokesman for the Armenian Ministry of Defense, announced in a press briefing that Armenia will, if necessary, use all kinds of weapons in response to the aggression, including Su-30SM fighters.

In response to journalists’ question about the possibility of using fighters, Hovhannisyan indicated that the military and political leadership of Armenia is in complete control of the situation in the conflict zone in Nagorno-Karabakh, and “if necessary, all kinds of weapons will be used.”