How Did Astra-Zeneca Manufacture "COVID-19 Vaccine" in July of 2018 Before the Disease Was Even Discovered or Named? 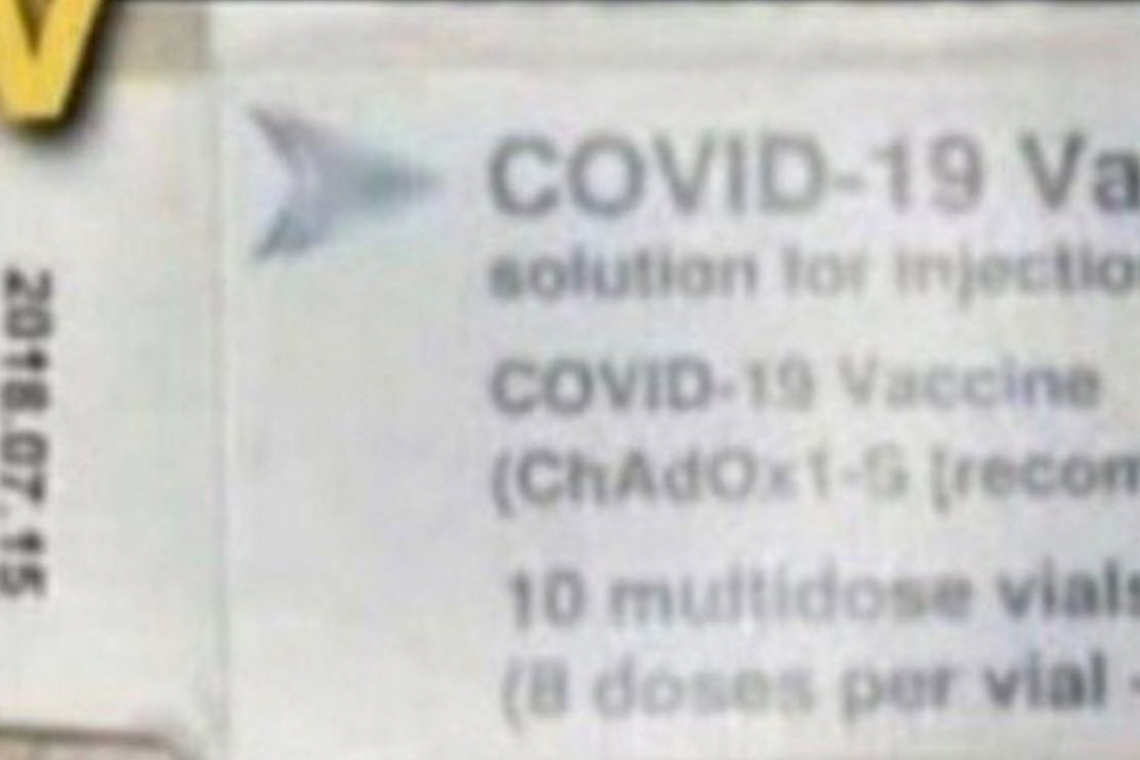 Blacks and rednecks are more likely to survive this biomedical hell:

https://healthimpactnews.com/2021/nba-star-kyrie-irving-gives-up-over-100-million-to-refuse-covid-shot-stands-with-black-community-in-new-york/
# Like them or not, here is another group of likely survivors — Man of the Atom 2021-10-14 02:23
The Nation of Islam, black Muslims in the USA.

Here are a few excerpts: "Big Pharma did not want doctors to properly treat you, so you would be forced to wait on and take their so-called “vaccines.” Before they were officially deployed in December of 2020, the Honorable Minister Louis Farrakhan warned humanity to stay away from the “vaccines.” He declared they were Death, a part of the U.S. Policy of Depopulation. He called for scientists to investigate what was in them. ... And for all the death and injury they have already inflicted, these so-called vaccines do not even protect you from getting or spreading COVID-19."

This link also mentions a group of 3000 physicians signing a declaration in Puerto Rico "presented to them by Dr. Robert Malone, architect of the mRNA vaccine platform."
# Now to be honest, I know a number of people who are still walking around, none the worse for wear after being "vaccinated" — Man of the Atom 2021-10-14 02:43
This means I do not know "for a fact" that these people will "start dropping like flies" (hit by bug spray) but I fear that some of them will have "complications" that will be denied as having anything to do with the "vaccines", and it is very clear to me from the stories and USG's own statistics that a big group of people have died or had reactions (some horrific) following the shots. I note employees of Pfizer, Johnson & Johnson (?), the White House, plus Congress critters are not told they must be "vaccinated". This gives us a clue that something "not kosher" is going on here.
+1 # Honest, Truthful and Just — White Lightning aka Raptor 2021-10-13 23:42
SHOCKING!!! Dr. Carrie Madej has found RNA-modifying nano-technology, graphene oxide, transhumanism technology, PEG (Polyethylene Glycol), SM-102, luciferase, parasites and technology derived from fetal-tissue cell lines.
Hydra (Hydra vulgaris) Seven Headed Dragon
https://www.brighteon.com/de8c541e-f344-40b5-b498-5b5ef9afd656
# Heil Hydra — White Lightning aka Raptor 2021-10-13 23:46
Seven Headed Serpent
+1 # RE: How Did Astra-Zeneca Manufacture "COVID-19 Vaccine" in July of 2018 Before the Disease Was Even Discovered or Named? — now and zen 2021-10-13 22:50
https://rightsfreedoms.wordpress.com/2021/04/18/atomic-bombshell-rothschilds-patented-covid-19-biometric-tests-in-2015-and-2017/
+1 # 2015 Rothschild patent — now and zen 2021-10-13 22:47
There's documents online showing that test kits were in the works circa 2015-17. With the Rothschild name on the documents. And according to Catherine Austin Fitts, the billionaires voted to go ahead with the "Going Direct Reset" at Jackson Hole in August 2019. Then they did Event 201 as the dress rehearsal, and soon after we had the Certificate of Vaccination ID beginning.
+1 # Dr Tenpenny - Hospitals Are Now Kill Factories And Doctors Are Murderers — Palehorse 2021-10-13 22:01
|

Will America Exist in 10 or 20 Years? Probably Not

"Those people are white people. Their future is death and obliteration. And the dumbshits sit there, with guns in their safes, sucking their thumbs, voting for Democrats, taking the death jab, sending their kids to public schools and universities to be brainwashed against white people."

"Such a people are already dead."

https://www.paulcraigroberts.org/2021/10/12/america-a-dead-man-walking/
+1 # RE: How Did Astra-Zeneca Manufacture "COVID-19 Vaccine" in July of 2018 Before the Disease Was Even Discovered or Named? — Raio81597 2021-10-13 15:01
They released propaganda. The bio-weapon was the vaccine, people believed there was a pandemic, so they feared so much of death they they gladly lined up to take a shot they little did they know would kill them or injure them in the future. This was planned a long time ago. Jacques Attali in his book Verbatim vol. I as a Bilderburger, talked about planning a pandemic where people would think it was in there best interest to kill themselves, due to a pandemic.
# GATES CAUGHT ADMITTING VACCINE CHANGES YOUR DNA — White Lightning aka Raptor 2021-10-13 12:17
Human Implantable Quantum Dot Identification MARK which Requires Enzyme called Luciferase
https://www.brighteon.com/036182dd-4492-4fdd-9d8b-39c5ee5c295b
+3 # Lying, Stealing and Murdering — White Lightning aka Raptor 2021-10-13 11:46
I Imagine the day I will be Governed by God again. I Hate and Despise Satan and his Lying, Stealing and Murdering.
+2 # so sad — cowgirl 2021-10-13 11:36
this is so criminal. I was in lowes yesterday and a young girl, check out person said the world is in trouble , it is the end.... does not know if she should ever have children.. young adults are not seeing much hope for the future. this was a young arabic girl looked like a refugee trying to work for a living.. very depressing to hear all of this from the young people and see the criminals that started all of this... pray for the everyone , except the criminals ... pray they get arrested and put in jail.
+2 # Silly Tin Foil Hatters — Kali K 2021-10-13 11:17
That's the manufacturing date of the box. THEN the printed it afterwards with what went in it when it was needed.

At least that's what the normies will say in order to try and debunk it. I wonder how many responses I will get because people won't finish reading past the word 'needed.'
# Labels — TheProphet 2021-10-13 11:30
I took over an IT position and had to use labels on new equipment. The equipment was new, the labels, they were 5 years or so older. So, I would agree, it is possible these box labels were printed when the boxes were ordered and the adhesive labels added later. It could also be an oversight on the person creating the labels in a spreadsheet before printing...

It could just as easily be the real date that the labels were printed prior to the release of the Bio-weapon. Who really knows. But, it does make for some interesting headlines.
# RE: Silly Tin Foil Hatters — njc 2021-10-13 11:27
Quoting Kali K:

That's the manufacturing date of the box. THEN the printed it afterwards with what went in it when it was needed.

At least that's what the normies will say in order to try and debunk it. I wonder how many responses I will get because people won't finish reading past the word 'needed.'

From the "alternate explanation department" that the possibility that either the photos have been altered, the box was printed in error, or the date was not printed at the same time as the rest of the box should be considered and if possible, disproven.

Things are so backwards these days. With the vaccine, any damage or deaths caused by them have to be proven that it was the vax. It's BACKWARDS! It should be that the vax companies have to prove it wasn't!
+1 # Event 201 — Pierre Derelicto 2021-10-13 10:22
... another blueprint:

Governments and the private sector should assign a greater priority to developing methods to combat mis- and disinformation prior to the next pandemic response.

Governments will need to partner with traditional and social media companies to research and develop nimble approaches to countering misinformation. This will require developing the ability to flood media with fast, accurate, and consistent information. Public health authorities should work with private employers and trusted community leaders such as faith leaders, to promulgate factual information to employees and citizens. Trusted, influential private-sector employers should create the capacity to readily and reliably augment public messaging, manage rumors and misinformation, and amplify credible information to support emergency public communications. National public health agencies should work in close collaboration with WHO to create the capability to rapidly develop and release consistent health messages. For their part, media companies should commit to ensuring that authoritative messages are prioritized and that false messages are suppressed including though the use of technology.

The french COVID Sanitary Pass Sign is STILL online on their governmentserver!
.
# Old article — selah 2021-10-13 09:57
Though this article is from June 2020, there were some interesting bits of info in it
https://www.dailymail.co.uk/news/article-8466195/Pictured-Covid-19-hijacks-human-cells-causes-sprout-TENTACLES.html
+3 # Patent Applications — Pierre Derelicto 2021-10-13 09:48
There is also equally telling evidence in the patent applications surrounding the vaxes.

By law, the vax manufacturers must publish a "Safety Data Sheet" -- and display it in the public domain. When you consider what action Pfizer recommends for medical personnel handling it who come in contact with on their skin, or inhale the vapors from it, it's difficult to come to terms with how anyone could possibly consider it safe to inject into any living being.

https://safetydatasheets.pfizer.com/DirectDocumentDownloader/Document?prd=PF00092~~PDF~~MTR~~PFEM~~EN&fbclid=IwAR0f6GsRXdYq2wujjgtvE9HEfijtOjbvpptmGHE-42_Q8SpZIEAUPORUsyE
+2 # Good Research Job, Hal — brucetheobald 2021-10-13 09:25
Bravo.
+2 # From the first week of lockdown.. — Lexie 2021-10-13 08:45
Took me a week to become suspicious of the whole thing beginning with the flood of videos coming out of China . A closed society at best that won't even let a fart leak out but suddenly it was open session..soon ,once job was done ,they shut it all down again. I think even then I was slow on the uptake but better late than never hell I even applauded the nurses once on a designated thursday ..shame on me. Thankyou for your diligence Hal ..I just hope some will accept they have been conned from this evidence however I fear for far too many its far too late.
+3 # RE: From the first week of lockdown.. — carlireland34@gmail.com 2021-10-13 09:19
I am frustrated too. I just posted 5,000 American die per week - with solid time correlation to vax shots. No correlation to covid19.
Just what proof does it take - that was a smoking gun for me.
+3 # RE: How Did Astra-Zeneca Manufacture "COVID-19 Vaccine" in July of 2018 Before the Disease Was Even Discovered or Named? — ebelfer52 2021-10-13 08:12
And dont forget there was a resent leaked story that as many as 200 of our national reps and staff and family members got ivermectin to have so they could treat themselves if became sick. That would help explain why none of our elderly elected officials have died from this virus
+2 # RE: How Did Astra-Zeneca Manufacture "COVID-19 Vaccine" in July of 2018 Before the Disease Was Even Discovered or Named? — carlireland34@gmail.com 2021-10-13 09:28
The elderly die because the drug the CDC recommends kills them. Experimental Rendesivir $2,300 treatment, causes renal failure.
+1 # "V" made for covid — mylesodonnelljr 2021-10-13 06:38
https://www.trunews.com/stream/tentacle-tuesday-is-there-a-thing-in-covid-vaccines
# Thank you — codeblue 2021-10-13 19:13
Very good linked source
+1 # Ultimate confirmation — notme 2021-10-13 05:39
https://www.culture.gouv.fr/Media/Medias-creation-rapide/KAKEMONO-M1.pdf2
+4 # Day of Judgement — Adster 2021-10-13 05:03
As frustrated as i am , i resign to the fact that ultimately it is all in the Lords hands... and all these people involved ; the fury and wrath of Gods judgement on their ass when they stand before Him.... their ass is gonna burn for eternity with torment, sorrow, and gnashing of teeth.
+1 # The Event 201 pandemic exercise, conducted on October 18, 2019, — carlireland34@gmail.com 2021-10-13 04:09
At the end of the Event 201 full account there are 7 recommendations. Number two contains.....

The poison jabs were prepared in advance AND event 201 participants gave them emergency use approval in advance.

https://www.centerforhealthsecurity.org/event201/recommendations.html
# deaths due to ‘abnormal clinical findings not elsewhere classified’ running at 5,000 a WEEK — carlireland34@gmail.com 2021-10-13 04:30
Someone ran a data scan on the CDC website for unclassifiable deaths years 2020 and 21.
Number of deaths per week around 1,000 in 2020. Author says this is so for previous years.
So, without and then with cov2 ravaging the nation - steady 1,000 deaths per week.
As the jabs increased so did the death rate - up to 7,000 a week.
These would be the classified as "excess deaths" by the medical experts and put down to covid19.

Because the weapon was developed first, then
came the means by which to deliver it.
Refresh comments list
RSS feed for comments to this post
JComments
by sur.ly
100% Trusted Informational Platform Website 2021