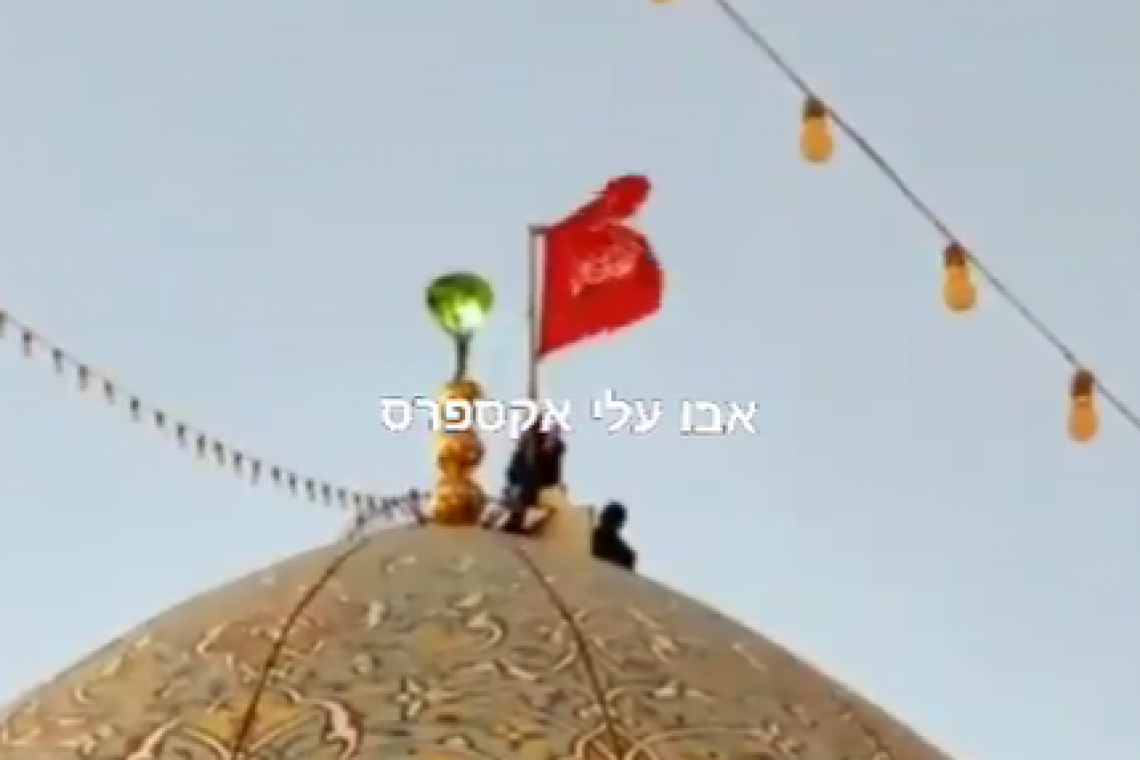 Iran has raised the Red Banner of Retaliation over the dome of Jamkaran Mosque in Qom city, which amounts to a declaration of war.

What caused the raising of the Red Banner is yet to be said.

The last time the Red Banner was raised was when Qassem Suleimani was assassinated in 2020.  After that banner was raised, Iran fired missiles which hit a US Base in the region, injuring many US military personnel.

Whatever the present issue may be, Saudi Arabia notified its US Military contacts they expect what they call an "imminent" attack against Saudi Arabia by Iran.  They are not certain if the attack will be by missiles, or by Iranian Drones.

US and Saudi air defenses are now on high alert.

A video is now actively circulating on social media in which, allegedly, over the dome of the mosque in Jamkaran (a suburb of Qom), someone raised the "red banner of retribution", which supposedly means a declaration of war.
Let's figure it out.

Firstly, the flag brought from the Jamkaran mosque in Shiraz was hoisted over the dome of the Shah-Cherakh mausoleum.

Secondly, it is not entirely correct to equate it with a declaration of war. The red flag is the colour that symbolises the blood of the martyrs and is often flown in Iran. It is deployed over mosques or during religious processions, especially during Muharram.

This flag was unfurled after the assassination of General Soleimani two years ago. Now it is being raised in memory of the victims of the terrorist attack in Shiraz. Yes, it's about revenge in a way. However, the fact that the organisers would take revenge was clear even without a red flag.

A declaration of war is a legal procedure that is much more complicated.

How many days was it?

Any chance it's related to Iranian involvement in the Ukraine

More likely in retaliation for the interference within Iran (attempted over throw) by Saudi/CIA
infiltrators armed with lots of cash.....
+4 # RE: Iran Raises "Red Banner of Retaliation" Over Mosque; Saudis on High Alert — RockyMountainBeerMan 2022-11-01 19:22
.
According to this, Iran is upset about the Saudi's reporting on the protests. Sunnis vs Shias...

https://www.foxnews.com/politics/us-saudi-arabia-high-alert-intel-impending-iranian-attack-report
+20 # RE: Iran Raises "Red Banner of Retaliation" Over Mosque; Saudis on High Alert — dd4 2022-11-01 19:00
At least it ain't a rainbow flag.....
+5 # Saudis on high alert — Deepwoo 2022-11-01 18:46
Do y’all suppose just maybe the US is ramping up the threat level to try to curry some favor with their jilted ex ( Saudi Arabia) who is now working with Russia and has expressed interest in joking BRICS ?
+4 # RE: Iran Raises "Red Banner of Retaliation" Over Mosque; Saudis on High Alert — margofaith 2022-11-01 17:40
I believe this is about the civil unrest. Perhaps the government is warning the movement. I pray for the people if it is.
-11 # Fuck Iran — Jrhodes 2022-11-01 17:25
They attacked our base and injured American troops. Why is this countries leadership and infrastructure still around. Not that Saudi Arabia is a great country.
+6 # But — Silas8 2022-11-01 17:38
What are your troops doing uninvited in Irak?
+13 # Who knows... — Adiff5466 2022-11-01 20:10
I’ve come to realize our government is the worlds great bully and only “helps” when oil, gas or resources are involved. I had to come to grips in awakening to the fact I’d been lied to my whole life and while most people are good, the leaders are 99% bellicose devils.
-3 # RE: But — PowerPatriot 2022-11-01 17:44
Were is Irak?
+8 # Most of people in USA are not aware of this — Silas8 2022-11-01 18:44
I know you want to point out that I accidentally spelled Iraq in my native language.. however lots of people from USA do not know where Iraq are, let alone Ukraine.. or even Russia or China!
+1 # Big Correction. — Doug Brown 2022-11-02 17:33
The majority of readers on Hal's
site know geography. Listening to
Hal long enough, you learn.
Example:
When Hal references a location,
you'll look it up. You study the area and
probably the history surrounding
it.
The process of looking up places
accumulates, so after a while, you
acquire a mental library of world
Geographical locations.
That's on top of the geography you
already knew.
So Hal's readers are well versed in a lot of
subjects and some are in fact,
experts in their field.
+1 # Also. — Doug Brown 2022-11-02 17:46
Many of Hal's readers have acquired an
interest in geography through
Bible study.
The two go hand in hand.
Noah's travels.
Abraham's wanderings.
Moses wanderings.
David's land counquests.
Roman empire.
Reformation.
Martin Luther.
Christopher Columbus.
All involved a Geographical mind.
Folks may not have a Master's
Degree in geography, but that
doesn't mean they don't know
Geography.
Fact:
Part of being a follower of Jesus
involves constant learning.
+5 # I wouldn't be bragging — Getsum 2022-11-01 21:09
I spent a fair amount of time in your area of the world...there's a reason they're still wearing robes and living in mud huts. High Iqs and intellect are not the norm there. You have the elites and the rest are servants.
-1 # RE: I wouldn't be bragging — Woulf 2022-11-01 22:02
They always did seem to forget about "back blast". Some things are "priceless".
# RE: Iran Raises "Red Banner of Retaliation" Over Mosque; Saudis on High Alert — Lambs Servant 2022-11-01 17:25
Following.
+5 # Maybe USA needs this because it fcked everything else — Chappyusa1 2022-11-01 17:14
A war or attack from Iran could distract the libtards and all the morons in this country to take their eye off everything else. Since Biden fcked everything, why not fck this up too.
# Oh really... — Getsum 2022-11-01 19:34
I spent quite a bit of time in your area of the world. .I wouldn't be bragging too much about the intellect of that part of the world...there's a reason yhey still dress in robes and live in mud huts.
+5 # Just one problem with that — Silas8 2022-11-01 17:17
He gonna loose overseas..I think Hal is right, it's most likely Iran who need a distraction from the growing demonstrations at home
+9 # RE: Just one problem with that — Adiff5466 2022-11-01 20:13
Unfortunately wherever there’s an uprising or unrest in the world, the CIA isn’t too far behind.
+16 # lol...its becoming a fckn barroom brawl! — Dudimus Maximus 2022-11-01 17:10
...is there anyone out there, not fighting with someone else? ... it's like everyone is grabbing a fight date... dont wanna be a loser left out of the fray! Global Blazing Saddles! like the elite guards in a prison getting the gangs to fight each other for sport, betting on the outcome, afterwards gonna divvy up the spoils. "was Claus the guy on Laugh-In?: Und you vill be happy" they must be laughing- it's all too juvenile... the hedds of state all over the globe in funny uniforms and hats, making seriously silly speeches, waving the arms, and declaring war on whoever is available and willing to fight. too goddamn stupid... all of it... and we'ze stuck on this planet with them...
+2 # wars and rumors of war — bogwon 2022-11-01 19:29
it should be of no surprise to anyone that has a religious back round that turmoil is breaking out everywhere at this time.If you are confused as to whats happening take the time to visit the book of revelations in the bible. hopefully that will clear things up for you and motivate you to start preparing yourself and your families to stand for your judgement
+5 # Foolish — JohnnyinKY 2022-11-01 17:09
Isn’t it foolish to advertise that your going to attack if you actually plan on being successful?? Doesn’t make sense to me but what do I know. Seems more like a attention seeking thing to me.
+8 # The red flag never lies — Silas8 2022-11-01 17:06
An attack is coming, Iran never bluff with the red flag.. it will be regarded as a religious insult not to take action after the red flag is shown..
# Not what I mean — JohnnyinKY 2022-11-01 18:32
Quoting Silas8:

An attack is coming, Iran never bluff with the red flag.. it will be regarded as a religious insult not to take action after the red flag is shown..