Krakatoa Volcano Springs Back To Life 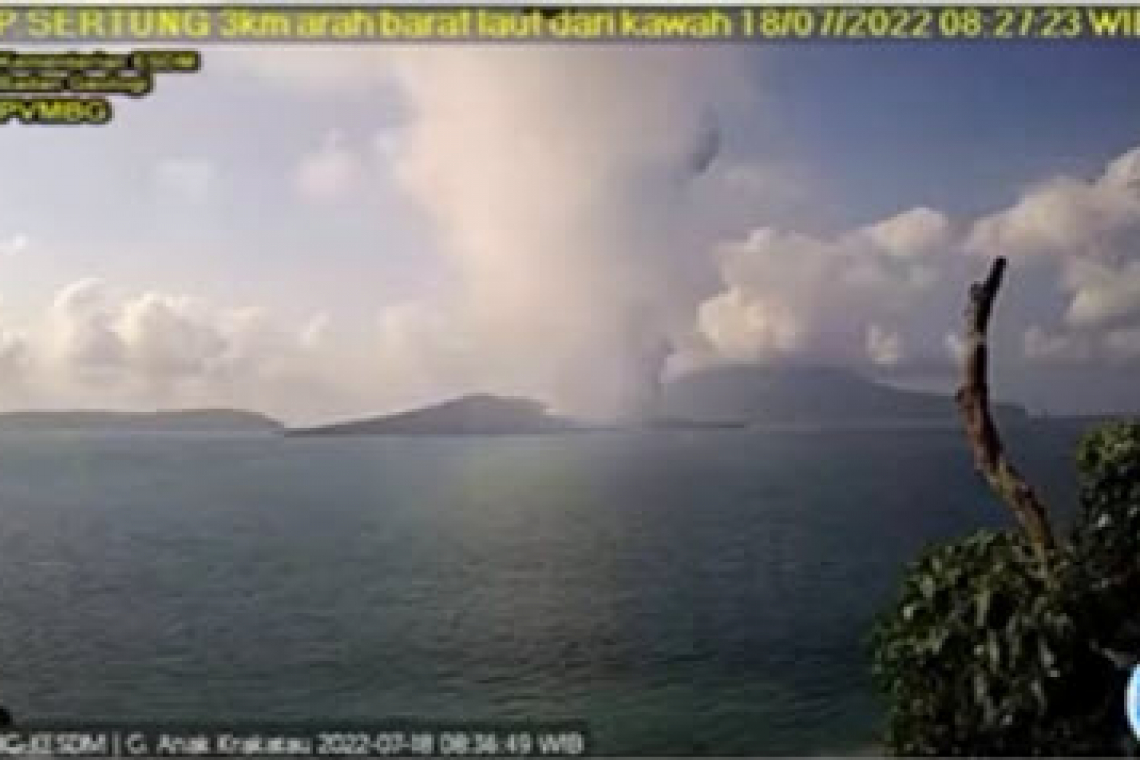 The volcano Anak Krakatoa has suddenly sprung back to life, with steam and smoke emissions coming from the crater.  This volcano is dangerous and it's history is frightening.

Krakatoa is the meanest volcano in recent history.

The last time this thing went off, it did so with a force of 200 megatons creating the loudest sound in recorded history

The radical climate extremists may like this, thought . . .  the last eruption reduced global temperatures by 0.6 degrees Celsius.

In 1927, a fourth island, Anak Krakatau, or "Child of Krakatoa", emerged from the caldera formed in 1883. There has been new eruptive activity since the late 20th century, with a large collapse causing a deadly tsunami in December 2018.

"Indonesian officials later revised the death toll to 426, with 24 reported missing and at least 7,202 injured in total.[2]"
-2 # All these volcanic eruptions, earthquakes and impending cosmic cataclysms are all biblical! — Haarnaś 2022-07-20 22:09
Those who are deniers that this is the Great Chastisement/Tribulation, read these two passages! Somehow, I have not seen it yet posted by protestants!

[12] Wherefore lift up the hands which hang down, and the feeble knees, [13] And make straight steps with your feet: that no one, halting, may go out of the way; but rather be healed. [14] Follow peace with all men, and holiness: without which no man shall see God. [15] Looking diligently, lest any man be wanting to the grace of God; lest any root of bitterness springing up do hinder, and by it many be defiled. [16] Lest there be any fornicator, or profane person, as Esau; who for one mess, sold his first birthright.

[17] For know ye that afterwards, when he desired to inherit the benediction, he was rejected; for he found no place of repentance, although with tears he had sought it. [18] For you are not come to a mountain that might be touched, and a burning fire, and a whirlwind, and darkness, and storm, [19] And the sound of a trumpet, and the voice of words, which they that heard excused themselves, that the word might not be spoken to them: [20] For they did not endure that which was said: And if so much as a beast shall touch the mount, it shall be stoned. [21] And so terrible was that which was seen, Moses said: I am frighted, and tremble.

[22] But you are come to mount Sion, and to the city of the living God, the heavenly Jerusalem, and to the company of many thousands of angels, [23] And to the church of the firstborn, who are written in the heavens, and to God the judge of all, and to the spirits of the just made perfect, [24] And to Jesus the mediator of the new testament, and to the sprinkling of blood which speaketh better than that of Abel. [25] See that you refuse him not that speaketh. For if they escaped not who refused him that spoke upon the earth, much more shall not we, that turn away from him that speaketh to us from heaven. [26] Whose voice then moved the earth; but now he promiseth, saying: Yet once more, and I will move not only the earth, but heaven also.

[27] And in that he saith, Yet once more, he signifieth the translation of the moveable things as made, that those things may remain which are immoveable. [28] Therefore receiving an immoveable kingdom, we have grace; whereby let us serve, pleasing God, with fear and reverence. [29] For our God is a consuming fire.

[1] For I would not have you ignorant, brethren, that our fathers were all under the cloud, and all passed through the sea. [2] And all in Moses were baptized, in the cloud, and in the sea: [3] And did all eat the same spiritual food, [4] And all drank the same spiritual drink; (and they drank of the spiritual rock that followed them, and the rock was Christ.) [5] But with most of them God was not well pleased: for they were overthrown in the desert.

[11] Now all these things happened to them in figure: and they are written for our correction, upon whom the ends of the world are come. [12] Wherefore he that thinketh himself to stand, let him take heed lest he fall. [13] Let no temptation take hold on you, but such as is human. And God is faithful, who will not suffer you to be tempted above that which you are able: but will make also with temptation issue, that you may be able to bear it. [14] Wherefore, my dearly beloved, fly from the service of idols. [15] I speak as to wise men: judge ye yourselves what I say.

[16] The chalice of benediction, which we bless, is it not the communion of the blood of Christ? And the bread, which we break, is it not the partaking of the body of the Lord? [17] For we, being many, are one bread, one body, all that partake of one bread. [18] Behold Israel according to the flesh: are not they, that eat of the sacrifices, partakers of the altar? [19] What then? Do I say, that what is offered in sacrifice to idols, is any thing? Or, that the idol is any thing?
1 Corinthians 10:1-19
-3 # "Big Eruption Coming" — t.n.kuss@hotmail.com 2022-07-20 19:26
The Earth is "CUMING" so "BLOW YOUR ROCKS OFF" and "LET RIP THE MAGNIFICENCE OF NATURE!"
-3 # Climate? — acturner067 2022-07-20 15:09
Must be climate change at work here? The world is on fire inside and coming to a head? Over in London many fires broke out in homes,etc. and the cause, hot weather, climate change (DEW, Smart Meters?)? Anyhow they are fooling the fishes of this world that their water tank has a serious leak in it and it's getting worse and they holds the patch that will fix it but you must give up your freedoms first by being fillet for dinner.
# RE: Krakatoa Volcano Springs Back To Life — RockyMountainBeerMan 2022-07-20 14:34
Quoting Woulf:

I think that was after 2016. You can still hear the grumblings even now. Just saying.

This is the last message of August 22, 1960 HVM said to Elena Aiello , an Italian Cloistered nun:

“Humanity has distanced itself from God and, hallucinated by earthly goods, has forgotten the sky and plunged into an overwhelming corruption, which is not even matched by the times of the flood! … But the hour of God’s justice is near and it will be terrible! Tremendous scourges overhang the world and different nations will be hit by epidemics, famines, strong earthquakes, terrifying hurricanes and death! … And if men do not recognize in these scourges the calls of Divine Mercy and return to God with a truly Christian life, another terrible war will come from East to West, and Russia with its secret weapons will fight America, overwhelm Europe and especially see Germany’s Rhine River full of corpses and blood. Italy will also be troubled by a great revolution and the Pope will have to suffer a lot. The enemy, like a roaring lion, will advance on Rome and her gall will poison peoples and nations ”.
+3 # Loudest sound — Woulf 2022-07-20 10:13
I think that was after 2016. You can still hear the grumblings even now. Just saying.
-1 # Mini Ice Age — clayht 2022-07-20 09:46
Did the mini Ice age of 1915 contribute to the flue epidemic of 1918?
# Did the mini Ice age of 1915 contribute to the flue epidemic of 1918? — Snug 2022-07-21 07:13
Good point. Nutrition and poor lifestyle is the cause of flues and 'so called' epidemics, not viruses. Poor growing seasons over 2 or 3 seasons would have led to poor nutrition and therefore an apparent epidemic.

All vaccinations are toxic and can only lead in one direction to poor health not good health.

No virus has ever been isolated. Covid-19 was never isolated, the Chinese also said they never isolated it. No one in the West have stated that they have isolated it, yet the Covid-19 DNA sequence was apparently electronically sent to the West from which the mRNA 'vaccine' was created. Collusion by Western companies / personal in Wuhan collaborated.

The toxin is the vaccine, not a mythical virus.

Death rate equal to the seasonal flue or even less.

The greatest risk factor that cuts across all age groups (including 75years +) and all comorbidity (including obesity) is low levels of vitamin D.

So stay inside, get boosted with more bio weapon DNA altering toxins, don't go to the beach, stay out of public spaces, lock yourself up inside, stay away from the sun, wear a bacterial laden sick rag in front of your lungs, get sick and die. For Satan's sake, just get sick and die already.
+1 # Flu — Kad2866 2022-07-20 11:35
I read that Rockerfeller was testing vaccines on American service men with first case on base in Ksnsas. Troops then sent worldwide spreading the Rockerfeller flu. Think they now think it was bacterial. Rockerfeller was using horses to try to develop vaccines.
+7 # Mini Iceage — mikewil1 2022-07-20 09:30
The last time this volcano went-off it caused a mini iceage in 1815 and was called the year without a summer.
# RE: Mini Iceage — RockyMountainBeerMan 2022-07-20 14:31
That was Mount Tambora, a super duper volcano: