A Magnitude 4.2 earthquake has struck in the Canary Islands and concerns have been raised that if the Cumbre Vieja volcano erupts or otherwise shakes loose, a massive slab of rock could smash into the Atlantic Ocean causing a killer tidal wave along the entire U.S. east coast about 8 hours later.

The earthquake, from the Spanish archipelago’s most active volcano, which is located on the island of La Palma, have sparked panic across the Canary Islands, with volcano experts pulled in to examine the unusual seismic activity.

The main earthquake registered in stations of all the islands of the Archipelago and was widely felt by the population in the islands of Tenerife and Gran Canaria.

According to the information received so far, the earthquake has reached a maximum intensity of III (EMS) in different areas of the northwest island of Gran Canaria and the northeast of Tenerife. Updated information on how this earthquake has been felt can be found here.

The maximum magnitude of earthquakes in this area is 5.2 for an earthquake that occurred on May 9, 1989. It is one of the most active areas of the Canary archipelago.

A previous warning from Dr. Steven Ward, of the University of California, and Dr. Simon Day, of the Benfield Greig Hazard Research Centre at University College London is now being widely discussed:

They found that if the Cumbre Vieja – an active but dormant volcano – were to erupt, -- or if an nearby earthquake shook things loose --the western flank of the mountain could tumble into the sea. 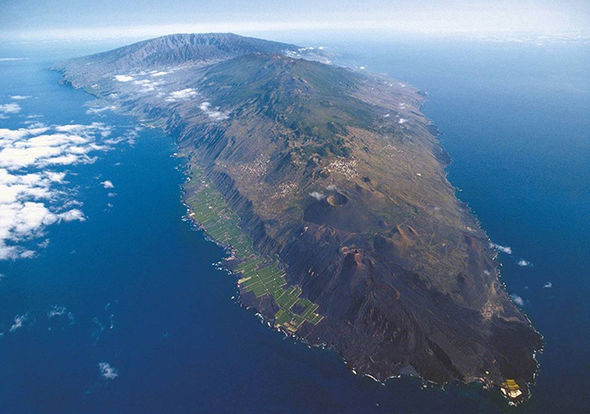 Writing in Geophysical Research Letters, they said a build-up of groundwater could destabilize a block of rock up to 500 cubic km in size, which could break off, smashing into the sea at up to 350 km an hour (220 mph).

This landslide will unleash a deadly wall of water, initially almost 3,000 ft. high and several miles wide, hurting towards the US east coast at speeds of up to 800 km an hour (500 mph).

About 8 hours later, waves of about 130-160 feet high would begin smashing into the US east coast, traveling up to TWELVE MILES inland.

Since January 1, 2019 the IGN has located a seismic series of 60 small earthquakes in the area of ​​Vilaflor in Tenerife at a depth of between 3 and 10 km and magnitudes (mbLg) of between 0.1 and 1.3. None of the events has been felt by the population due to its low magnitude.

In the last 3 months, 170 earthquakes have been located in the zone at an average depth of 7-8 km and of low magnitude being the highest of 2.4.

However, only 6 of these earthquakes exceed the magnitude 1.5

WARNING BUOY OUT OF SERVICE

In the Atlantic, there are Tsunami warning buoys as shown on the image below:

Notice the Tsunami Warning Buoy off the west coast of Africa aligned with the US east coast is colored red . . . . it's OUT OF SERVICE

The National Data Buoy Center admits: "As of 13:00Z, 04/22/2016, the buoy located at station 44401 has ceased transmitting. Data will be restored during our next service visit to this location."   That's almost THREE YEARS the buoy has been dead!

The next nearest Tsunami Warning buoy is located off the southern coast of Long Island.   Given the speed of a Tsunami, that Buoy would only provide about 20 minutes warning that a deadly wave was approaching the coast.

How to do warn the millions of Americans in New York City, and elsewhere on the east coast, to move to higher ground with only twenty minutes warning?

It is also interesting to note that, despite Seismographs all over the world, the US Geological Survey (USGS) is NOT reporting this earthquake.  Why?

NOTE: No other media outlet in the USA (or Europe as far as I can tell) is covering this story.  No other media outlet is reporting that a crucial Tsunami Warning Buoy is offline for almost three years. NO ONE ELSE IS COVERING THIS!  If you think this type of cutting-edge reporting is worth having, PLEASE support it with a subscription for $1 a week, billed Quarterly ($13) HERE.   If that's too big a bite for your budget, there's a $5 a month option HERE.   We accept ALL CREDIT CARDS from ALL COUNTRIES via "Stripe" on the sign-up page.   You can also use Paypal if you like.  For those who do not use Online financial transactions, you can still sign-up by selecting OFFLINE PAYMENT and mailing cash, check, or money order to the address provided.  Only with YOUR support can this site continue its work.  Please help.