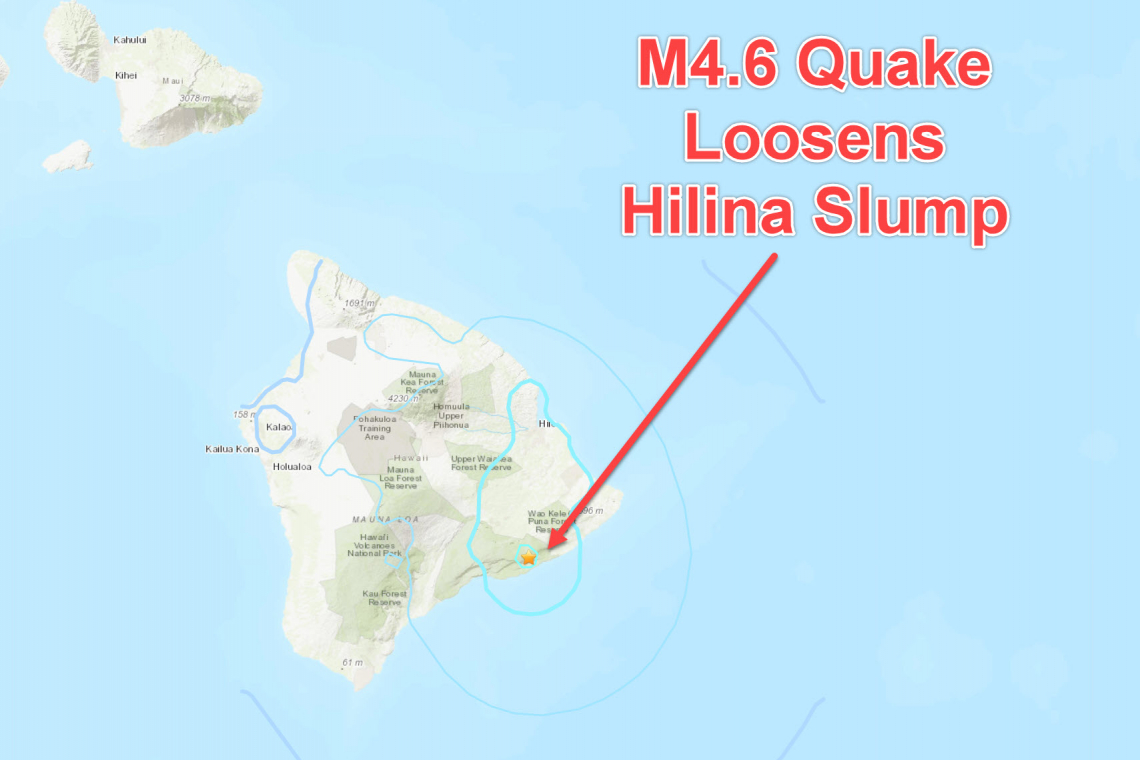 At 5:20 AM eastern US time today (Friday), the big island of Hawaii experienced a Magnitude 4.6 Earthquake, DIRECTLY next to the ominous "Hilina Slump."   The quake took place at a very shallow depth of only 6km, and Geologists in Hawaii are already frantically reporting "very large new cracks in the Hilina Slump."

For those who may not be aware, the Hilina Slump is a very dangerous parcel of land.

The Hilina Slump, on the south flank of the Kīlauea Volcano on the southeast coast of the Big Island of Hawaii, is the most notable of several landslide areas that ring each of the Hawaiian Islands. These landslides are the means by which material deposited at a volcano's vents are transferred downward and seaward, eventually spilling onto the seabed to broaden the island.

Kīlauea's entire south flank, extending out to Cape Kumukahi, is currently sliding seaward, with some parts of the central portion (over looking the Hilina slump) moving as much as 10 centimeters (4 inches) per year, pushed by the forceful injection of magma and pulled by gravity.

Current movement of the Hilina slump and recent volcanic activity, coupled with evidence of massive submarine slides in the geological past, has led to sensationalistic claims of megatsunamis that might result if the south flank of Kīlauea should suddenly fail. Geologists have been confident no such failure was likely, and other experts have stated that the supposed threats of megatsunamis are exaggerated.

Yet after this morning's M4.6 earthquake, many of those same Geologists are now almost frantic in their reporting; saying very large cracks have developed around the slump and that cracking sounds can be heard coming up from deep in the ground, as if significant movement is taking place!

According to the US Geological Survey (USGS), the quake took place slightly east of the Hilina Slump, at the worst possible location for a quake; near the ocean.  This has the effect of loosening and destabilizing the base of the slump, making it more likely to slide into the ocean.

Would the collapse of a flank of a Hawaiian volcano result in "towering waves crash[ing] with the force of countless atomic bombs onto the coastlines of North America and eastern Asia"?

Public awareness of, and anxiety about, so-called "megatsunamis" was heightened in 2001 when a respected scientific journal published an article by Steven Ward and Simon Day claiming that

1) the Cumbre Vieja volcano in the Canary Islands "may experience a catastrophic failure of its west flank" that would drop a large volume (perhaps 500 cubic kilometers) of rock into the ocean, and;

2) the resulting tsunami would hit the African coast with waves as high as 100 meters (330 feet), while Florida could expect to see 25 meter (80 foot) high waves. Although no time frame was given, certain "ominous" developments were described that implied "any time now".

Coupled with the knowledge that the Hawaiian islands are ringed with debris fans where large portions of the various volcanoes have slid into the sea – the volume of the Hilina slump has been estimated at 10,000–12,000 cubic kilometers – it seems reasonable to consider the risk of volcanic and/or seismic activity in Hawaii wreaking havoc around the Pacific Rim. In the word of a report prepared by the U.S. Geological Survey for the U.S. Nuclear Regulatory Commission the threat of megatsunamis is: "exaggerated."

Lost in much of the popular reporting was that 25 meter waves hitting Florida was only in the worst-case scenario, and that with "more modest assumptions" the calculated height was only 3 to 8 meters. At almost the same time a physical modeling study at the Swiss Federal Institute of Technology, though not mentioning Ward and Day, examined the same worst-case scenario, and predicted that "the maximum wave amplitude off the U.S. east coast would be less than one meter."

An analysis by Pararas-Carayannis (2002) found methodological errors in Ward and Day's modeling, including unrealistic assumptions regarding source dimensions, slope instability, speed of failure, and the means by which a slope failure generates a tsunami. That study also pointed out that:

Caldera collapses and large slope failures associated with volcanic explosions of Krakatau in 1883 and of Santorin in 1490 B.C., generated catastrophic local tsunamis, but no waves of significance at distant locations.

Pararas-Carayannis concluded that neither geology nor historic events indicate that Kīlauea's southern flank is "unusually unstable or that a massive collapse is possible in the foreseeable future", but even if such a collapse happened as postulated the far-field effects of the resultant tsunami "have been greatly overstated".

That said, here is a scientific model showing the likely result for California, Mexico, and South America if the Hilina Slump actually tears-off from the island and slides into the ocean: