Marines Killed in Kabul Airport Explosions Were Killed by U.S.-Made C4 and SEMTEX Left Behind by US Forces During Withdrawal 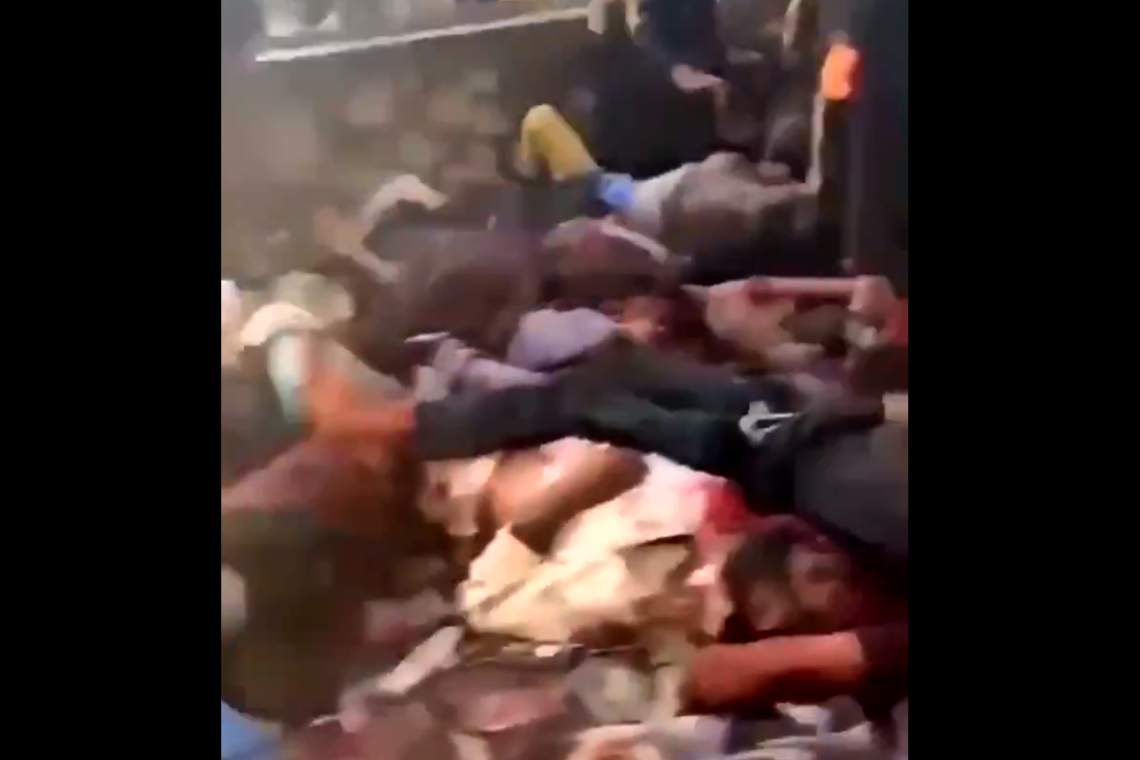 The bloody and deadly carnage at five bomb blast sites outside Kabul, Afghanistan Airport is made all the worse as details emerge showing the explosives used were the ones left behind by US forces as they withdrew from parts of Afghanistan.  Our troops were killed with our own explosives.

My comment to her would be direct: "Listen up, crap for brains, you're talking about a hostage situation". These "neo-Bolsheviks" are so dense it is incredible how stupid they all are. It will be like 1979 in Iran but much worse. The MSM will try to ignore it like they did with the people in South Vietnam. No picture on the telly of the slaughter? Maybe not this time with all those cell phone cameras.
Time will tell.

Meanwhile a group of ex-special forces put their lives on the line to get out their comrades in arms in Afghanistan:

According to POLITICO, U.S. officials gave over a list of names of U.S. citizens, green card holders and Afghan allies so that the Taliban would grant those people entry into the airport’s outer perimeter.

Lawmakers and military officials are rightly outraged over the fact that the identities of these people were handed over to the Taliban, who is known to be going door to door to find both Americans or anyone who aided the U.S. military during the war in Afghanistan. Taken from Defcon Level Warning
# Yes, Biden said they "may" have given a list — Man of the Atom 2021-08-28 00:22
A kill list - Congresswoman Greene is on top of this one as usual. May God and patriots protect her.
+2 # China — Doug Brown 2021-08-27 11:48
China has Joe by the balls, pictures and video of Hunter raping Chinese Children, unseen financials portraying Joe as the monster he is, China owns Joe but no one can say a word.
Joe like Hillary is the property of China. We cannot touch these people.
+1 # There's something definitely going on here — Man of the Atom 2021-08-28 00:25
The Chinese scientist who defected from the lab was handled by D_I_A as it is feared the C_I_A and F_B_I haven been compromised.
+4 # RE: Marines Killed in Kabul Airport Explosions Were Killed by U.S.-Made C4 and SEMTEX Left Behind by US Forces During Withdrawal — JFY 2021-08-27 09:27
.
This was, at the very least, allowed to happen, if not instigated or even perpetrated by the intelligence agencies outright to increase the hate towards the usurper in thief so that no one will oppose both his removal and the installment of "Legs in the Air Harris", for as long as she lasts.

It will be determined almost immediately that she can't be the new usurper in thief because her parents weren't American and the job will fall to pelosi, who will pick killary as her veep.

Then pelosi will either step down or be removed and killary will be usurper in thief for life.

Of all the things that were "left behind", the explosives would have been the easiest thing to dispose of immediately. They were left behind for a purpose. This was the first of probably a long series of false flag attacks perpetrated initially in Afghanistan but soon in a town near you, and all the blame will fall on the usurper in thief joe bribin'.

Things are going to get a LOT worse from now on.
+6 # Look to High Places? — acturner067 2021-08-27 08:33
Those people of the so called Taliban are not just Afghanistan people but a comprise of mercenaries (it's illegal but that does not stop the wicked)? If one would do a deep dive into history you will find war is a racket (War is a Racket by Smedley D. Butler). If one looks deep into Hitler's Blitzkrieg Trucks you may discover they were produced by Ford and GM (GM and Ford wants you to believe it is not so) and they also produce equipment for the enemy in many other wars that we fought. There a lot more that can be said here on this subject but space is limited. Those at the very top of the totem pole are the one's that create our chaos, until we recognize this we will continue to run around in circles like a chicken that just lost it head. For we do not wrestle against flesh and blood, but against principalities, against powers, against the rulers of the darkness of this age, against spiritual hosts of wickedness in the heavenly places. Ephesians 6:12
+8 # Deliberately accomplished — deltaoscare4 2021-08-27 08:10
I was n Iraq in 2003, USMC, and from the amount of gear that was just sitting there, stored and left, versus the amount of personnel in country, that doesn't add up.
Way too much gear for the mission statement and amount of personnel. They abandoned people and gear on purpose.
+3 # ? — Ebwallace1998 2021-08-27 07:30
This is beyond crazy. The world is literally going to implode…as we all knew it would. Check this out, gonna see what comes of theirs as the Titanic sinks.

The fed is bankrupt and is corrupt, hyperinflation is on the way to make the dollar worthless. Crypto is the money of the future. I saw pi network a month ago and it looks like it will be a huge thing when it exits beta next year and is listed on the coin exchanges. The coin is being built by Stanford professors and they hope to make it a worldwide payment system for goods and services. If you want to get in on this you can download 'pi network' from the app store. Install it with the invite code 'kackiegiant'

Simply check in every day and they give you coins, until Christmas. There is no charge and no risk. There are now more then 23 million engaged Pi users. Get in now before its too late. and join the in app chat room. Please note that if you have taken the clot shots, please leave your password where it can be found after your coming death. No need to have your unvaxed family upset they cant get the crypto.
+1 # US handed over ISIS terrorists — Seemorerocks 2021-08-27 04:14
https://www.tehrantimes.com/news/430353/U-S-has-transferred-ISIS-terrorists-to-Afghanistan-Larijani
+3 # Although — BushDid911 2021-08-27 02:44
Although this is horrible .
It is the price of surrender .
But look back try to find in the press how many children's parties , weddings or nurseries the British and Americans have bombed since the occupation ?
How many women and children WE have slaughtered In Afghanistan ?
It does not justify what happened yesterday .
The bombings are unjustifiable .
But look at the outrage in our press compare it to the coverage from the times we flattened a school full of children or shattered a wedding into a million cubes of meat .
We had NO business being there .
I have friends that lost arms and legs ..for what ? Why ?
Get out ,stay out
I couldn't give a crap who runs Afghanistan or any other shit hole country . leave them to it .
# All of them should resign in shame! — Man of the Atom 2021-08-27 02:36
This thing is going from very bad to even worse. If this becomes public knowledge, there will be an impeachment vote even in the corrupt House.
+2 # Shame — judith L 2021-08-27 11:14
Way beyond resignation or impeachment. This is blatant treason. Crime against humanity.
+11 # RE: Marines Killed in Kabul Airport Explosions Were Killed by U.S.-Made C4 and SEMTEX Left Behind by US Forces During Withdrawal — TB1 2021-08-26 23:47
This is not done by accident!
+1 # Did — BushDid911 2021-08-27 02:46
Did you think anyone here believe these nuttjobs blew themselves up by accident ?
Of course it was on purpose it's very hard to accidentally explode !!
+5 # The New Puppet — dz parklender 2021-08-26 23:42
Like clock-work, same puppet-masters, new puppet in the White Wash House.
Take note of the CFR names on one image in this video,, 3 of five are directly involvedin in BidEn's clown show..
And why did the CIA go there recently? Should that have been a State Department role?

The Power Behind the Presidency G.W. Bush Pre 9/11
The CFR through the decades.
https://thenewamerican.com/the-power-behind-the-presidency/
From The New American
by William F. Jasper
Aug. 12, 2001