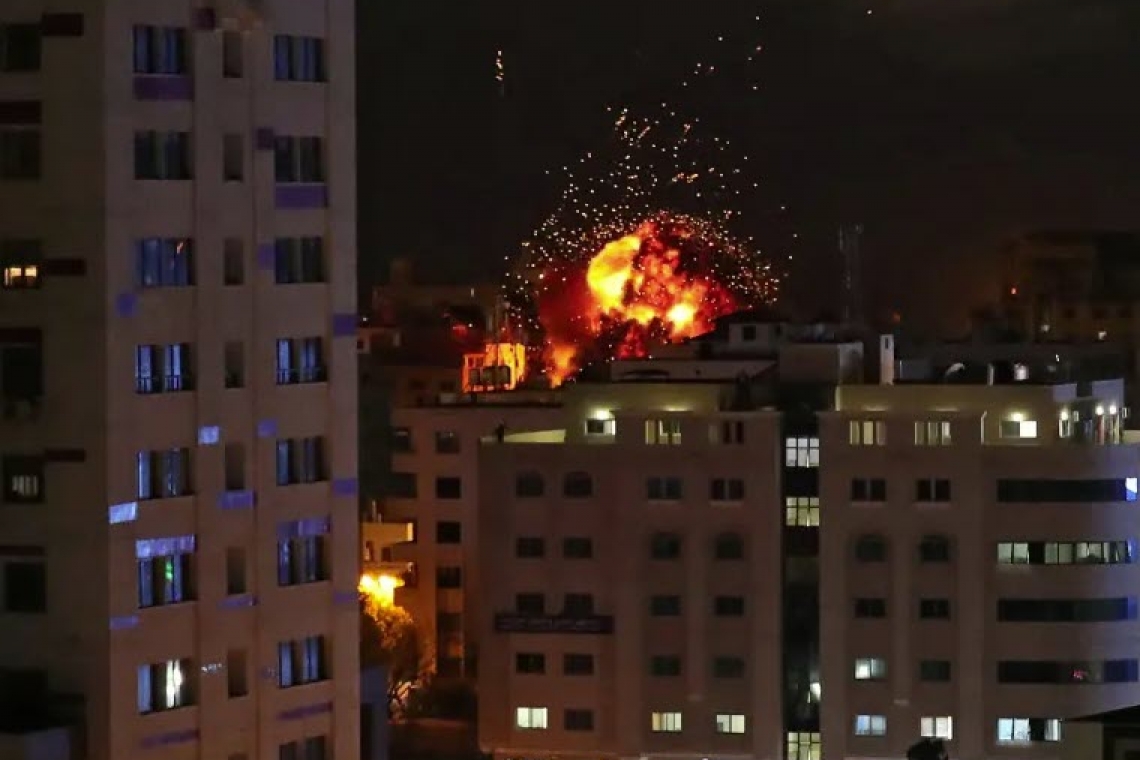 AL-QUDS BRIGADE CONFIRMS THE DEATH OF LEADER BAHAA ABU AL-ATTA DUE TO AN ISRAEL AIRSTRIKE EAST OF SHIJAIA NEIGHBORHOOD IN GAZA!

Smoke was seen rising from the scene and ambulances quickly headed to the scene, according to Quds.

The explosions occurred as IAF planes were flying in the area, but the reasons for the explosion are still unknown.

The head of Palestinian Islamic Jihad’s (PIJ) Al-Quds Brigades in Gaza, Baha Abu al-Ata is considered one of the top terrorists in the blockaded coastal enclave.

While Hamas is the ruling party in the Gaza Strip, the group has in recent years been losing control over the street; and the vacuum was being filled by Ata, Tehran’s main man in Gaza.

This targeted assassination is a major escalation: Israel assassinated Baha' Abu al-'Ata, the commander of the Palestinian Islamic Jihad's northern sector in Gaza. He pushed for more aggressive action toward Israel. All schools will be closed in southern Israel expecting retaliation.

Elements inside Gaza are launching immediate retaliation against Israel over the death of Palestinian Islamic Jihad leader.  Rockets are being launched into Israel from Gaza.

IDF statement: We carried out a precise operation that killed a senior PIJ official. We are preparing for days of war and rockets, even in the center of the country.

All government offices in Gaza have been evac'ed

Hamas controlled interior ministry in Gaza had announced a state of emergency throughout the strip , all governmental and education institutions will remain closed till further notice due to the “Israeli aggression”

Hamas: "We mourn the martyr leader Bahaa Abu al-Atta, who was targeted by the hand of Zionist treachery at dawn, and the assassination will not go unpunished, we affirm that the Zionist enemy bears all the consequences of this escalation and targeting."

PRC : “THE GATES OF HELL WERE OPENED. ISRAEL WILL BEAR THE CONSEQUENCES “

Israeli Security Cabinet will convene at 9 AM

Qassam and the Popular Resistance Committees, the most powerful factions, join the Jihad in calling for revenge.

Akram Ajuri a senior Islamic Jihad member was killed in a separate strike by Israel in Damascus, Syria.

PIJ confirms targeted assassination of Akram Ajouri in Israeli strike in Syria. His son also died with him.

Al-Quds Brigades: we have targeted Sderot, Ashdod, Hadera and Jerusalem.

Incoming rocket sirens are blaring throughout the Tel Aviv metropolitan area. If you’re in the area, TAKE COVER IMMEDIATELY.

Hamas & the PIJ are expected to continue the rocket fire & to actually increase rocket fire against Israel.
Also Tel Aviv Municipality has cancelled all educational activities and opened all bomb shelters.

All schools and workplaces are closed in Tel Aviv, as well as others cities in central and Southern Israel due to escalation in Gaza

Tel Aviv stations being shut down. Palestinian Resistance targeting Tel Aviv from Gaza. Everything at a standstill from Gaza border to Tel Aviv. I don't think the Israelis thought Tel Aviv would be targeted. Sending the settlers in a panic.

IDF confirms 50 rockets fired at Israel from Gaza, 20 intercepted by the Iron Dome missile defence system. For the first time since 2014 schools and businesses shut in Tel Aviv because of the attacks. This is the biggest escalation since May 2019 when 100s of rockets were fired.

An Israeli ground offensive into GAZA has been scheduled for later tonight. . .