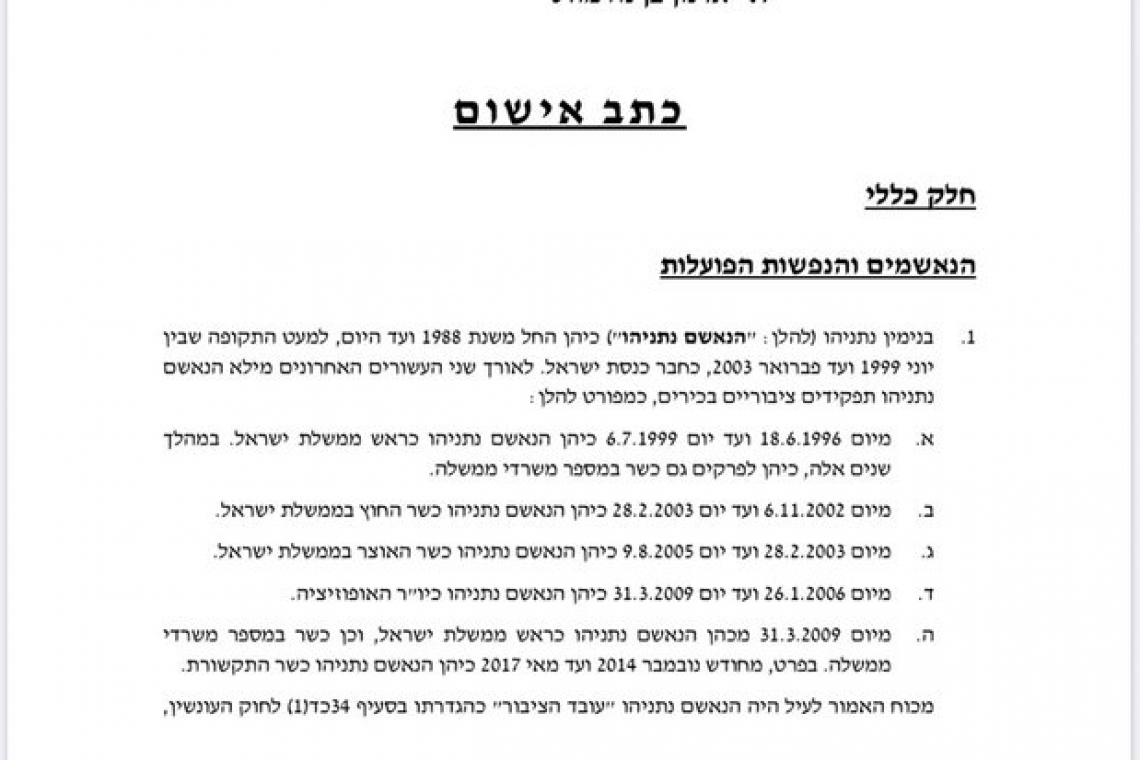 Attorney-General Avichai Mandelblit announced his final indictment on Thursday against Prime Minister Benjamin Netanyahu, making him the first prime minister in Israeli history to be indicted while still in office.

The indictment decision could alter the course of negotiations over forming a new government and who will be the new prime minister in the current 21 days Knesset process on the issue.

Mandelblit will now ask the Knesset to waive Netanyahu's immunity, a process which can take 30 days.

Often indicted MKs waive their immunity sooner, but Netanyahu has been trying to delay any impact on his power from the indictment process and may try to draw out the process longer.

The biggest moving pieces had been what the charge would be in Case 4000 and whether Case 2000 would remain a breach of trust charge as in Mandelblit's initial February announcement, or whether it would be closed.

Ultimately, the decision to indict Netanyahu for bribery is the most decisive one.

It means that his trial will be in a district court, known for being tougher than magistrate's courts and that he could face a potential jail sentence of years instead of months or mere community service.

Moreover, it means that any petition to the High Court of Justice - which will doubtless soon be filed - to remove him from power, has a much better chance.

As early as 2017-2018, there were multiple indications that an indictment for bribery could bring down Netanyahu even if he did not voluntarily step down, and that this serious consequence was part of what was making the investigatory process take longer.

However, the decision to keep Case 2000 as an indictment for breach of public trust, despite this being the case which Mandelblit was never a fan of, was also significant.

In Case 4000, Netanyahu is accused of involvement in a media bribery scheme in which Walla! owner Shaul Elovitch gave him positive coverage in exchange for Netanyahu making government policies favor Elovitch's Bezeq company to the tune of around NIS 1.8 billion.

In Case 1000, Netanyahu is accused of receiving hundreds of thousands of shekels in gifts from rich tycoons, mostly from Arnon Milchin, in exchange for a variety of help with business and personal-legal initiatives. The charge itself is for acting in situations in which Netantahu had a conflict of interest, since no actual quid pro quo could be proven.

In Case 2000, Netanyahu was accused of working with Yediot and Yisrael Hayom to reduce Yisrael Hayom's competition with Yediot in exchange for positive coverage for Netanyahu in Yediot. The deal never went through, but the law has crimes of attempted bribery and breach of trust which can apply even if a deal does not go through.