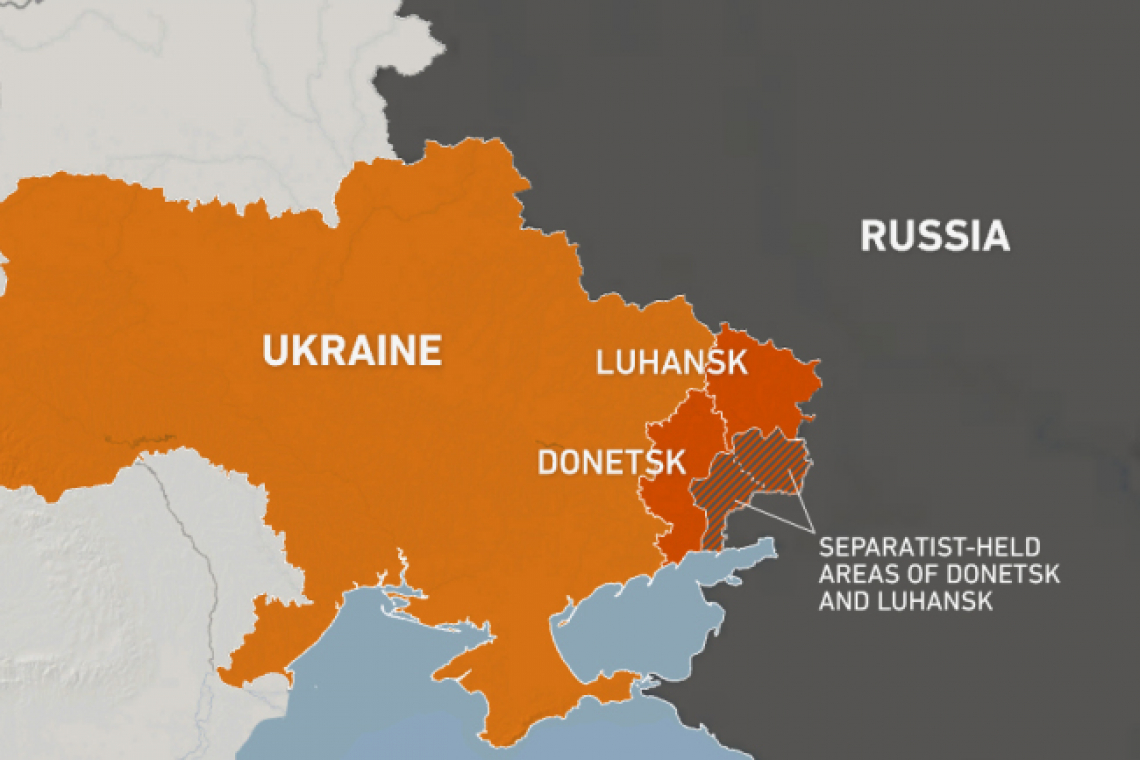 United States Strategic Command (USSTRATCOM) has issued a Posture Review pointing out that an adversary may choose to use NUCLEAR WEAPONS first rather than wait until they are losing a war.

Their precise language "Posture Statement Preview: The spectrum of conflict today is neither linear nor predictable. We must account for the possibility of conflict leading to conditions which could very rapidly drive an adversary to consider nuclear use as their least bad option."

#USSTRATCOM Posture Statement Preview: The spectrum of conflict today is neither linear nor predictable. We must account for the possibility of conflict leading to conditions which could very rapidly drive an adversary to consider nuclear use as their least bad option. pic.twitter.com/4Oe7xkl05L

When USSTRATCOM puts out something like they just put out, its time to be paying attention.

For reader help, I have added a map showing the likely targets of a massive nuclear attack upon the United States.   If you are in or near any of these places, you need to have plans to evacuate to somewhere else.  The target map, below, can be clicked TWICE to expand it fully (this article continues at length, beneath the map): 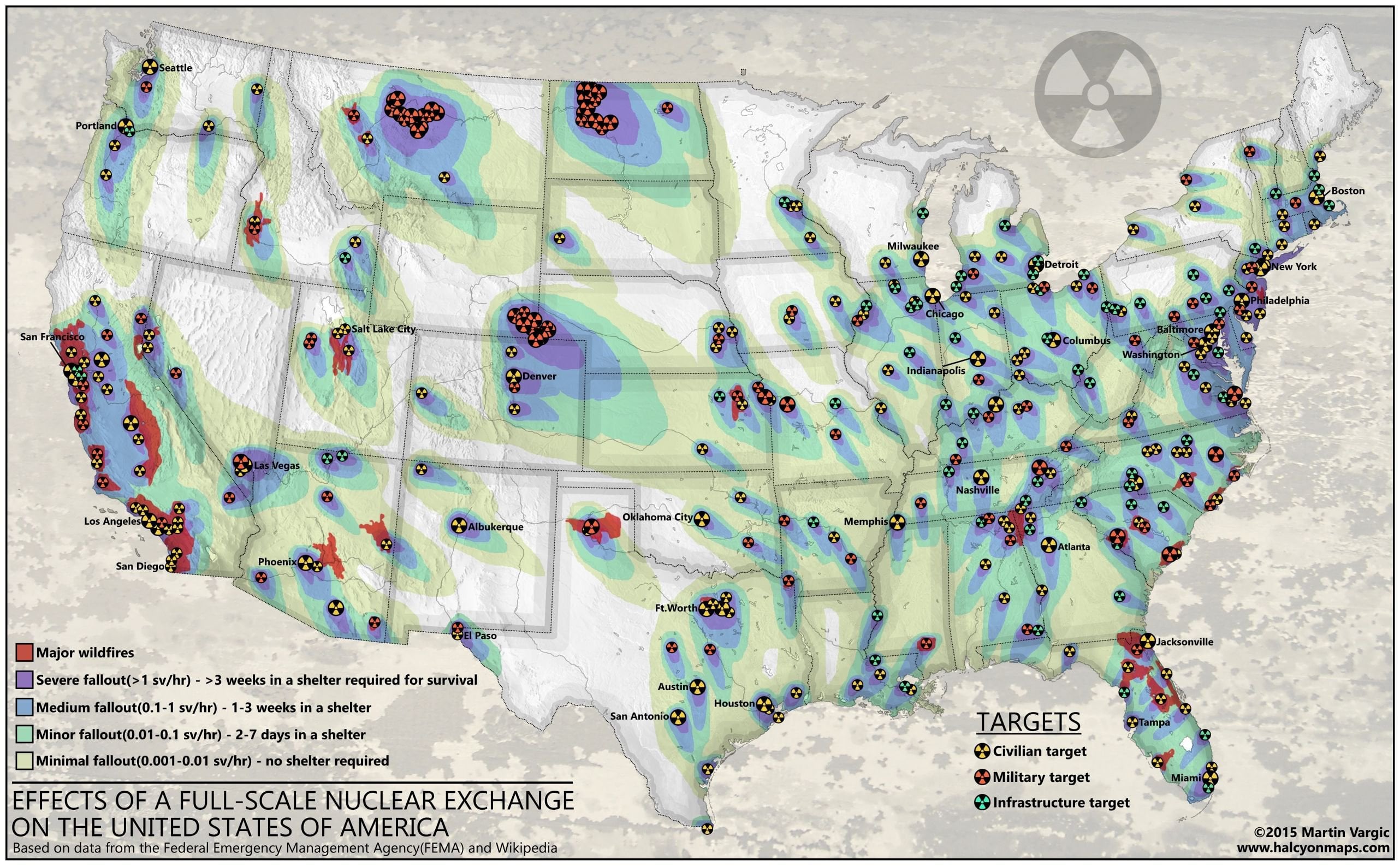 In the eyes of NATO, any enemy (including Russia) have no chance of winning a war.

It's just how they see it.

Now, an enemy that is forced to fight NATO, or is willing to attack NATO unprovoked (reasons are irrelevant to the discussion) have a number of options, ranging from good to bad.

But the "good" or the "bad" is subjective, and depends on who is defining what is "good" and "bad."

For instance, in this case, if Russia launches a surprise massive nuclear attack against U.S. silos, in order to destroy as many nukes as they can, from the point of view of Russia, this is a "good" option, militarily speaking.

The U.S. Strategic Command assumes that Russia will not use nukes in the initial phase of the war, but rather AFTER the war starts, and Russia is losing.

This is the military doctrine of NATO, which assumes (totally wrong) that a nuclear war will start AFTER a conventional war that leads to conditions (read : losing) for one side to use nuclear strikes as a hail Mary.

So, in a sense, if Russia and Ukraine start a war, NATO gets involved (U.S. being the main actor), Russia will not be able to conventionally compete against NATO forces, so Russia might choose to use nukes.

Of course, the US whines and moans "If only Russia will play how U.S. Strategic Command wants..."   Russia already KNOWS that if NATO gets involved with the Ukraine situation, they will lose a conventional war.

To assume that Russia will get bogged down in a war against a much superior force, and simply lose troops and assets UNTIL it's clear that it is losing...THEN using nukes, is the epitome of stupidity.

The moment NATO gets involved in a serious manner (starts mobilizing tens of thousand of troops, hundreds of planes, dozens of ships, etc. etc.), Russia will NOT WAIT until those forces attack, see if they lose, and THEN use nukes.

Russia will use nukes the moment the U.S. and NATO start mobilizing a number of forces and assets that will crush Russia.

U.S. Strategic Command seems unable to understand that Russia will use nukes BEFORE a Russia-NATO war even starts.

Or maybe they do understand, and what they say to us, the plebes, is to make us believe that they don't.

A few days ago, Russia expelled ten American Diplomatic Personnel and "suggested" that Ambassador John Sullivan leave to, for "consultations" with the US Government.

The ten Diplomats departed Russia, but Sullivan LAST NIGHT issued a public statement saying he REFUSES to leave Russia despite their "suggestion."  It was publicly reported this way by AXIOS:

New: The U.S. ambassador to Russia is refusing to leave after the Kremlin "advised" him to return home following new Biden administration sanctions, two sources briefed on the situation tell Axios. https://t.co/8ChnslHbS6

Here we are, eight hours later, the Associated Press is reporting "US Ambassador John Sullivan is returning to the US for consultations . . . but vows to return in a couple weeks.

Russia just showed him what's what.

As of this morning, Ukraine has 110,000 troops massed on the borders of Luhansk, Donetsk (Collectively "The Donbas").  Russia has its 2nd and 3rd Armies massed on the other side of Luhansk and Donetsk, and partly inside Crimea.  In addition, Ukraine has about 450 tanks, about 800 pieces of artillery also massed.

The US and NATO have about 40,000 troops in theater, but in countries nearby Ukraine, NOT in Ukraine itself.  The US began shipping tanks, APC's, fighter jets and ammunition last week.  That US build-up continues to this minute.

The really funny thing is that Russia didn't start moving ANY TROOPS into the area until Ukraine passed what's ostensibly a written declaration of war, AND moved 98,000 troops up to the Donbass and Crimea regions.

The most they had done up to that point was deliver several tons of fuel and ammunition to the local defense forces in Luhanks and Donetsk so that they could at least fight back if Ukraine tried something.

What's not being reported in any media except here, and not being mentioned by __any__ political representatives anywhere, is that Ukraine itself moved up a substantial percentage of it's entire army and called up reservists which is what started this whole massing-of-troops.

The 150k or so Russian troops scattered around the region are barely numerically superior to what Ukraine has moved to the front lines.

We're seeing more news about additional units the Ukrainians are moving up, but for the most part the people in power have done a phenomenal job of keeping people from realizing that Ukraine is very much the aggressor and what we're seeing from the Russians up until very recently is just the bare minimum you'd want to defensively respond with.

The Russians outright can not afford to lose Crimea, the Kerch strait bridge, their naval port, or the Nord Stream 2 pipeline between Russia and Germany.  These things represent untold tens if not hundreds of billions of dollars of Russian capital outlay.

Russia is, in a very real way, protecting their investments, to say nothing of the ethnic Russians who Ukraine wants to genocide!

Should Russia lose the Crimea, it's naval base, the bridge, and the Nord Stream 2 pipeline, it would be an economic shock severe enough to unwind the entire Russian economy at this point.

This isn't about national pride or imperialism for the Russians, it's quite literally a fight for national survival.

As someone who has watched this conflict since it's beginning during the Euromaidan stuff, I have gained a respect for Russian President Putin and the key players like General Shogui and Foreign Minister Lavrov who have shown restraint, humanitarian concern, and wisdom in their handling of this entire crisis.

The reality of what they have done and said so far is in extremely stark contrast to how they are portrayed in western media to a point that makes me feel quite sick.

It's uncomfortable knowing that my nation is on the wrong side of all this, and that if my nation's leaders get their way MILLIONS WILL SUFFER.

It's sobering to realize that things have gone this far astray.

I sincerely hope that President Putin is even one tenth the leader I believe him to be because in a very real way his handling if this situation represents the only hope for millions not to be plunged into unending death and misery.

Of course, NATO conventional superiority is well documented, and many, many people rely on that assessment to think Russia would automatically lose any conventional war.

I, however, cannot escape the reality that the NATO and the US Military have been transgender fortified with LGBTQ+ and Social Justice Warriors (SJW) to go "where no man has gone before. "

The US has never had such a fierce rainbow fighting force; so Russia should back the fuck down or face Drag Queen hour in their libraries for their children.

OH, and during the fight, every time an LGBTQ+ or SJW is injured or killed, the US can complain to the UN for discrimination and the UN will impose penalties on the enemy (usual stuff, sanctions, etc.)

Russia knows these things and rightfully has begun MOCKING us.   Margarita Simonyan, the head of Russian Television went so far as to say

" . . . the West’s behavior on sanctions - led by America “like some kind of a raging Santa Claus on antidepressants or opiates” - acted as an incitement to the Kremlin to gain full control of the Russian-speaking Donbass in eastern Ukraine."

They view us as a raging Santa Claus!

My assessment:  That's not far from the truth anymore!

I have told my radio audience that I believe this war will erupt "on or before May 2."   I've said it repeatedly and publicly.  Given the current deterioration in the situation, I would now not be surprised if this breaks out . . .  within the next 72 hours.

If this takes place, there  will NOT be any help coming for you or your family.   Everyone will literally be on their own.

The Russians have spent the past twenty years developing and building nuclear war bunkers for their population.  In those bunkers are food, water, medicines, fuel, machine tools, vehicles.  All the things they need to get-by and recover.