Those of you who have followed my show for awhile may recall that my mom has suffered circulation problems affecting her legs for quite awhile.

She could only walk about 20 feet before the muscles in her legs became starved for oxygen, and hurt so badly she had to stop walking until the blood flow gave enough oxygen and the pain subsided.

Back in September, mom underwent Angioplasty and stent insertion  for her Iliac arteries, to open blockages caused by plaque.

At the time, her circulation dramatically improved and she was once again able to walk like a normal person without having to stop every twenty feet due to pain in her legs from poor blood flow.

Around January of this year, the pain started coming back.

In February it got worse.  In early March it became unbearable.

She went back to the doctor and found that other clogs elsewhere, had gotten worse and her leg ciruclation was once again so bad, it was defined as "limb threatening."

In the morning, I have to take her back to the hospital for surgery; BYPASS surgery.

Doctors will do an Axial-Femoral BYPASS for both legs.

This is basically what it will be: 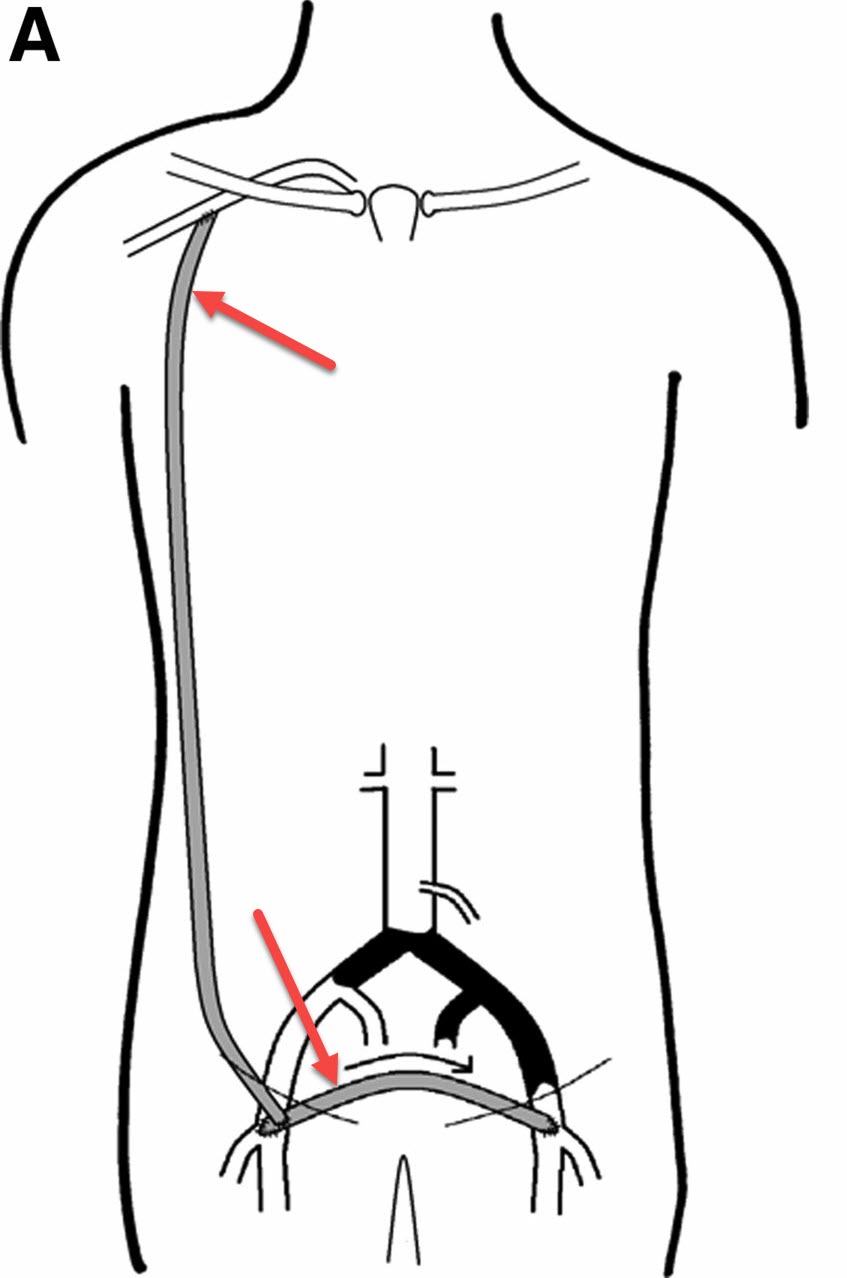 They will tap into her Axial Artery and run a tube down to her abdomen below her belly button.  The tube will then split, one going to her right leg, the other to her left leg.

That will restore good blood flow and she should be fine.

All the pre-testing was done last week and mom is ready to go for surgery.

So this web site may not be updated in the morning on Friday because I will be at the hospital while mom undergoes this surgery.

Prayers for her,  *Kathy* will be appreciated.

Doc just called, the surgery is done, mom seems to have come through it OK.

Doc said the surgery actually began about 9:30, so whatever they did as prep work prior to cutting, took about an hour.

She is not awake or in the Recovery Room yet, so Doc says I shouldn't even bother trying to come up for another hour, but according to him, Mom should be fine.

I went up to see mom about 3:00PM Friday.  She is now in a regular hospital room.  She looked very good, but was clearly under the effect of pain medication; slurring speech, slow reflexes, all of which was expected.

She said there was "soreness" on the side where the surgery was done; also to be expected.

While I was there, two separate Doctors from the surgical team paid separate visits.   They used a Doppler device to "hear" blood flow in her legs and both Doctors were VERY happy with the clear, loud, swooshing sounds of blood flowing generously through both legs and feet.

Distal pulse was completely and easily detectable in both legs, near the ankle and atop both feet.

So they are extremely satisfied that the surgery did precisely what was hoped.   Very good blood flow has been restored to my mom's legs.

I spoke to mom by phone a few minutes ago and this morning she is in a LOT of pain.   Docs came in and gave her a shot of Morphine.

They told her they had to do a LOT of cutting inside and this level of pain is, sadly, expected.

The pain will be managed and is expected to gradually subside.

So this morning, is not such a good day for her pain wise, but no sign of infection and still has excellent distal pulse and blood flow in both legs.

SO if someone pops in, says Hi, and leaves, that's the visit for the entire day.  No one else is allowed in.

I think that's bullshit, but hospitals are places of medical tyranny and the CDC/fedgov has all of them in lockstep.  I mean, after all, this non-pandemic is so not-deadly, they need ad campaign to try to get people to take the non-vaccine, genetic modification, and are content to force people to wear a mask even though it does nothing to protect anyone from an actual virus.

It's like an epicenter of COVID fraud and deceit.

They even closed the friggin cafeteria on the lobby level so anyone coming there to visit CAN'T EAT.   Staff, of course, CAN eat.

It's worth noting that the hospital demanded a COVID test no more than three days BEFORE entering the hospital for this surgery, then performed ANOTHER COVID test upon admission!

So I said to Ellen, the nurse who was admitting my mom, "We had to have mom drive 150 miles to come here three days ago for a COVID test and now you're doing ANOTHER test?"   She responded (you're gonna love this) well, we had to know if she had COVID before she even came into the hospital."   What kind of bullshit is that?   Hell, I could have had it and there I was in the hospital without a test . . . but asking about such things to show the foolery of it, goes nowhere.   The COVID delusion is strong in the medical community despite the 99.6% survival rate.

I don't know what these medical sissies are ever going to do if a real disease comes that has a massive mortality rate.  They've gone out of their minds over a virus that has a 99.6% survival rate.  Can you imagine what they'd do if one arrived with a 50% mortality rate?   I think the medical people would probably be committing suicide!

Anyway, since visiting is limited to one person per DAY, and since I saw mom twice yesterday, when I took her in for the surgery and then visited afterwards, I'm probably going to let my son go up today so he can see his Grandma.

Will keep you posted.

Thanks so very much for the Prayers and good wishes.