The Prime Minister of the United Kingdom was making a speech moments ago when Parliament was interrupted. This is very unusual.

Doctors then informed them that the Queen's health has deteriorated and that she's under medical supervision.

Prince William, Duke of Cambridge, is on his way to Balmoral (in Scotland where the Queen is staying.)

BBC One has suspended all regular programming until 6PM.

All of Queen Elizabeth's children now at her side, report says

>A plane carrying seven members of the Royal Family has landed at Aberdeen airport.

It's not known who exactly is on the flight from RAF Northolt, although we know that Prince William, Prince Harry and Meghan, Prince Edward and Sophie, and Prince Andrew are all travelling to Balmoral.

Aberdeen airport is about an hour's drive from Balmoral Castle.

The traditional ceremony of the Changing of the Guard, which was due to take place outside Buckingham Palace tomorrow morning, has been called off.

(This is way weird.  It seems to most observers familiar with Royal procedures that the only reason there would not be a changing of the Guard is if . . . there is no Monarch for them to protect . . . .)

A single source in Whitehall tells me the Queen has, in fact, died.   This has **NOT** been corroborated by **any** other source.

In addition, a single BBC Journalist tweeted that the Queen has died, then immediately deleted that tweet. 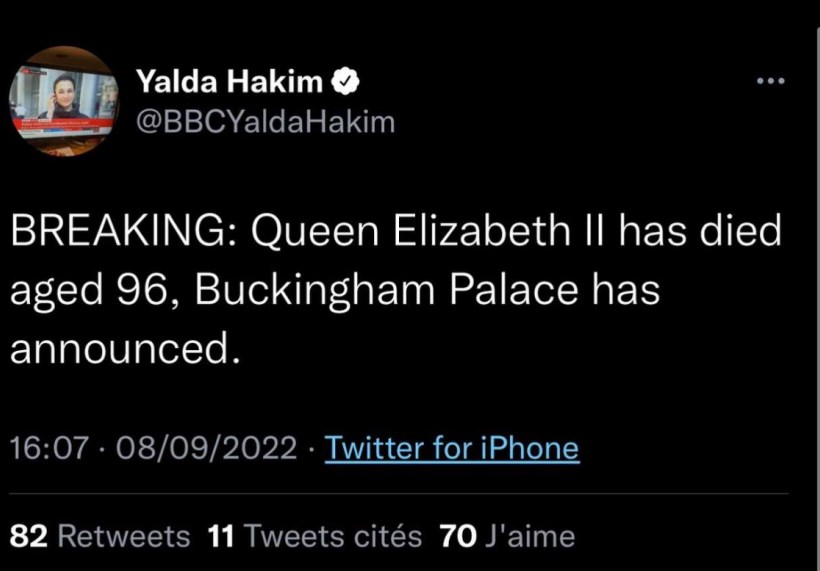 Multiple claims from non-official sources claiming the Queen has died from cardiac arrest.  ALL UNCONFIRMED.

Report just in saying Canadian Prime Minister Justin Trudeau is aboard a plane enroute to London.

From inside the newsroom at Canadian Broadcasting Corporation, staff and reporters said to be "in tears" right now.

The Queen died peacefully at Balmoral this afternoon.

The King and The Queen Consort will remain at Balmoral this evening and will return to London tomorrow.