Reports are coming in from Asia as of 4:09 AM eastern US Time, claiming that the People's Republic of China has "Sanctioned" U.S. Speaker of the House, Nancy Pelosi.   The reports also claim that as a result of being Sanctioned, Pelosi is DENIED ENTRY into China and into Taiwan.

These reports are coming from media persons on the ground inside Asia, but their media outlets have yet to report these claims.

The plane was tracked across the continental U.S., out into the Pacific, and then landed in Hawaii to refuel.

Pelosi's office tweeted a statement from her:

I'm leading a Congressional delegation to the Indo-Pacific to reaffirm America’s unshakeable commitment to our allies & friends in the region. In Singapore, Malaysia, South Korea & Japan, we’ll hold high-level meetings to discuss how we can further our shared interests & values.

Later that same aircraft took off from Hawaii, but tracking of it was then BLOCKED, claiming the plane was no longer being tracked because of engine trouble . . . which is a complete non-sequitur; it made no sense at all.

As of 4:09 AM EDT Sunday, it is not known where Speaker Pelosi's plane is, or if has perhaps landed elsewhere in Asia, as her itinerary did mention stops in Singapore, Malaysia and elsewhere for this trip.

Why the US Speaker of the House is engaging in foreign travel is also a mystery.  Generally, that's why the U.S. has a Secretary of State.

More details as they become available.

It turns out that when Pelosi's aircraft developed engine trouble and it's tracking was turned off, it returned to Hawaii.   Pelosi spent the night there.

This morning, the plane took off from Hawaii out westward into the Pacific.   At this hour 9:18 AM EDT, it is landing at Guam. 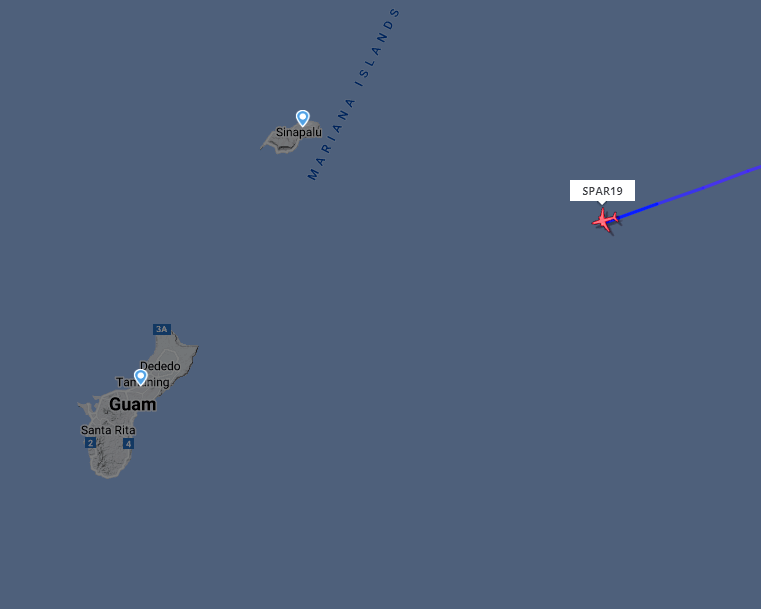 For what it's worth, Pelosi staff are now emphasizing that Taiwan "is not on the Speaker's travel agenda."