Russia is not planning to declare a mass national draft for the war in Ukraine, the Kremlin said Tuesday, just hours after The Hal Turner Radio Show broadcast globally, reported comments about Mobilization from members of the Russian Duma and the higher chamber of their legislature, the Federation Security Council.

The denial comes amid growing speculation that Russia may be looking to reverse its recent mis-fortunes in its six-month invasion of Ukraine by declaring mass mobilization and shoring up its any military manpower shortage.

“Not at this point. No, we are not discussing that,” the state-run TASS news agency quoted Kremlin spokesman Dmitry Peskov as saying to reporters.

“This [question] is for the Defense Ministry. I simply do not have accurate information," said Peskov.

Lawmaker Mikhail Sheremet, a member of the State Duma’s Security Committee and the ruling United Russia party, spoke out in favor of general mobilization on Monday, according to the URA.ru news agency.

“Without full mobilization, [without] switching to the war mode, including the economy, we will not achieve the desired results,” the agency quoted Sheremet as saying.

“I am talking about the fact that today society should be consolidated as much as possible and aim for victory,” said the deputy.

Expressing a contrary view, Federation Council member Andrey Klimov publicly stated "There are no signs of the need for military mobilization in Russia, or the introduction of martial law in the country."  Both men were quoted on Turner's worldwide radio broadcast last night, and within hours, Kremlin spokesman Peskov made the denial statement.

This leads the public to wonder, if they aren't talking about Mobilization, why did Sheremet and Klimov say what they said? 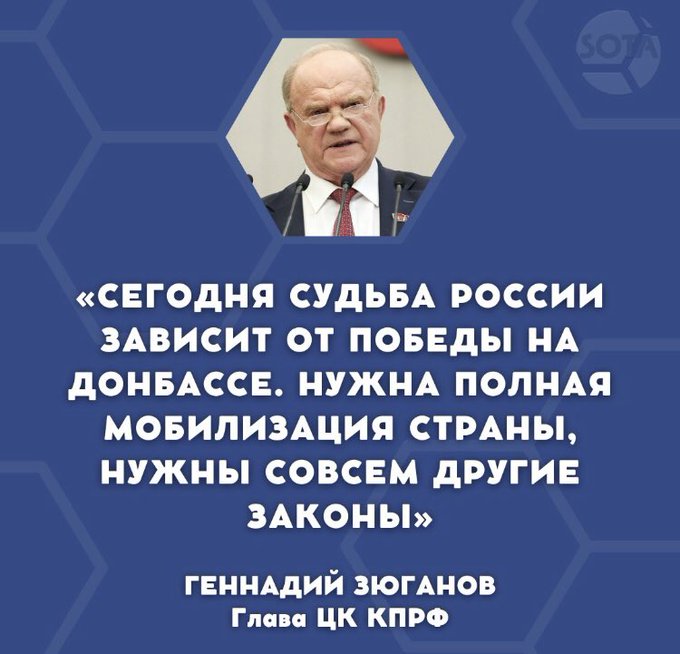 He said it’s time to stop talking about a “Special Military Operation” & openly say it’s a war, and a war which “we have no right losing.”