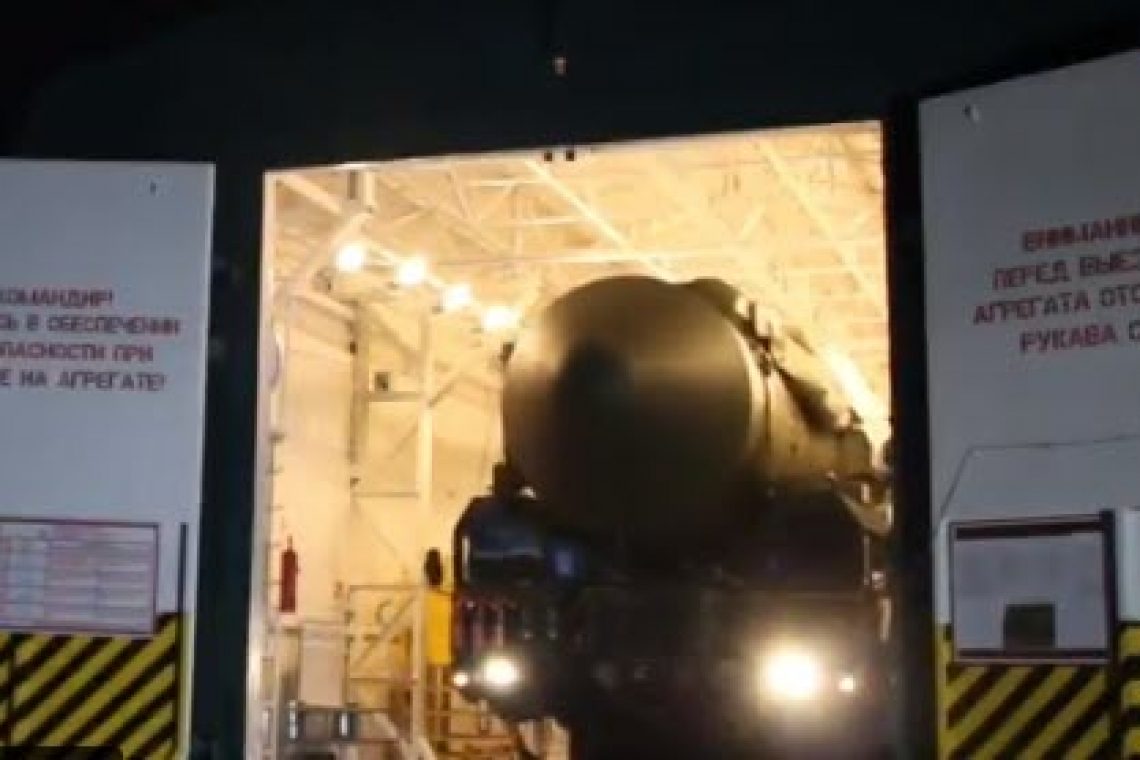 This is what Russia sent:

Yes, that mobile Transport, Erector, Launcher (TEL) is carrying exactly what you think it is.

And what we're seeing is it is coming OUT of the storage facility where it is usually safely and quietly kept.

In fact, we are seeing not one, not two, but THREE of them coming out.

The second one at video time stamp :40 shows "224" on the side, about ten feet back of the driver's door.

Where they (and others like them) are going, no one is saying.

The fact that some of them are coming out, is astonishing.

What you are seeing in the video above is the RS-24 Yars; a Russian intercontinental ballistic missile. It is an improved version of the previous Topol-M.

It is known in the West as SS-29. It uses the same 16x16 wheeled chassis as the Topol-M. Externally it looks similar. However it carries improved missile, that is heavier.

The Yars was developed both as a road-mobile and silo-based system, that would use the same missile. It was first tested in 2007 and was adopted by Russian Strategic Missile Forces in 2010. Its production commenced during the same year. It replaced in production the previous Topol-M.

As of 2016 Russian Strategic Missile Forces deployed 63 mobile and 10 silo-based Yars ICBMs. These were fielded alongside the Topol-M systems on a 50/50 basis. It is planned that the Yars will become the mainstay of the ground-based component of Russian nuclear triad.

This solid-fuel missile is similar to that of the Topol-M. It has three stages. It has a range of 12 000 km. The main difference from the previous missile is that Yars is MIRV-equipped and can carry at least 6 independently targetable warheads with a yield of 100-300 kT. Other sources report that this missile can carry up to 10 re-entry vehicles. It is a huge improvement over the Topol-M, that carries a single 550 kT warhead. It has been reported that the Topol-M can be rapidly upgraded to carry multiple 150 kT independently-targetable warheads.

In 2019 the Avangard re-entry vehicle was declared operational. It is launched on top of the missile, but unlike a regular warhead that follows a predictable path, the Avangard travels at hypersonic speed and can make sharp maneuvers. This makes it much harder to intercept. It was planned that in 2019 a total of 31 Yars missiles will be equipped with Avangard hypersonic gliding re-entry vehicles and will be deployed operationally.

The Yars was designed to evade missile defense systems. This missile maneuvers during the flight and carries both active and passive decoys. It is estimated that it has at least 60-65% chance to penetrate defenses.

A silo-based version of the Yars is compatible with silo of older Russian ICBMs, that were phased out of service. It uses complete infrastructure of the previous missiles. It only takes to load the new missile into the silo. A typical silo-based unit has 10 Yars missiles and command post.

A road mobile Yars TEL is based on Belarusian MZKT-79221 16x16 heavy high mobility chassis. This chassis was specially designed for the Topol-M intercontinental missile. First three and last three axles are steered. So this vehicle is very maneuverable for its size. Also it has good cross-country mobility. The TEL vehicle is operated by a crew of three. The Yars mobile launcher has autonomy on roads of 500 km. It allows the vehicle to operate undetected in an area equivalent to a small European country.

Road mobile intercontinental ballistic missiles are harder to detect and hit. The Yars has a high probability of surviving the first strike, once the country has been attacked. Once on high alert, the Yars missiles can leave their bases and operate in remote forest areas to increase their survivability.

It takes 7 minutes to prepare the missile for launch. The Yars can launch its missile from prepared site, special garage with a sliding roof, or from unprepared position during field deployment. The TEL vehicle can leave its position once the missile is launched.

So the only reason we are seeing these things leaving their garages is because they are now on . . . . High Alert.

This isn't a game.

This isn't a Drill.

Countries don't take LIVE nuclear missiles out of their storage for drills.

The world is heading into more trouble than any of us bargained for over this Ukraine situation.  Things are going very bad, very fast.

The mass-media is NOT warning the people in Europe or in the USA exactly how bad things are getting.

The general public will be utterly blind-sided if (or when) this goes hot.

The Russia Ministry of Defense has issued a statement about the movement of its nuclear missiles:

Among the main objectives of the audit is to assess the real state of affairs and the level of combat readiness of the formation, as well as the quality of the work of the leadership in organizing the fulfillment of the tasks set for the academic year.

The Commission of the Strategic Missile Forces command will inspect the state of combat training, as well as check the coherence of the actions of the military personnel in the performance of missions as intended.

In the course of the check, a special place will be taken by the command-staff, conducted under the personal leadership of the commander of the Strategic Missile Forces, Colonel-General Sergei Karakaev, with the Barnaul missile formation.

During the exercise, at a qualitatively new level, the issues of camouflaging the Yars mobile ground-based missile systems will be worked out, as well as countering modern and promising air reconnaissance means in cooperation with formations and units of the Central Military District.

The main goal of the exercise is to improve the practical skills of the command and control officers of the missile formation and military units during the preparation and conduct of hostilities, the organization and implementation of all types of support.

In total, more than 3 thousand servicemen and about 300 pieces of equipment are involved in the exercise.