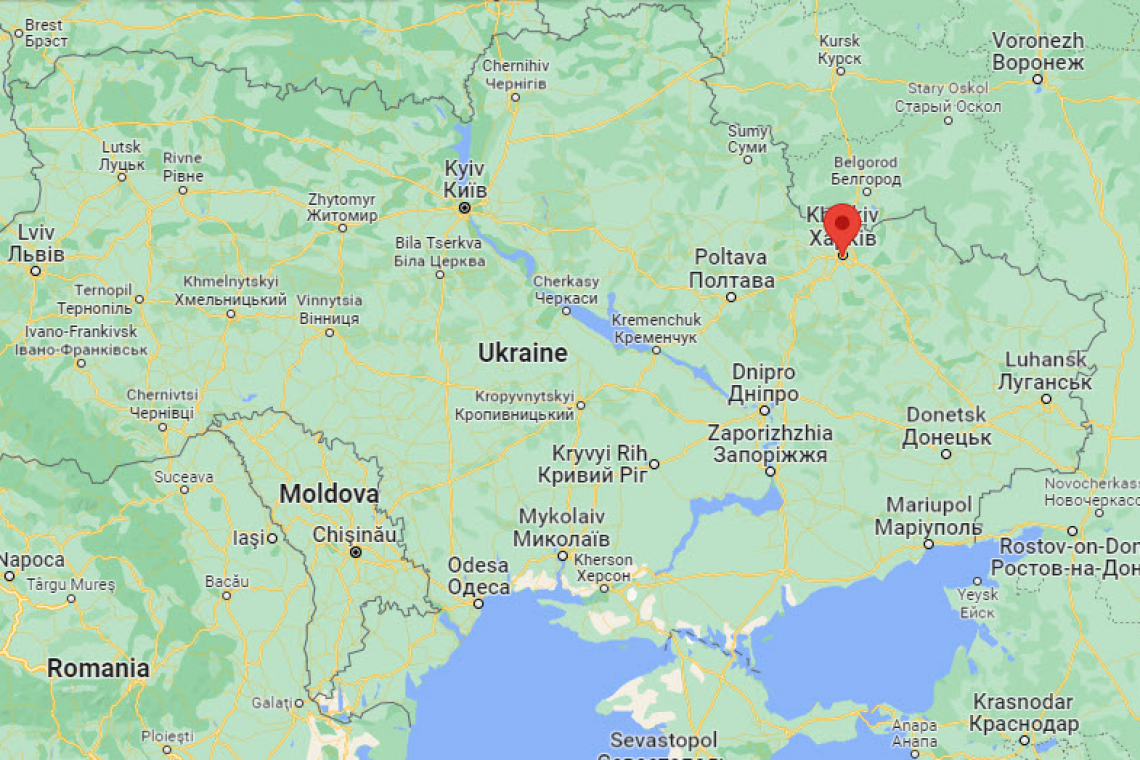 The Russian Army is using regular AM and FM radio to transmit to Ukrainian citizens in the city of Kharkiv.  The  broadcasts are telling them to evacuate that city immediately.

Over the past 48-72 hours, Russian troop build-ups are showing what appears to be "Special Military Operation -Season 2" . . . only with very much more men.

On the map below, the hand-drawn circles in red show the present build-up of Russian forces, and the circles in blue show Ukrainian force locations. 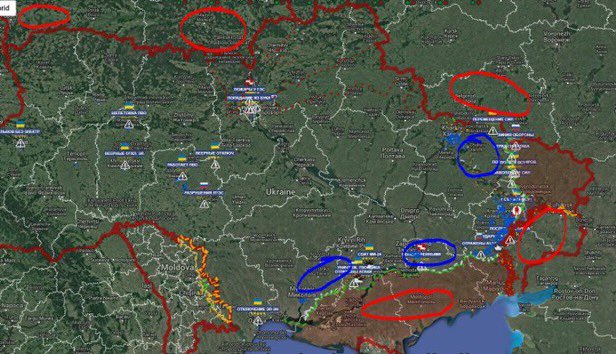 Most of Ukraine's forces are engaged in the southeast of the country.   The Ukraine troops to the east of Kharkiv, are now finding themselves squished between two superior Russian force groupings; one in the Belgorad region of Russia itself, the other in Luhansk.  They seem to be inside a perfect "Pincer" situation.

Ominously for Ukraine, the sudden and very large build-up of Russian troops in Belarus, to the north and northwest of Kiev, looks very much like what existed when Russia initially began its Special Military Operation into Ukraine.   At THAT time, the troops in Belarus, north of Kiev, moved in a 47 mile long convoy toward the city, but stopped without attacking.

It turned out to be a feint; Russia did that so as to force Ukraine to keep essential troops in the north to protect the capital, Kiev, while they moved against targets in the south.   This time, however, it seems quite clear that if/when those Russian troops come out of Belarus again, Kiev could be mince-meat.

In addition, the Russian forces toward the top left of the map, also in Belarus, is an interesting build-up.  Would they swoop in against Kiev, or will they head due south to Lutsk, Rivne . . . or both?

-1 # Both — MANYROUNDS 2022-10-12 12:48
Refer to email of Oct. 2nd, current disposition is progressing toward that end, how rapidly the Russians occupy area shown in Phillip Barnetts video is proportionate to how long we have before U.S. Bombs them, and they retaliate in kind. When they run from Kiev the second time, look out. Thank you Hal.
# sorry — Avanarts 2022-10-12 15:52
That ended up as a reply to the wrong post,
-1 # RE: Both — Avanarts 2022-10-12 15:52
When did they tell you that you should evacuate? Did they say which direction you should go?
# South west... — MANYROUNDS 2022-10-12 17:36
If you are in Kiev, watch the video, just type in Azovmena Prophecy, Phillip Barnett, Pastor. It is worth every minute to watch. Many Ukrainians know of this Prophecy, more importantly, they believe it, as it is coming to pass before their eyes, and yours, and will save countless lives, for the cities mentioned in the U.S. that are hit are named, prudent to leave them now.
# Nuked U. S. Cities mentioned — MANYROUNDS 2022-10-12 18:09
U. S. cities mentioned in Azovmena Prophecy as follows, Wash. D.C., N.Y.C., Boston Mass., Chicago Ill., Cleveland Ohio, Detroit Mi., Los Angeles Cal. San Francisco Cal. Baltimore Maryland. Keep in mind this is all Pastor Barnett mentoned, others have been shown several more, it is possible there is more than only this strike, and at a different time. Pray earnestly for yourselves,and ask the Lord yourselves what He would have you do. That goes for those in eastern Ukraine, Russia, and all of Europe and the mideast, Taiwan, Guam, Hawaii, Korea, Japan, the Phillippines.
+5 # RE: RUSSIAN MILITARY RADIO BROADCASTS TO CITIZENS IN KHARKIV: "EVACUATE CITY NOW" — TexasWolf 2022-10-12 11:34
The Russians are just getting started.
+2 # Alaska — ellis 2022-10-12 11:11
This is actually funny. In the 80’s, Russia used to do this to our radio stations in northwestern Alaska. They would overpower our stations with propaganda and we couldn’t even hear our weather reports. Old tactic.
+2 # RE: Alaska — Forrest Mosby 2022-10-12 20:32
Quoting ellis:

This is actually funny. In the 80’s, Russia used to do this to our radio stations in northwestern Alaska. They would overpower our stations with propaganda and we couldn’t even hear our weather reports. Old tactic.

Offshore pirate stations used to do the same thing out of Mexico and from boats out past the 12 mi limit
+5 # boss — Boss 2022-10-12 11:05
Looking at the map, Kharkov is near Russia or is it Belarus?
I would try to get across the Ukraine border.
Citizens of Kiev have been told to leave the city. Where do they go? Will they be stopped from leaving Ukraine? Just wondering at the details. I would be in the car going as far away as i could. Prayers for the civilians.
+6 # Anticipating a false flag nuke? — TerraHertz 2022-10-12 11:00
Given that NATO/USA leadership is psychopathic, it's reasonable to expect that they will use nukes first. But being devious and evil, they won't do an actual military strike against their opponents.

Instead they'll do something like nuke a Ukrainian city, and claim Russia did it. Makes them look justified in striking back with nukes, which is what they want.

I wonder if the GRU has wind of a US plan to nuke Kharkiv?
+3 # "Kiev - President Zelensky" — t.n.kuss@hotmail.com 2022-10-12 10:59
I've wondered all along "Why is Kiev and President Zelensky Treated with Kid Gloves by Russia?" When I hunt Rattlesnakes "I always Take Their Head Off to Destroy Their Body" meaning "It's appearing to me This War is Being Prolonged by Design."
+1 # By design — Rembrandt1981 2022-10-12 22:25
Yes, Putin could be going slow seeing how the countries are depleting their own weaponry. It could be a strategic move by Putin. Why not!
Laughing all the way to the finish line.
+1 # Id Go Ahead — Forrest Mosby 2022-10-12 10:44
And haul ass….Just because
# Immediate evacuation. Why? — Doug Brown 2022-10-12 09:47
Another Ukrainian counter-offensive planned?
Something, if even a little, to save face?
Isn't this area part of "New Russia?"
Seems like a direct comment, re: the annexation.
+2 # Ukraine dangerous on steriods — Doug Brown 2022-10-12 09:18
If Ukraine has nuclear, they have no rational
reason not to use.
If losing it might be go for broke.
-17 # Believe this — meanize1962 2022-10-12 07:58
You are afraid of Russia well let's see I'll give you a reality scenario here let's see how much you believe it I just read in the paper the New York times it's a Russian have 40 ships outside of Rhode Island and you're getting ready to launch an invasion of Rhode Island of course you're not going to believe that story I just told you it's unrealistic you can't happen they couldn't even get 40 chips all the way over here so let's cut it out about being scared about the Russians how he might as well go to New York City go to New York City enjoy yourself you're trying real hard to make friends with America today don't you feel sorry for him just think of it they can't even invade Rhode Island they were spending a trillion dollars a year what a waste of money it's affecting the value of our currency we could probably bring the value of our currency up 20% the first year we cut back our cup back our defense budget
# MUPPET — beattle55 2022-10-12 13:20
Are you the chef from the Muppet show? Cause you sound like a moron.
+4 # RE: Believe this — AndyBenefield 2022-10-12 08:48
I still think it’s dope...
+14 # Believe this — chip 2022-10-12 08:43
Hal,,, enough of this guy Please???
+18 # Perhaps...perhaps.... — Doug Brown 2022-10-12 08:55
It's Hal's designated Handicapped
Section. Innocous. Inoffensive.
He isn't rude just bothersome.
Harnass insulted the crap out of you,
This guy just sputters.
+9 # Do not even try to read anymore. — Steve in Buffalo 2022-10-12 10:24
See who it is, red button, nothing to see there. Moving on to find something intelligent to read.
Last comment from me on this subject.
+2 # Kiev's typical response ? — SBGlett77 2022-10-12 07:33
If Kiev responds to this warning to civilians as they have done in the past, they will threaten or kill those trying to evacuate.
+10 # Leaderless West. — Hope springs 2022-10-12 06:29
Thanks Hal. It's all coming to a boiling point. With the mid term elections and the snub from OPEC, the US is getting desperate. Im expecting a nuclear strike on Russla by the US. Only hope it doesn't happen.
The lack of leadership and irresponsibilty in the US and NATO is astounding.
+6 # RE: Leaderless West. — jrd803 2022-10-12 07:56
I saw on warnews247.gr that the US was PO'd at the OPEC countries and as warnews247 put it "sent OPEC packing to the BRICS". How will that help anything for the US?

The behavior in Washington seems a bit childish IMO. And that can be bad, especially if it is spoiled rotten childish behavior.

Kippis
+39 # Midnight oil — MikeAvram 2022-10-12 03:52
Thanks for burning that midnight oil for us Hal. It gets harder to do with age! Keep that info a flowin!
Refresh comments list
RSS feed for comments to this post
JComments
by sur.ly
100% Trusted Informational Platform Website 2021