Readers of the Hal Turner Radio Show web site, being far smarter and more intuitive than the general public, know all too well how the mass media is used by governments to "set the narrative" and drum-up public support.  Well, look what is now appearing on Russia state TV . . .

The short video clip below from Russian TV earlier today shows the news people openly discussing the invasion of northeast Poland, all three Baltic states (Lithuania, Latvia, and Estonia) as well as Gotland Island off the coast of Sweden:

Most interesting about it is the reference text on the map to "NATO." 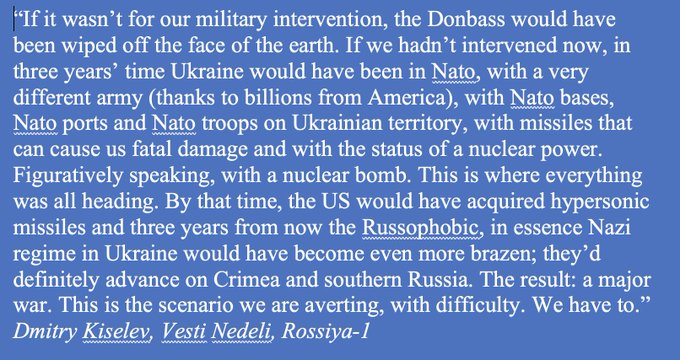 The words above about Ukraine can well fit the nations of Poland, and all three Baltic states.  The words indicate how Russia views being gradually surrounded by NATO bases, all with missiles aimed at Russia.

Any movement at all against _any_ of those nations would trigger the NATO Mutual Defense Treaty, Article 5, --collective self defense -- and would literally mean the outbreak of World War 3.

It now appears that horror may not be too far off.

Listeners to the Hal Turner Radio Show know from very recent shows, that I pointed out Russia's massing of enormous numbers of troops near its western border and in Belarus, was "for NATO, and not Ukraine."  Moreover, I explicitly stated that "I think after Ukraine, Lithuania will be next and the rest will be told, either you get rid of NATO or you get what Ukraine just got."

Now, it is beginning to appear my words are about to come true.

For Russia to be using its state-owned TV news to talk this up, shows me things in our world are about to get very, very, much worse.