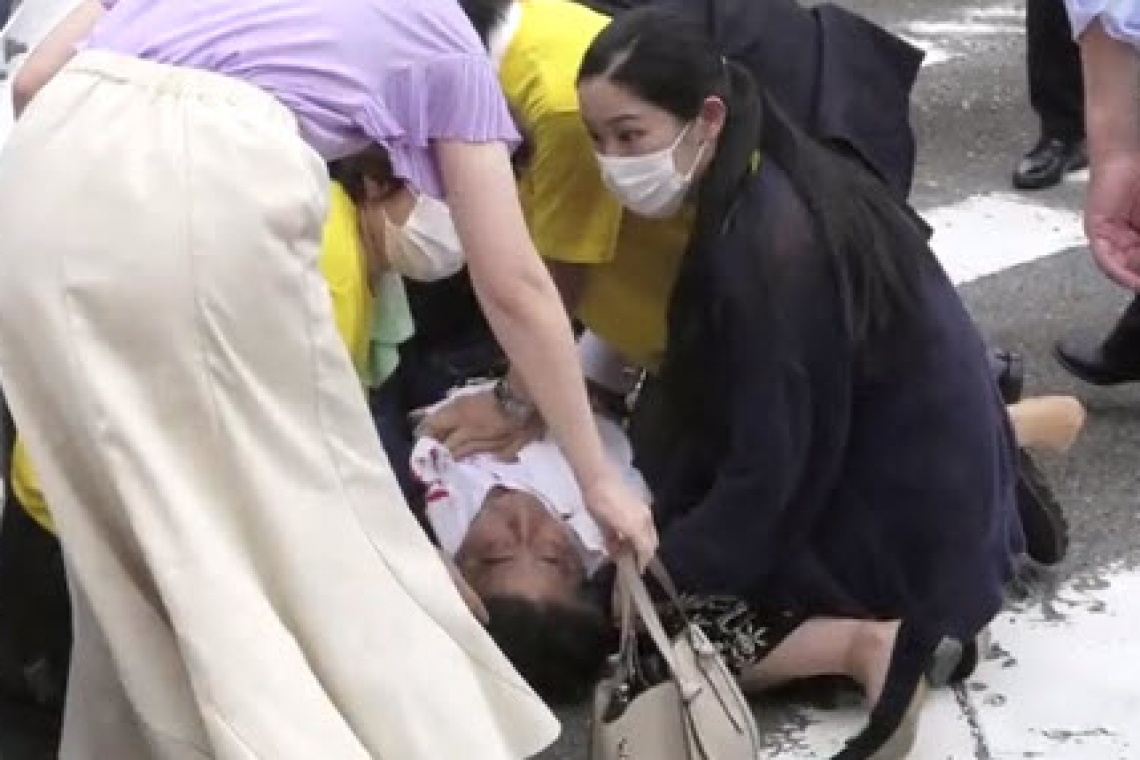 The scam of COVID, the damage and death of the COVID vaccines, and the plummeting economy have finally prompted someone to KILL a political leader.  Former Japan Prime Minister Shinzo Abe was shot and killed last night while on the campaign trail in Nara, Japan.

Former Japan Prime Minister Shinzo Abe was assassinated in Nara on Friday while campaigning for the upcoming election.  The 67-year-old world leader was rushed to hospital in grave condition, Prime Minister Fumio Kishida said in an address to the nation. A suspect has been taken into custody.

The Nara city fire department said that Abe was in cardiopulmonary arrest before he was taken to the hospital.

Photographs published by the Japanese agency Kyodo showed Abe lying face-up on the street by a guardrail, blood on his white shirt. Some showed people crowding around him as he lay unconscious.

Nara city’s emergency services said he had been wounded on the right side of his neck and left clavicle.

The incident occurred at around 11.30 am (8 am IST). Abe was making a campaign speech on a street outside the train station ahead of Sunday’s election to the upper house of Japan’s parliament.

Two witnesses — an NHK reporter and a female attendee — told NHK that they heard two gunshots. The woman said that though the first gunshot was loud, she did not see anyone fall. But after the second shot, she saw ex-PM Abe collapse to the ground.

The alleged shooter was tackled and taken under arrest as seen in the social media posting below:

Former Prime Minister Shinzo Abe was injured in an apparent gun attack while taking part in a campaign for the House of Councillors election in Nara City at about 11:30 a.m. on Friday. He suffered cardiopulmonary arrest and has been taken to hospital, according to firefighters. pic.twitter.com/SgKZEvZS9j

He is believed to be an ex-military member — a former maritime self-defense force member, reported Fuji TV.

A witness to the attack told NHK that the apparent shooter did not attempt to escape after the shooting. He instead laid down the gun and remained on the spot as he was caught by security personnel.

Shinzo Abe, Japan's longest-serving prime minister, was known for his hawkish foreign policy and a signature economic strategy that popularly came to be known as "Abenomics".

A conservative nationalist by most descriptions, the 67-year-old Abe led the Liberal Democratic Party (LDP) to victory twice.

His first stint as prime minister was brief - for a little over a year starting in 2006 - and controversial. But he made a surprising political comeback in 2012, and stayed in power until 2020 when he resigned for health reasons.

Japan was in a recession when he began his second term and his economic policy - built on monetary easing, fiscal stimulus and structural reforms - was credited with helping growth return to a faltering economy.

He also oversaw Japan's recovery from a massive earthquake and tsunami in Tohoku in 2011, which killed nearly 20,000 people and led to a meltdown of the Fukushima nuclear reactors.

Video of the actual shooting has surfaced on Social Media.  In the video below, notice how the crowd just stands there after two apparently shotgun-type blasts.   This type of crime is so rare in Japan, the people there didn't react the way you would see in places like the USA.

In the USA, people would be stampeding to safety.