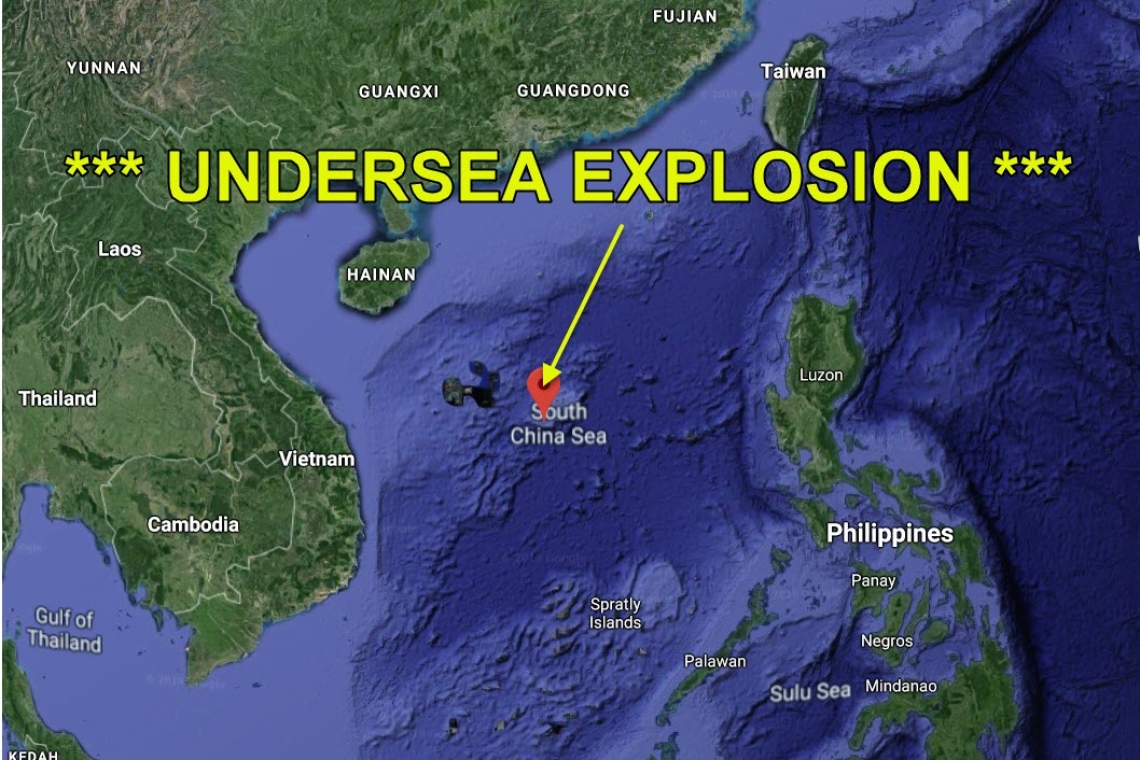 Details are sketchy as of 6:22 PM eastern US time, but military sources are saying an explosion took place at a depth of approximately 50 Meters, which caused an underwater shock wave of such sudden presence, and of such strength, that the explosion itself "had to be between 10 and 20 Kilotons."  Those sources (military) also say explicitly "An earthquake has been ruled out."

United States submarines routinely operate in that area of the world's oceans.

If an explosion of that magnitude took place, it could reek havoc with the submarine(s) and their instruments; perhaps forcing them to leave an area, or perhaps put into port for re-calibration or repairs.

There is nothing in the area of the South China Sea which, on its own, can account for such a possible event.

Details remain very sketchy at this hour, but tune-in to the Hal Turner Show tonight on WBCQ (7.490 or 5.130 AM) or WRMI (9.455 AM) or KYAH 540-AM "Utah's Talk Authority" for the latest details.  You can also tune-in here on the net using the LISTEN ONLINE button in the menu bar above.  (Those internet links do not go active until about an hour before the show starts, and stream commercial-free music until the show begins at 9:00 PM eastern US time (GMT -0500)

Radiation is now being detected at shore monitoring points around the South China Sea!

According to this official map from the uRADMonitor Global Environmental Monitoring Network, "significant" radiation readings are now registering on their radiation monitors, shown on the map below:

You can view these LIVE readings for yourself HERE

Did China detonate a small, tactical, nuclear device to send a warning to the United States over the US Senate and US House approving the Hong Kong Democracy Act, which China views as an "assault" upon China's internal affairs?

Has China had enough of US "freedom of navigation" exercises in the South China Sea?

Is China feeling the sting of economic downturn from its Trade War with the USA, and are they "upping-the-ante" signaling actual war?

They read this site because they know to an absolute certainty it is 100% accurate in all reporting.   They also know that Hal Turner spent 15  years working with the FBI, and his final 5 years (2003-2008) handling National Security, Terrorism, and Foreign Counter-Intelligence with the FBI Joint Terrorism Task Force (JTTF)

In that role, Turner received "Extra-Territorial" operating authority from the Office of Intelligence at FBI HQ in Washington, DC.  That authority enabled Turner to travel around the world and interact with foreign Intel persons and agencies with whom he still maintains relations.  They feed him info that the mass media never gets close to.

This web site routinely provides INITIAL breaking news worldwide thanks to Hal Turner's intelligence colleagues.  Your support of this site make it possible.   If you wish to see this site continue in existence through December, PLEASE click the yellow "DONATE" button in the right column above and make a contribution.