With his invoking of "Emergency Act" war-type powers, and his Order to seize bank accounts of anyone found donating to the trucker's Freedom Convoy, Canadian Prime Minister Justin Trudeau has apparently triggered a BANK RUN in Canada.

The withdrawals are so widespread Canada's largest banks Royal Bank, BMO Bank of Montreal, and CIBC Bank, ARE ALL OFFLINE!

Canadians are already talking about it online:

Stopped by the bank on my way home to request all my funds only leaving enough for direct withdrawals like insurance. I overheard the couple in front of me, eastern European, requesting hundreds of thousands as well. Just between two clients, close to 1/2 a mil.
Nice job Junior! pic.twitter.com/gIW6HMjHV2 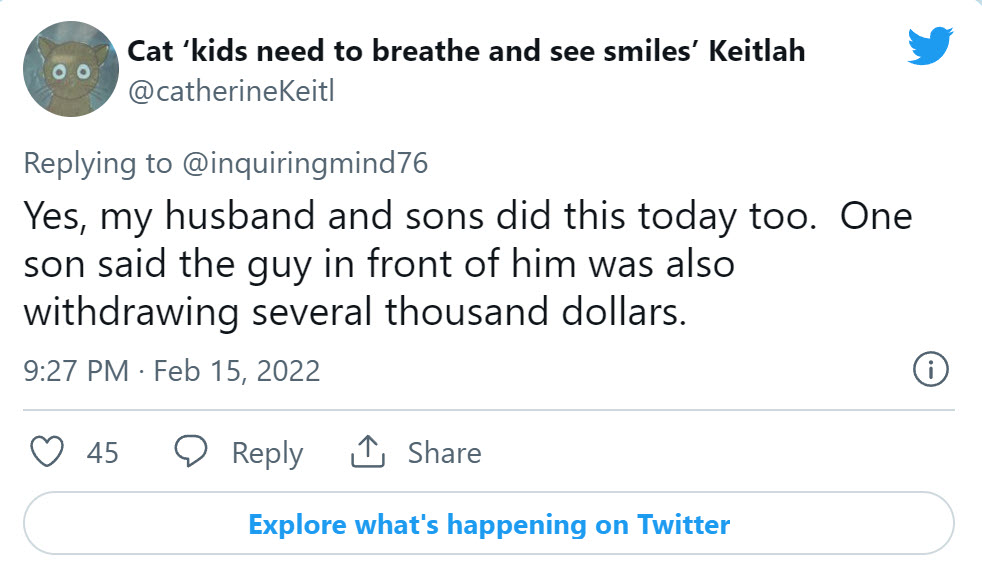 What's next?  Lose your money if you criticize Dear Leader?  Who knows . . .

I am not a citizen of Canada and have no involvement with the Trucker's Freedom Convoy at all.   I am not in contact with anyone participating in that effort and since I neither reside nor work in Canada, I do not have a horse in that race. The outcome of these matters has no effect on me either way.

Yet as a casual observer, it seems to me that people would be well advised to realize how such things like large, sudden,  money  withdrawals and Bank web sites offline can spread on their own, and maybe Canadians should take steps to assure their own money is safely out of the banks?

Why take a chance?

Signs are already being noticed that things are going bad with the banks up there:

🚨Canada's largest banks are all offline.

Did Trudeau try to hack into their databases?

Did the U.S. hack them first, to stop it?

What could cause all three to crash on the same day -- hours after Trudeau's expropriation order?