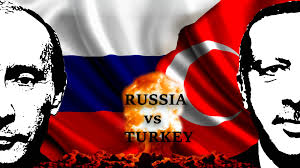 According to Covert Intel Sources in Moscow, Turkish President Recypt Erdogan is violating agreements with Moscow by allowing heavy armor and weapons systems to enter Syria and then go into possession of Turkish-Backed rebels.

Since the beginning of last week, Turkish troops and pro-Turkish terrorists have lost almost a hundred units of armored vehicles illegally transported to Syria, and it’s not Syria, but Russian military aviation that is crushing them!

According to local and foreign sources, today alone Turkey lost at least 23 tanks in Syria (including 4 Leopard tanks), about 50 armored personnel carriers and armored vehicles, 18 MLRS installations, more than 20 military trucks and 2 local warehouses with weapons and ammunition.

Attacks by Russian military aircraft were carried out mainly on the largest accumulations of equipment, and often, armored vehicles were destroyed immediately when crossing the Turkish-Syrian border.

Russia is actively maintaining contacts with the Turkish side, and as soon as Ankara declares that "it knows nothing about the illegal crossing" of the Syrian border, attacks are carried out on columns and convoys by Russian attack aircraft.

This is a mess of huge magnitude.  Turkey is a NATO ally, but Turkey cannot invoke the NATO treaty because the conflict taking place with Russia is inside Syria, not inside Turkey itself.  Put simply, when Turkey entered Syria without permission, they brought whatever happens upon themselves.

Whether this escalates into something Biblical remains to be seen, but this development is stunning in its implication for the region, and for the world.