Ukraine Counter-Offensive So Far: More than 4,000 Dead in Two Days 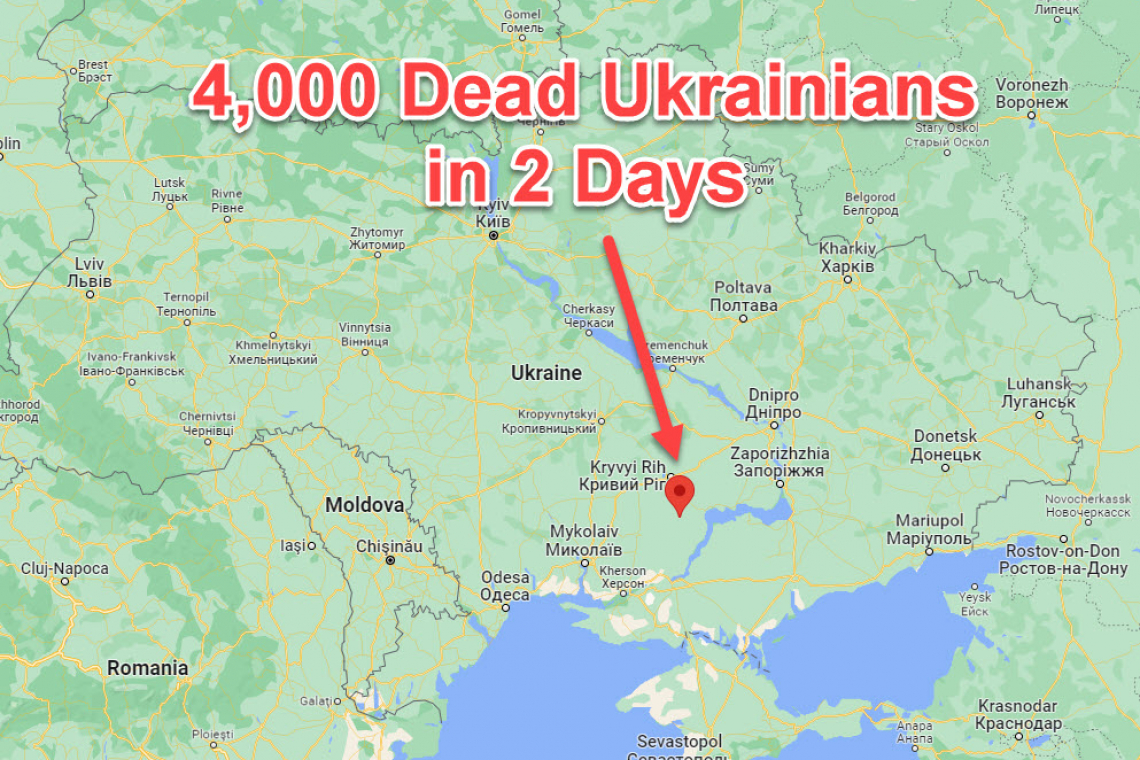 Ukraine launched a counter-offensive against Russian forces earlier this week. That counter-offensive is presently ongoing.  The death toll in just one area: At least 4,000 dead on the battlefield, and getting worse.

Covert intel sources have CONFIRMED to me that Ukraine is suffering horrifying losses.  More than three sources - all independent of each other -- are reporting there are at least four-thousand dead Ukrainian soldiers, still laying on the battlefield, "At Sukhoi Stavka, on the outskirts of Vysokopole, and near Posad-Pokrovsky" as shown on the map above.

While Ukraine DID make advances and DID penetrate Russian defense lines, there is an actual slaughter taking place; with very heavy losses on both sides, but with Ukraine suffering far more losses than Russia.

On the Hal Turner Radio Show last night, I reported to my audience that the "ring road" around Moscow, was closed to public traffic and was filled with Military vehicles and equipment.  Moscow is at least 600km away from the battlefield.

I have just received VIDEO from Friday, showing the blocking of the Ring Road around Moscow, to civilian traffic.  This was taken by a motorist in Russia yesterday (Friday) as the blockage was in progress:

The motorist in Russia said "This road has **never** been closed to civilians like this, or for this long, for any military activity.  This is very unusual."

Those military units set out last might (Moscow time) for the front.   At typical convoy speed, they will begin arriving at the front Saturday afternoon, Moscow time.

Upward of seventy-five-thousand (75,000) additional Russian troops are on the move.   Those troops came from Russia's Eastern Military District, all the way out by Vladivostok, and were moved to the Moscow area over the past three weeks.  Initially, it was thought that these troops would be used in normal troop rotation.  However, it NOW appears that Ukraine's counter-offensive may have resulted in re-tasking of those troops to the front as reinforcements.

All of this additional fighting and death is a direct result of the United States and Europe interfering in Russia's Special Military Operation.  Without the west assisting Ukraine, this conflict would have already ended with a Russia win.   All the additional Ukrainians who are being killed, are dying because the US/EU/NATO are pushing the Ukrainians forward in additional battles.

How much longer that will last is not clear but yesterday the world got a sort of hint: the GERMAN Ministry of Defense announced "We have supplied Ukraine with large quantities of weapons and ammunition but we have reached our limit."

As more and more European nations come to that same conclusion, the fate of Ukraine will become self-evident.