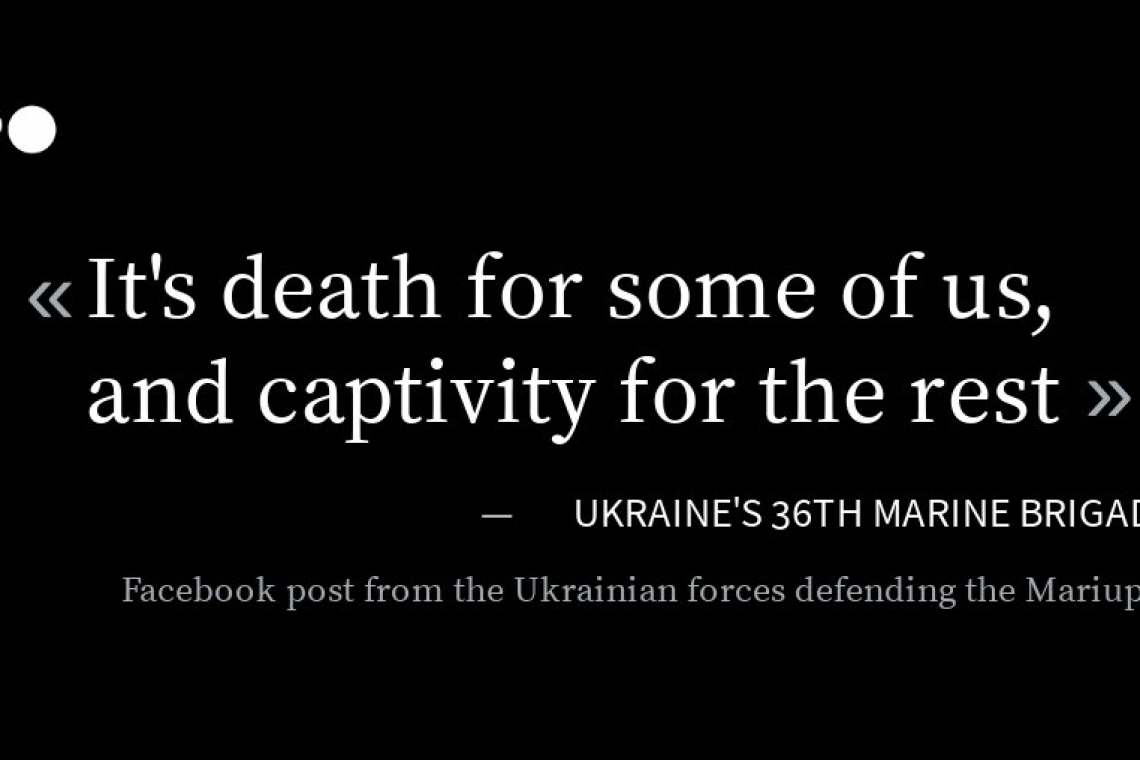 This morning the 36th Separate Marine Brigade of the Ukrainian military defending Mariupol released a "farewell" message on their Facebook page saying they are running out of ammunition and asking Ukrainians to remember them. [translated]

“Dear Ukrainian people. We, the 36th Marine Brigade named after Rear Admiral Mikhail Belinsky, left the Crimea without changing the oath of 2014 and continued to adequately fulfill the tasks of defending Ukraine.

Since the beginning of the war, we have been defending Mariupol for 47 days. We were bombed from planes, we were fired upon from artillery, tanks and other weapons. We defended with dignity, doing the impossible. But any resources that have a property run out.

During the hostilities, we were once given 50,122 shells, 20 mines and a few “enlaves” and Elon Musk’s Starlink - thanks, Elon, he withstood a lot of air strikes and is still working. Nothing more was given to us.

Without B / C, not being able to defend ourselves, the enemy gradually pushed us back to the Azovmash plant, surrounded us, bound us with fire, and now is trying to destroy us. There was an option to bring reserves to us in order to strengthen and continue the defense. There were options for the brigade to make a breakthrough and go out to their troops. We reported this to OTU "Vostok" and they began to plan the operation. Sodol, Delyatitsky tried to do something, but their senior staffs turned away. We reported this to the OOS, they said "hold on, we are working," they promised a helicopter, which never arrived. We talked with the commander in chief, who promised to deblockade.

We spoke with the Guarantor, who guaranteed us either a political or military solution to the situation. For more than a month, the Marines fought without replenishment of ammunition, without food, without water, almost slurping from a puddle, and dying in packs. The mountain of the wounded makes up almost half of the brigade. Those who have not been torn off limbs and can walk are returned to duty. The infantry was all killed, and artillerymen, anti-aircraft gunners, signalmen, drivers and cooks are conducting rifle battles. Even the orchestra. We are slowly ending.

Wise generals advise taking ammunition from the enemy. Probably, these soviet SUVs have not died out, so a lot of people will die for them in vain. There were chances. There were opportunities, but because of the cowardice of reporting vertically, they were not realized. No one wants to communicate with us anymore, because we are decommissioned. Today there will probably be an extreme fight, since there is no BC left. Next, hand to hand. Further, for some, death, and for some, captivity."

Perhaps if the government they're trying to defend didn't spend eight years bombing civilians in Luhansk and Donetsk, or sign the Minsk Agreement then utterly fail to abide by it for five years, or absorb NAZIS into its government, police, and military, none of them would be in the position they're in now.

It's hard to feel sorry for men who are trying to defend the indefensible (ideologically.)   They are CHOOSING death.

They still can surrender.  If they don't, then they made the choice to die when they also had a clear choice to live.