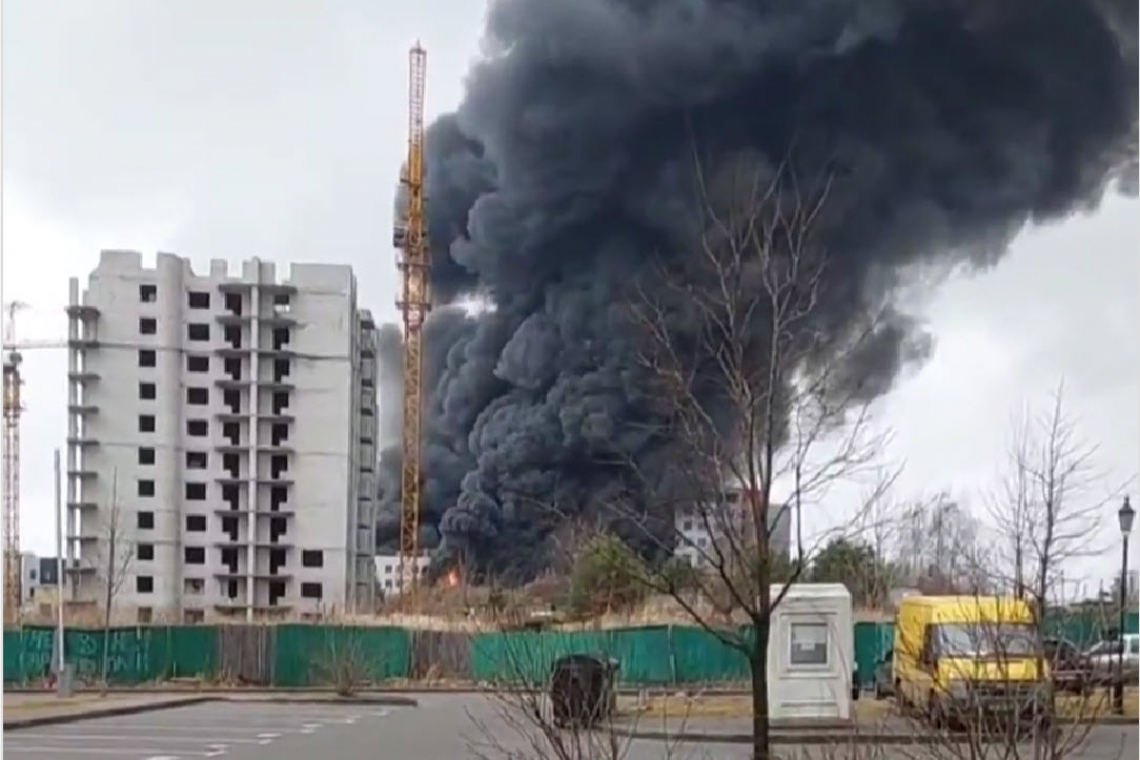 The Ukraine Parliament, called the Verkhovna Rada, passed a law this morning allowing for Russian-owned properties in the country to be forcibly seized.  Homes, businesses, cars, and such, owned by everyday citizens, can now be taken simply because they are Russian.  It is precisely this ethnic hatred and abuse of Russian-speaking Ukrainians, that caused the Russia Army to have to enter Ukraine - and STILL the Ukrainians will not stop.

+5 # "American Citizens being Dragged into a War" — t.n.kuss@hotmail.com 2022-03-03 15:43
I do not believe any rational American Citizen wants to be "Dragged into World War 3 Endangering the Lives of All Family Members and Friends" having "The Youth of America Drafted into Military Service to Die in a War Only Politicians Desired" without volunteering to "Spill Their Blood on the Battlefield." Chief amongst the War Munkers is "The Democratic Party" followed by "The Republican Party Too" as remember "Every Shout for Sanctions is a Vote for War." Corporations making Military Products "Pay Big Kickbacks and Payoffs to Our Honest Congressmen" through "Various Methods to Hide the Dirty Deed."
+2 # Might France going up in Flames — Garyhines 2022-03-03 15:00
Hi Hal when idiots like Macron saying the worst is yet too come .you might see France going up in giant ball of flames Hal.gives you something to think about.
+14 # Cancel culture — Tim421 2022-03-03 12:54
The cancellation of Russia is a great example of the current trend of destroying anyone with a different opinion of the mainstream leftist elites. They have decided Russia bad, Ukraine heroic so Russia must be cancelled. No different than the truckers in Canada or the right leaning web sites.
+5 # RE: UKRAINE PARLIAMENT APPROVES LAW TO ALLOW SEIZURE OF ASSETS OWNED BY RUSSIA OR RUSSIAN CITIZENS IN UKRAINE — Paul Kurzlee 2022-03-03 12:31
Why don't Putin just bomb the rada and be done with it. Do it when it is in session that would end all this horse shit in one go.
+2 # What Would Kennedy Have Done? — Doug Brown 2022-03-03 11:43
Not quite a title for tat comparison
But close enough.
What if the USSR hadn't backed down?
+1 # With ussr — defbydelta 2022-03-03 13:12
IT would have been a more equal set of powers.

The achievment of world domination quickly moves to war on human liberty.
+13 # They didnt back down — daniel_martin 2022-03-03 12:09
Keneddy made a agreement. He removed the ICBM from Turkey and Rússians removed from Cuba. Do you think the Rússians are Crazy and put-in Missiles in Cuba out of the Blue? No, It was a response for Júpiter ICBM in Turkey. Turkey-Russia hás the same distance Cuba-US
+15 # Unbelievable ... — Pierre Derelicto 2022-03-03 11:11
Ukraine is genuinely negotiating for peace, aren't they? The headline of this story tells it all -- and it perfectly describes every one on the other side of the fence from Russia on this one: the issue is one of a bunch of crooked jerks thinking they are entitled.

Who votes for ONE FREAKIN' PENNY of US TAXPAYER MONEY being wasted on Ukraine?

Elected "representatives" -- on both sides of the aisle -- have completely lost touch with the present reality facing their constituents and this nation. We're starving, while they ship off BILLIONS for a corrupt nation of thugs and assorted other scumbags.
+6 # RE: UKRAINE PARLIAMENT APPROVES LAW TO ALLOW SEIZURE OF ASSETS OWNED BY RUSSIA OR RUSSIAN CITIZENS IN UKRAINE — Igorbzo 2022-03-03 11:01
Quoting TheProphet:

Just like the Nazis did to the Jews and Gypsies in Germany before World War II, they are doing to the Russians in Ukraine now. And the Israelis are offering to help the Nazis?

Our government no longer supports the will of the majority of the American people.

n English, Kiev appeared in print as early as 1804 in John Cary's "New map of Europe, from the latest authorities", and in Mary Holderness's 1823 travelogue New Russia: Journey from Riga to the Crimea by way of Kiev.[38] The Oxford English Dictionary included Kiev in a quotation published by 1883, and Kyiv in 2018.[39]...

The Ukrainian version of the name, Kyiw, appears in the Volume 4 of the Geographical Dictionary of the Kingdom of Poland, published in 1883.[40]"

...try getting something right.

First: your use of its should have been the contraction it's.

And you didn't provide any response of value to my questions.
-13 # RE: UKRAINE PARLIAMENT APPROVES LAW TO ALLOW SEIZURE OF ASSETS OWNED BY RUSSIA OR RUSSIAN CITIZENS IN UKRAINE — Linda Seikkula 2022-03-03 10:55
A simple solution. Ukraine is a Sovereign Country. If anybody with Russian heritage wants to be Russian in a non Russian Sovereignty then leave Ukraine and move to Russia.
Problem solved. See how simple it is.
# Linda Seikkula except for 1 thing... — Palehorse 2022-03-03 19:52
|

That will not solve the missile positioning problem
that the US/NATO clowns want to introduce on
the Ukrainian soil to threaten Russia with, now will it.
+13 # Ukranian Reality — TC 2022-03-03 10:54
First, the government is not Ukranian. It is a collusion beween well connected corrupt oligarchs, the US State Department and NATO. Its function is to rip off the Ukranian people in peacetime and to use them as cannon fodder or propaganda props in war.

Second, the aid everyone is giving is what the fake government uses to hire mercenaries. Some are Ukranian, there is not much work that pays left, and some are not. But the guys who are killing the Russians are doing it because they are paid not because they are patriotic.

Third, Zelenko is a criminal who will “never surrender” because he does not want to face any evidence or justice. He doesn’t care how many Ukranians die as long as he gets away with it and can retire to his mansion in Miami.

Last, this vote does show that the country needs to be partitioned to reflect its different ethnicities before Lenin put it together in 1917. Like Yugoslavia it is a country with different languages, different religions, many different cultures thar was cobbled together by the communists. Like Yugoslavia it will do well if the people of each state are allowed to choose their own way of life and with whom they want to be associated.
# American Reality — oldschool 2022-03-03 16:06
"First, the government is not American. It is a collusion between well connected corrupt oligarchs, the US State Department and Bankers. Its function is to rip off the American people in peacetime and to use them as cannon fodder or propaganda props in war."
,,,,,,,,,,,,,,,,,,
TC, I could not help but to use a few of your words. They seem to be very fitting to the country I live in.
+6 # Church of Satan — White Lightning aka Raptor 2022-03-03 11:01
It is a collusion between well connected corrupt oligarchs, the US State Department and NATO. The ETERNALLY DAMNED to LIVE WITH SATANIN SODOMITES!
+11 # Awful display of racial hatred — BilboBaggins 2022-03-03 10:47
I ordered my Russian coffee mug today. Searching for local businesses to support.
+3 # RE: UKRAINE PARLIAMENT APPROVES LAW TO ALLOW SEIZURE OF ASSETS OWNED BY RUSSIA OR RUSSIAN CITIZENS IN UKRAINE — Lambs Servant 2022-03-03 10:40
That’s not going to deescalate things at all.
+11 # No Class Citizens — TheProphet 2022-03-03 10:38
Just like the Nazis did to the Jews and Gypsies in Germany before World War II, they are doing to the Russians in Ukraine now. And the Israelis are offering to help the Nazis?

Our government no longer supports the will of the majority of the American people.
-12 # Holodomor — Remedylink 2022-03-03 10:24
As America is having to deal with the consequences of our slavery past, Russia is now dealing with the consequences of the Holodomor. So much generational pain to be unraveled.
+9 # RE: Holodomor — TC 2022-03-03 11:15
We usually make a distinction between the United States, a federation of states, and Alabama, one of its states. A decision by the United States may not be the decision of the citizens of Alabama. The Union of Soviet Socialist Republics, the USSR, was a federation of countries and regions captured by the Bolsheviks and turned into a communist state. One of the captured states was Russia.

The evil of the Holodomor was perpetuated by Stalin, secretary general of the communist party and dictator of the USSR. He was not Russian but came from Georgia, another region that was conquered by the USSR.

One could blame the Holodomor on Georgia since that is where the dictator came from but it’s definitely an error to blame it on Russia, a state just as captive as Georgia which had absolutely no say in the matter at the time.
# holodomor — Remedylink 2022-03-03 11:55
Thank you for the edification. The question is do the Ukrainians feel the same way?
+8 # Stalin — CJ 2022-03-03 11:05
Stalin d>d that. Along with his henchman Berea.
They were GEORGIANS who held the war weary Russians and everyone else in terror.
Blame Georgia for that.
And remember Stalin murdered millions of Soviet Russian s. Including the Kulaks. We lost an entire branch of our family to Stalin. Another to Hitler.
Spare me your bullshit.
+22 # The "Conservatives" are on board with this war. — Erfman 2022-03-03 10:24
It makes my head hurt listening to so called "conservatives" promoting this conflict with Russia.

They are echoing the propaganda that the main stream media is putting out... The same main street media that has been lying to us about covid and election fraud for the last 2 years... and Trump for the 4 years before that.

Has the MSM suddenly become credible now that they are blaming Russia for everything under the Sun?

I'm afraid the "conservatives" are "in for a penny, in for a pound". They won't be able to admit they were suckered into supporting this unjust nonsense.

Will Russia Demand Payment For Nat Gas & Oil In Gold?

https://kingworldnews.com/gold-short-squeeze-will-russia-demand-payment-for-nat-gas-oil-in-gold/
+3 # Probably — SBGlett77 2022-03-03 11:07
.
Yes, I think they very well might demand payment in PMs or some commodity. They have a strong negotiating position, as Europe can't function, Winter or Summer, without their energy, and we have left them little choice anyway.

That will of course make the Western media and bankers and politicians apoplectic; ape-crazy. We would probably then quickly cook up a reason to nuke them. Such is the darkness and lack of consistency and truth in the reasoning of the lost. For example, Sean Hannity is calling on Putin to be assassinated, says he has forfeited his right to live. That goes against strong international agreements, but that doesn't matter in an hysteria.
+3 # Per Last Night's Show: — Dudimus Maximus 2022-03-03 10:20
about unsubstantiated tip/rumor/etc; any more on this? this is an RT comment; i dont go on Twitter;
the comment just now was:
Bo Jo
Twitter is saying Putin will announce Marshal law soon.
20 m
Reply
−3
+
−
Comment has been deleted

Sorry, best I could do.

https://www.youtube.com/watch?v=fpGLbpLFVQo&t=25s
# Wow — SBGlett77 2022-03-03 17:35
I get the dark humor, but it seems a little too close in real life now to really chuckle much about it.
Refresh comments list
RSS feed for comments to this post
JComments
by sur.ly
100% Trusted Informational Platform Website 2021