Ukraine President Makes NUCLEAR THREAT Against Russian Crimea: ". . . Will be like Chernobyl; a Dead Area, WORSE than Chernobyl" 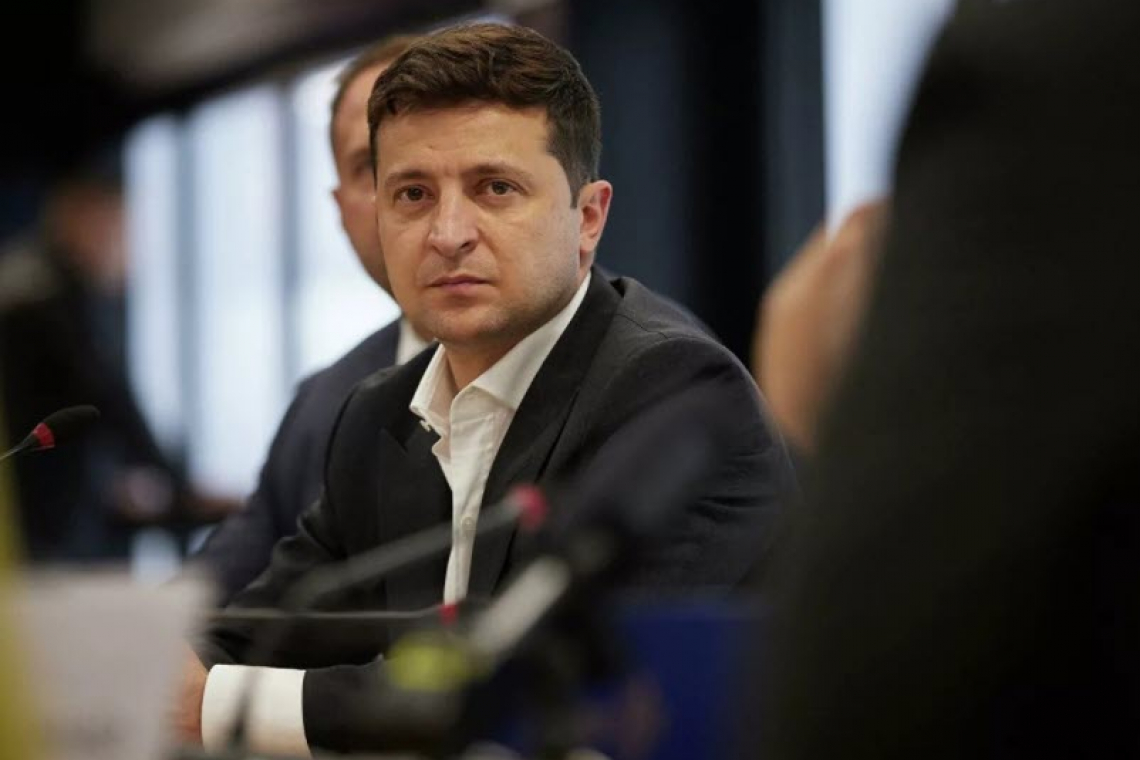 President Volodymyr Zelensky of Ukraine made an explicit nuclear threat against Russian Crimea today, during an interview with LeFigaro Magazine.

Asked by the interviewer what he thought the future would be for the two breakaway oblasts (states) of Luhansk and Donetsk   (collectively referred to as "The Donbas") and of Crimea, Zelensky said Donbass and Crimea would face a future comparable to the exclusion zone in Chernobyl. "It will be a dead territory. It will be worse than Chernobyl"

That, ladies and Gentlemen, is an explicit nuclear threat. As the entire world recalls, Chernobyl was the site of a nuclear reactor meltdown and explosion which spread such heavy radiation in the area, the region had to be permanently evacuated and the reactor sealed in a cement casing.  No one can go into that zone or they will die from the level of radiation there.

Zelensky knows this, and yet today, he said the coming war would leave the Donbas and Crimea "like the exclusion zone in Chernobyl.  It will be a dead territory.  It will be worse than Chernobyl."

Zelensy obviously seems to understand the coming war will "go nuclear" and he just PUBLICLY confirmed that he knows.

Today's remarks precisely match what this web site reported solely to its subscribers yesterday after US Ambassador John Sullivan was summoned to the Russian Foreign Ministry in Moscow.  The information was restricted to subscribers so THEY would have an advantage in getting supplies in preparation for what's coming.   I now release that information to the general public:

When Ambassador John Sullivan arrived at Russia's Ministry of Foreign Affairs on Thursday, April 15, he was told "The United States has six days to cease all NATO activity inside Ukraine.  Otherwise Russia will attack Ukraine and stop the NATO activity itself."

Sullivan was so taken aback, and so shaken, he exited the Foreign Ministry via a side door rather than the main entrance and was whisked away by his limo without making any comments to gathered media outlets.

Shortly after that meeting, the United States imposed additional economic sanctions upon Russia, ejected ten of their Diplomats and called a meeting of the National Security Council.

If one figures that Russia was being reasonable in the 6 days warning, then today, Friday, was the first of those days.  That leaves FIVE DAYS until the outbreak of war.

This time frame also fits with another piece of information: Russian President Vladimir Putin has requested to address a Joint Session of his country's Legislature, (Duma and Elite) which is akin to the US House and Senate.  That address will be given on April 21, precisely FIVE DAYS from right now.

There is a belief that the Russian President will explain to his legislature the existential threat Russia is facing, and ask their permission to use Russia's armed forces to confront that threat.

The existential threat is quite simple: The US fomented, funded, and incited, the overthrow of the Democratically-elected President of Ukraine, Viktor Yanukovich back in 2014.  Afterwards, the US and European Union (EU) bankrolled and installed a puppet government in Kiev, the capital of Ukraine.  That puppet government is doing the bidding of the US and the EU.

Among the items on the list of Things-To-Do for the US and EU, is the establishment of US "anti-missile defenses" on the territory of Ukraine.

If those missiles are put in Ukraine, they will be close enough to Russia's nuclear arsenal that they could be launched and hit the Russian arsenal within FIVE MINUTES.

Worse, those new missiles, with conventional warheads, can be re-fitted with NUCLEAR warheads, in under an hour.   So Russia would face the possibility that US Missiles, perhaps fitted with nuclear warheads, could decapitate the Russian nuclear arsenal before Russia could have time to even respond, thus decapitating the country and allowing an invasion and conquest of Russia.

The Russians can never allow this.  It would be the end of their nation.

The US and NATO are not backing down with Ukraine.   They are sending more troops, weapons, equipment and vehicles.  All this gear is being given to the 110,000 Ukraine army troops that were intentionally massed on the borders of breakaway oblasts (states) Luhansk and Donetsk, beginning about three weeks ago.

As of tonight, the Ukraine Army has 110,000 troops, over 400 tanks, over 900 pieces of artillery, staged within striking distance of both Luhansk and Donetsk, which is populated by mostly Russian-Speaking citizens.  Ukraine began this build-up, yet, in the US and in EU, the mass-media is whining about "Russian Aggression" and complaining that "Russia is a threat to Ukraine."

They never mention - not even once - that Ukraine began all this trouble by massing over a hundred thousand troops, and by the issuance of a Presidential Decree outlining the forcible return of Luhansk, Donetsk AND CRIMEA, to Ukraine!

Crimea held a Referendum in 2014 during which 96% of their voting age population cast Ballots to LEAVE Ukraine and return to Russia. After the vote, the Russian Duma enacted legislation accepting Crimea back into Russia and that was the end of it.  Not anymore!

Ukraine refers to Crimea as "Russian-occupied" territory of Ukraine!  They have publicly stated they intend to take it back from Russia, yet Russia is called the "aggressor;" the "threat!"

Ukraine intends to ATTACK Luhansk and Donetsk to prevent them from leaving Ukraine and joining Russia just like Crimea did.  Ukraine also says, via Presidential Decree, they intend to take back Crimea.

Russia is defending its own territory.

If Ukraine uses that army to also attack civilians in Luhansk and Donetsk, Russia has made clear the Russian Army will protect those civilians.

Throughout this 3 to 4 week build-up, which the mass-media has dismally failed to report, Russia has RESPONDED to the military moves by Ukraine and Russia's response has been disciplined exactness.  The Russians have done everything right; the US and EU are the culprits; the villains, here.

So here we are, 11:00 PM on Friday, April 16, with now only FIVE DAYS remaining in Russia's time limit to Ambassador Sullivan.

We have the President of Ukraine telling a magazine that the Donbas and Crimea will be like "the exclusion zone in Chernobyl.  It will be dead territory.  It will be worse than Chernobyl" and five days from now, it seems the trouble will be settled via a fight.

Americans must be aware that the USA is 70% of NATO.   If NATO gets involved, ALL NATO countries, would then be targeted by Russia.   And if Russian troops in Crimea are hit with nukes, WE WILL ALL BE HIT BACK.

And there, in Europe.

5 Days remain in the Russia statement to US Ambassador Sullivan.

You have that much time to prepare.  You need Emergency food, water, medicines you need to live.  You need a way to generate your own limited electricity (small generator) to keep your refrigerator running and not lose all your food if the grid goes down.  You need FUEL for that generator and for any vehicles that may need gasoline.   You need a Fire Extinguisher, a First-Aid Kit. Guns. Ammunition.

You need COMMS in case the phones and Internet go down: CB radio, HAM radio, GMRS radio to keep in touch with family members and to hear what's going on locally and nationally if Cable, TV and FiOS go down.

You need a PLAN: What will you do if you need to evacuate because you live near a major military base or major city or seaport, which may be a nuclear target?   Where will you evacuate to?  What will you take with you?  Who will you visit to live with until you get back on your own?

If you do nothing, make NO preparations, and decide to "wait and see what happens" then YOU will be shit out of luck when the missiles start flying because the general public will totally panic and there won't be ANY food or supplies left on store shelves.

Just like happens whenever a Hurricane is coming.  The masses (who are asses) never gear-up.  They always wait and see.  Then, when they realize they're about to get slammed, they all go shopping in a panic, wiping out store shelves.

You've seen it.  Happens all the time.

So YOU now have a heads up and a SMALL time frame to take steps to survive.

The rest is up to you.

Better to risk being a little early when securing your families essential food and supplies, rather than a few hours too late and going home empty-handed...

Paper or plastic plates/bowls/cups/utensils and paper towels
Quality manual can opener, 2 if you don't already have one at home
Kitchen matches and disposable lighters
New metal garbage cans and liner bags (water storage & waste storage)
5 or 6 gallon bucket and smaller garbage bags sized for it (toilet)
Pool noodle to cut slit lengthwise to fit as seat for toilet bucket
Toilet paper and, if needed, sanitary napkins, diapers, etc.
Baby wipes (saves water for personal hygiene use)
Flashlights (ideally LED) and more than one portable radio
Plenty more batteries, at least three sets, for each of the above
Bleach (5.25%, without fragrance or soap additives)
Alcohol and Hydrogen Peroxide and hand sanitizers
Prescription drugs filled, and as much extra as possible
First aid kits and Fire extinguishers
At least a couple inexpensive N95 particulate respirator masks for each member
Cheap plastic hooded rain ponchos for everyone
Water filters and all other camping type supplies, such as portable camp toilet,
cook stove and fuel, ammo, etc., if any sporting goods stocks still available.
And, of course, rolls of plastic sheeting, duct tape, staple guns, staples, etc.