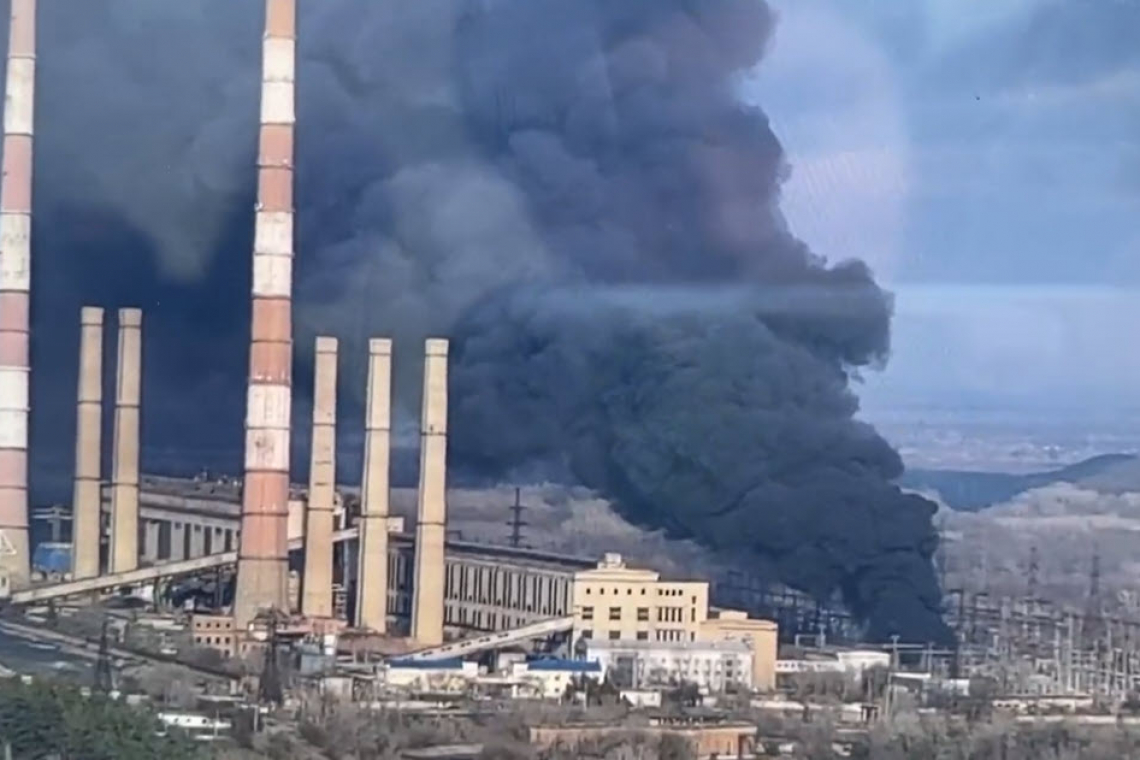 The Ukrainian Army (UA) resumed military attacks against Luhansk and Donetsk early this morning, despite the presence of Russian Peacekeeping troops, and a stern warning from Russia President Putin that hostilities had to stop, or Kiev would bare the full brunt of responsibility.  Around 6:00 AM eastern US time, GRAD Missiles were launched by UA, striking the electric generation plant in Luhansk and starting a fire there.

The use of GRAD Missiles has been confirmed: For the first time since 2018, the Armed Forces of Ukraine used the BM-21 Grad, firing five missiles at Donetsk, the DPR representative office at the Joint Center for Control and Coordination of the Ceasefire said.  It comes after Russia formally and officially Recognized Luhansk and Donetsk as "Independent states" because Ukraine has waged war against those two states since 2014.  The London Financial Times said it best with this front page: 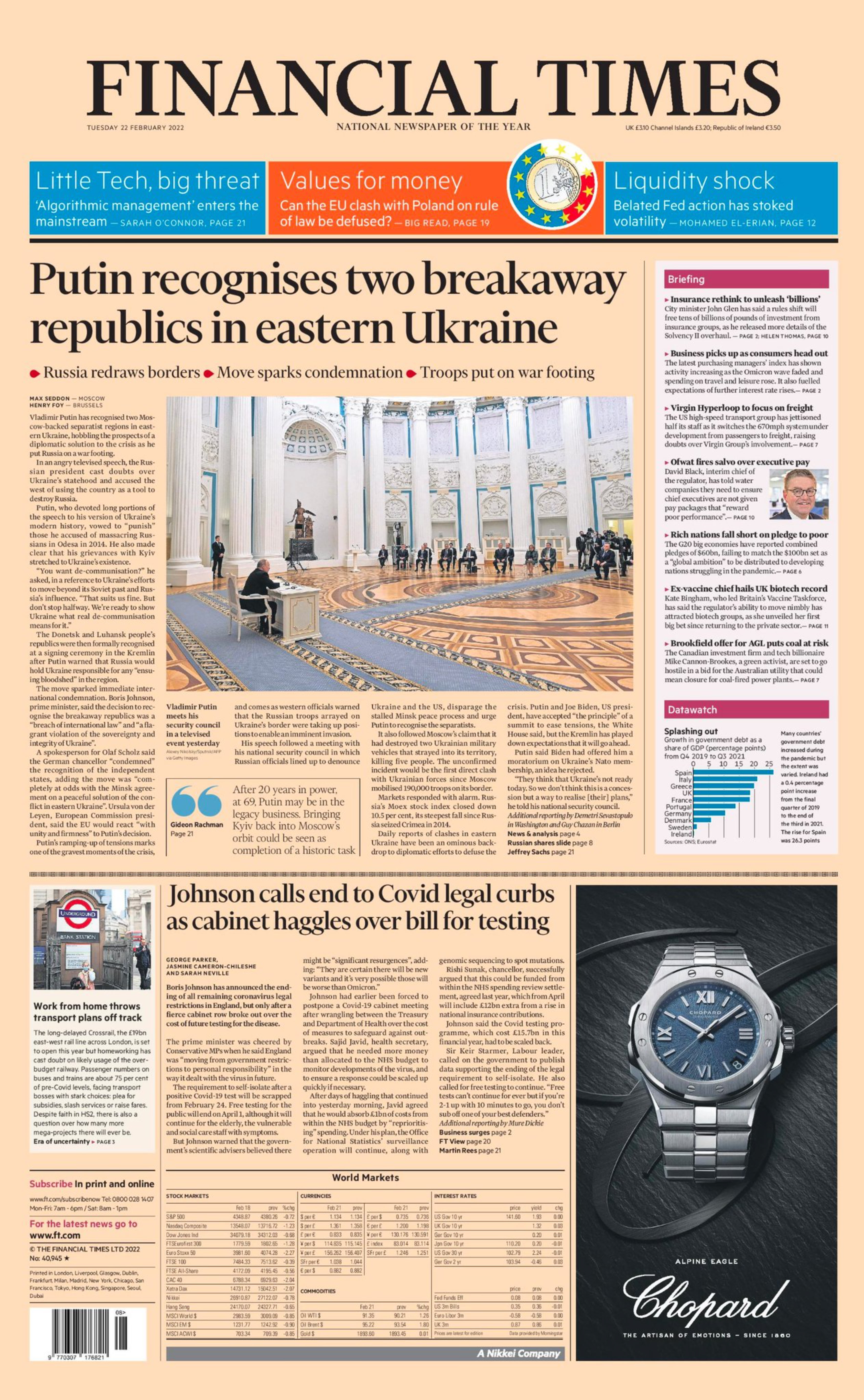 The televised signing of initial documents in the utterly magnificent and beautiful Hall of Catherine the Great at the Kremlin: 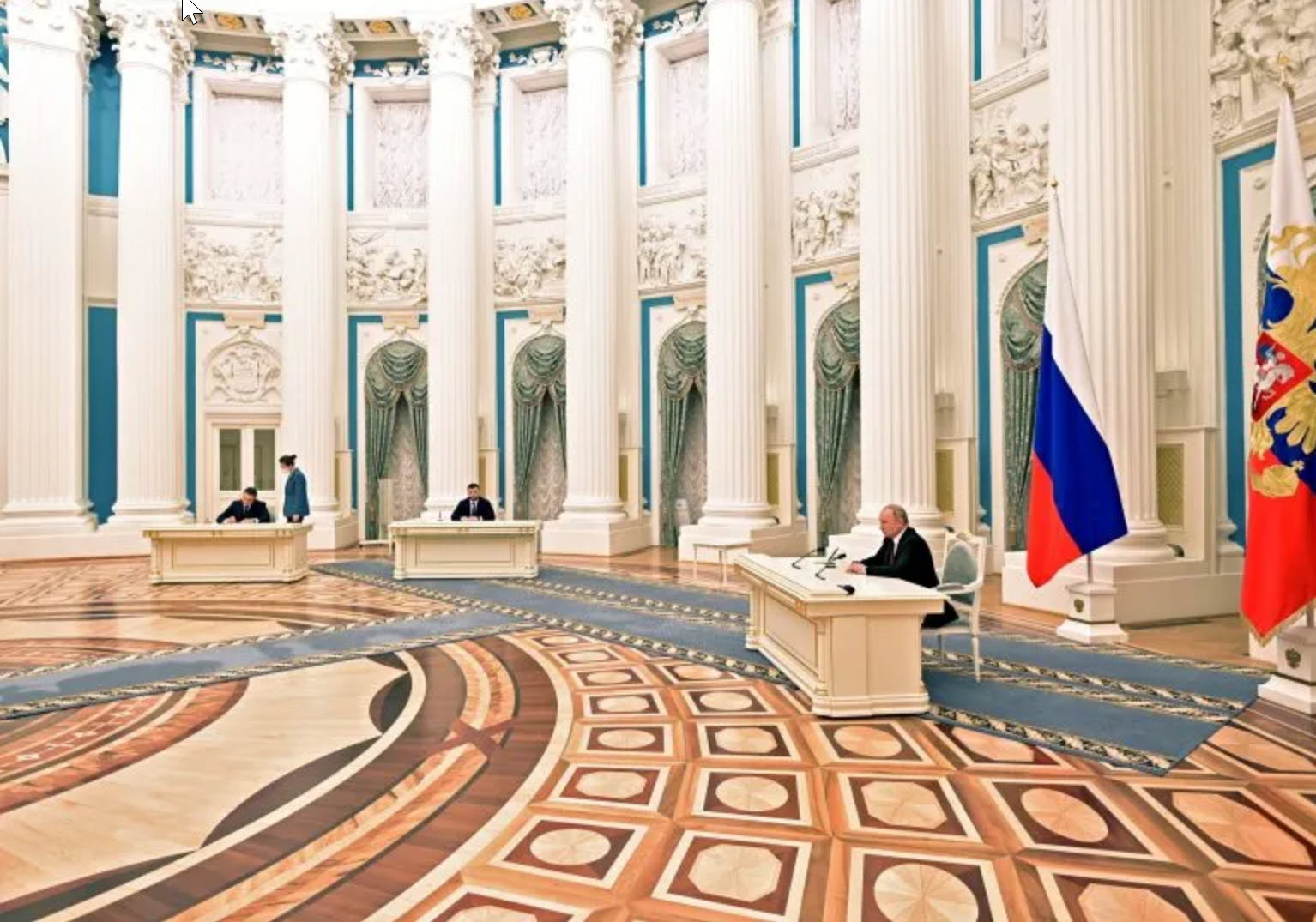 In the photo above, the Leader of Luhansk is seated far left, the leader of Donetsk is seated in the center, and Russian President Putin is seated at far right.

Upon the signing of the Decree recognizing the independence of the two states, the leaders of Luhansk and Donetsk asked President Putin for immediate assistance in protecting the civilians of those two states.   People there have been under attack by Ukraine on and off since 2014, and only very recently have the attacks escalated causing quite a number of civilian deaths, and damage to civilian homes.

Within hours of the signing of a Decree which recognized Luhansk and Donetsk as Independent, President Putin gave permission for Russian Army forces to enter those two states as PEACE KEEPERS.  Troops rolled into the area in regular transport buses.  Tanks, artillery and armored personnel carriers rolled-in as well.

People on the streets of Donetsk and Luhansk CHEERED:

Cars with Flags convoyed down city streets in happy celebration:

President Putin went on Russian television for almost an hour to explain the situation to his nation.   The speech, delivered from his desk in the Kremlin, was a masterpiece of history and facts.

Putin talked about Ukraine's efforts to get away from their former Soviet past and Russia influence which Ukraine calls "de-communization."  Putin then went on to point out that the entire existence of Ukraine was due to Communist Bolsheviks.  He said "You want de-Communization?  That suits us fine.  But don't stop halfway. We are prepared to show you what real de-Communization actually means for it."  He then spoke bluntly about how Ukraine was created, pointing out that Ukraine was created by Lenin.  "It was Lenin who was the architect and engineer of Ukraine.  Given that reality, de-communization would involve giving  Ruthenium back to Romania. Transcarpathia back to Hungary. Logograms/Livov back to Poland and Donbas back to Russia."

(HT Remark: If those regions were to be given back, there would literally be no Ukraine . . . at all.)

Putin went on to talk about the fall of the then Soviet Union, reminding Ukraine that when it fell, its debts were supposed to be repaid by each former Republics on a pro-rata basis, but it was Russia that assumed all the post-Soviet Debt, and Ukraine repaid none of it, saying "In the 1991-2013 period, Ukraine owed hundreds of billions of dollars to Russia. Russia took it upon itself to pay all Soviet debt. Finished in 2017.  But Ukraine never honored its commitment to return certain property."

He then went on to point out that Russia always had good cooperation with Ukraine but that was harmed by the vast corruption in Ukraine, and how the nation itself literally STOLE Russian gas traveling through pipelines.  He then said Ukraine tried to use gas (energy) to Blackmail Russia, and how Ukraine was nothing more than oligarchs enriching themselves and doing nothing for the people of the country.  He also cited the rise of Neo-Nazis in Ukraine, and how they were harming people there, unabated by the law.

Putin then did what the West might find unthinkable: He pointed out that the overthrow of Democratically-elected President Viktor Yanukovich in 2014, was the work of Europe and the U.S..  Calling out the 2014 coup for being west backed, he said the US embassy in Kiev was flowing out $1 million a day to fund the Maiden Revolution!

He went on to say UKRAINE WAS NOT ABLE TO ACHIEVE STABLE STATEHOOD AND HAS THEREFORE HAD TO RELY ON FOREIGN COUNTRIES LIKE THE UNITED STATES. " Then he went further by directly saying "UKRAINE IS MANAGED BY FOREIGN POWERS, THIS AFFECTS ALL LEVELS OF AUTHORITIES"  and wound-up his remarks with this: "Ukraine was never a true nation. Ukraine is a colony with puppets at its helm."  (HT REMARK: By saying this, Putin made clear Ukraine is a completely illegitimate state and so is its government!)

He also went on to say "For the past month, there has been a steady stream of Western weapons to Ukraine." He mentioned NATO training missions too and then said "NATO headquarters can directly command Ukrainian troops."

He continued by saying ""Ukraine joining NATO is a matter of time." "The risk of a sudden strike on Russia will be increased several times." Next comes Putin saying that he will not allow such a thing. "We don't want to believe it, but it's true." NATO's weapons could hit Russia as deep as Volgograd, Kazan, Astrakhan. Radars will penetrate as far as the Urals.

"Long-range missiles would cover all of Russian territory. Reaching Moscow would be within half an hour to five minutes by hypersonic missiles. That is a knife to our throat."

Russia has the right to take actions to protect ourselves and we plan to do that.

As he ended his remarks, Putin told Ukraine that hostilities against Luhansk and Donetsk had to cease immediately "Or Kiev will bear the full brunt of its actions."

Video of the Full speech to his Nation is at the bottom of this story and this version has verbal English translation.

As Russian forces began to arrive, they were met by cheering crowds of citizens in Luhansk and Donetsk, some who were waving Russian flags and celebrating with local fireworks displays!  Cars mounted Russian and LPR/DPR flags and drove around the cities to cheers from locals who felt they would finally be protected from the months and years of Ukrainian attacks.

At about 11:30 PM eastern US time last night, the REAL trouble actually began; Ukraine resumed shelling despite the entry of Russian Peacekeepers. 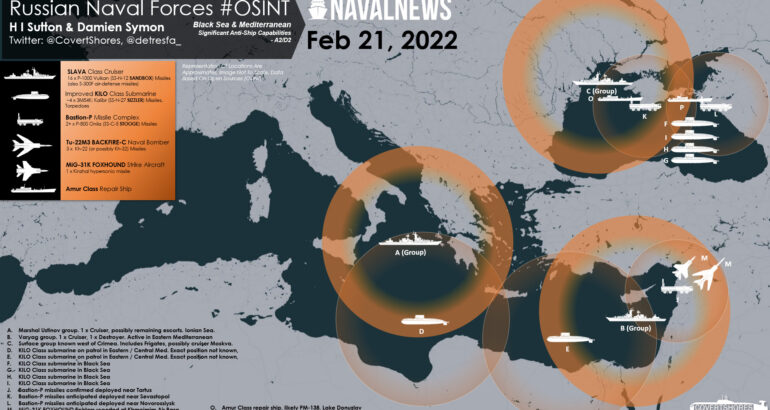 Landing ships, major warships, submarines and aircraft effectively dominate the Black Sea. And the visible preparations extend into the Mediterranean. It appears overwhelming.

At about 5:30 AM eastern US time Tuesday, Russia's lower House of Parliament, the Duma, voted to approve the Friendship Treaty with Donetsk People's Republic in Eastern Ukraine.   The separate approval of the same Treaty with the Luhansk People's Republic was to follow shortly and would be approved.  The vote was 400-0 in favor of the recognition and got a standing ovation in the State Duma.

Putin: Minsk agreements no longer exist. Ukraine must be demilitarized, give up NATO ambitions. Lavrov: Ukraine does not have Sovereignty - Outside Control