Ukraine: We Will Launch Offensive to Destroy Separatists - Russia: Start of new war could destroy All Ukraine . . . 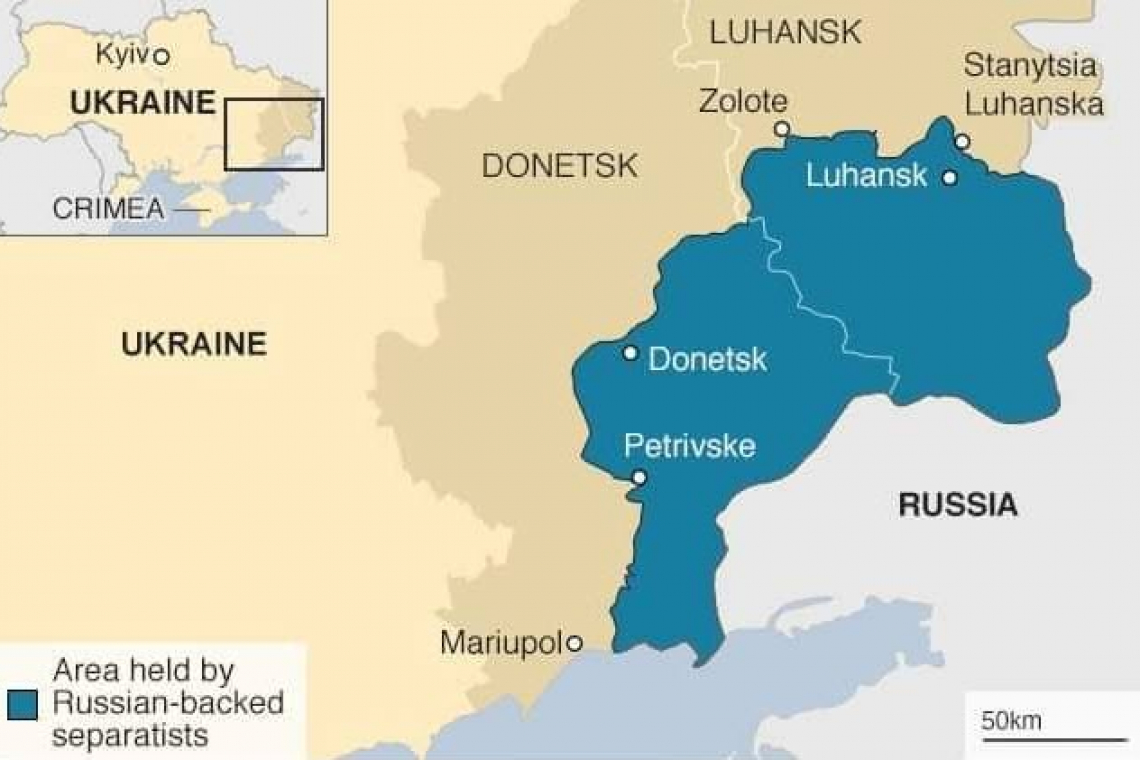 The Chief of Staff of Ukraine announced that the country's armed forces will launch a sweeping attack to destroy the separatist rebels in Donbass.

The comments come amid tensions after Ukraine's commander-in-chief this week accused Moscow of building up forces near their shared border and said that pro-Russian separatists were systematically violating a ceasefire.

The Kremlin said earlier on Thursday that recent Russian troop and military hardware movements near Russia's borders with Ukraine were aimed at ensuring Moscow's own security and were not a threat to anyone.

Of course Russia said that mindful of a Decree issued by the Ukrainian legislature yesterday, which declared that the conflict in eastern Ukraine is "an international war" wherein the "participants are Ukraine and Russia."

When the Ukrainian legislature passed that decree, Russia recoiled in disbelief, saying it amounted to a declaration of war upon Russia!

For the past three weeks, this web site has been chronicling developments in the region, warning all readers this could end up starting a massive war in eastern Europe which could trigger other conflicts worldwide, resulting in an actual World War 3.

These stories laid out how it is the United States and Europe pushing action by Ukraine, which is going to result in a massive and terrible war.  Few listened.  The mass-media in Europe and in the USA remained virtually silent, failing to report what was taking place.

Now we've all arrived at April 1, and the mass media is finally beginning to report that some type of "conflict" may be brewing; after Ukraine, NATO, and Russia have massed literally hundreds-of-thousands of troops, thousands of tanks, armored personnel carriers, self-propelled artillery, and relocated hundreds of fighter jets, bombers, and naval vessels into the same area.

It has been the West which has been pushing Ukraine into war, and now that war is actually coming, it is that same West whining about "Russian aggression." (Hal Turner Remark: Hopefully they will not be baited by the West into disastrous irreparable actions, because; no amount of Germans, Italians, Romanians, Bulgarians, Hungarians, or Spaniards will save them from Russian fury. They will suffer the fates of their great grandfathers.)

The people in Europe and in the USA have been kept blissfully unaware of these developments and when war breaks-out, they will be horrified and frightened.

Readers are urged to obtain emergency food, water, medicines, fuel for vehicles and electric generators, communications equipment like CB radios, HAM radios or GMRS radios, and to keep close watch on developments in this situation.

If Ukraine launches an offensive against what they call Russian-Separatists (people in the states of Luhansk and Donetsk who VOTED to leave Ukraine and become part of Russia) then Russia has made clear it will defend those people from attack.

When that attack commences, Russia is likely to cross the border and fight back on behalf of the breakaway citizens.

At that point, Ukraine would likely be totally outmatched, and would cry to NATO for help.   But Ukraine is NOT a member of NATO.

Whether NATO chooses to come to the aid of Ukraine remains to be seen.

HOWEVER if NATO chooses to get involved, then that would mean direct war with Russia; and every single country in NATO would instantly become a legitimate target for Russia.

Perhaps that's why Russia moved out into battle position, several of its truck-mounted intercontinental ballistic nuclear missiles? That story, with actual VIDEO of live nuclear missiles being moved out of storage, (HERE) changed the dynamic of this situation to that of a potential world war, and potential NUCLEAR exchange.

If Russia is being attacked by NATO, Russia may have to destroy the ocean shipping ports of the USA, likely east coast ports,  to cut-off our war-making supply line.  Naturally, if the US is hit, the US will hit back.

This situation has 'DISASTER" written all over it.   And the entire debacle is being caused because the Biden Administration is resuming the disastrous interference in other people's affairs, that the Obama Administration started!

How many Americans on the US east coast have any idea AT ALL, they may find themselves seeing a blinding, white, flash because the Biden administration started a war in eastern Europe?

NONE of this has to be.   It is being fomented and caused by the US and Europe.

That's where this is going and Americans ought to prepare.