US & Russia meet in Geneva - Barely even LOOKED at Each Other 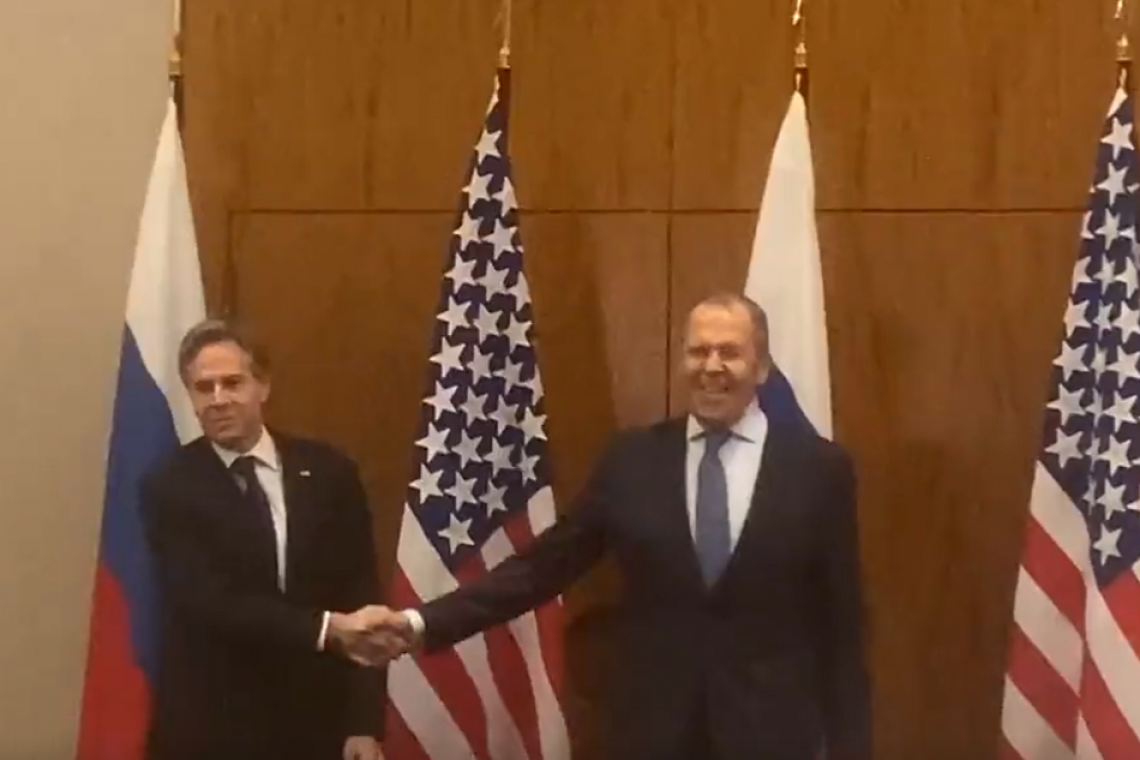 The meeting in Geneva between the US and Russia was scheduled to last two hours; it ended after only 90 minutes.  This shows these are no negotiations for problem solving; only a final attempt to buy time. Last silence to hold your breath before the storm. After that meeting, the US said it is considering evacuating diplomat families from Ukraine "as a precaution" and Germany began moving Tanks out of storage.

The meeting began with a half-hearted handshake with US Secretary of State Blinken not even looking at Russian Foreign Minister Lavrov, as shown above. 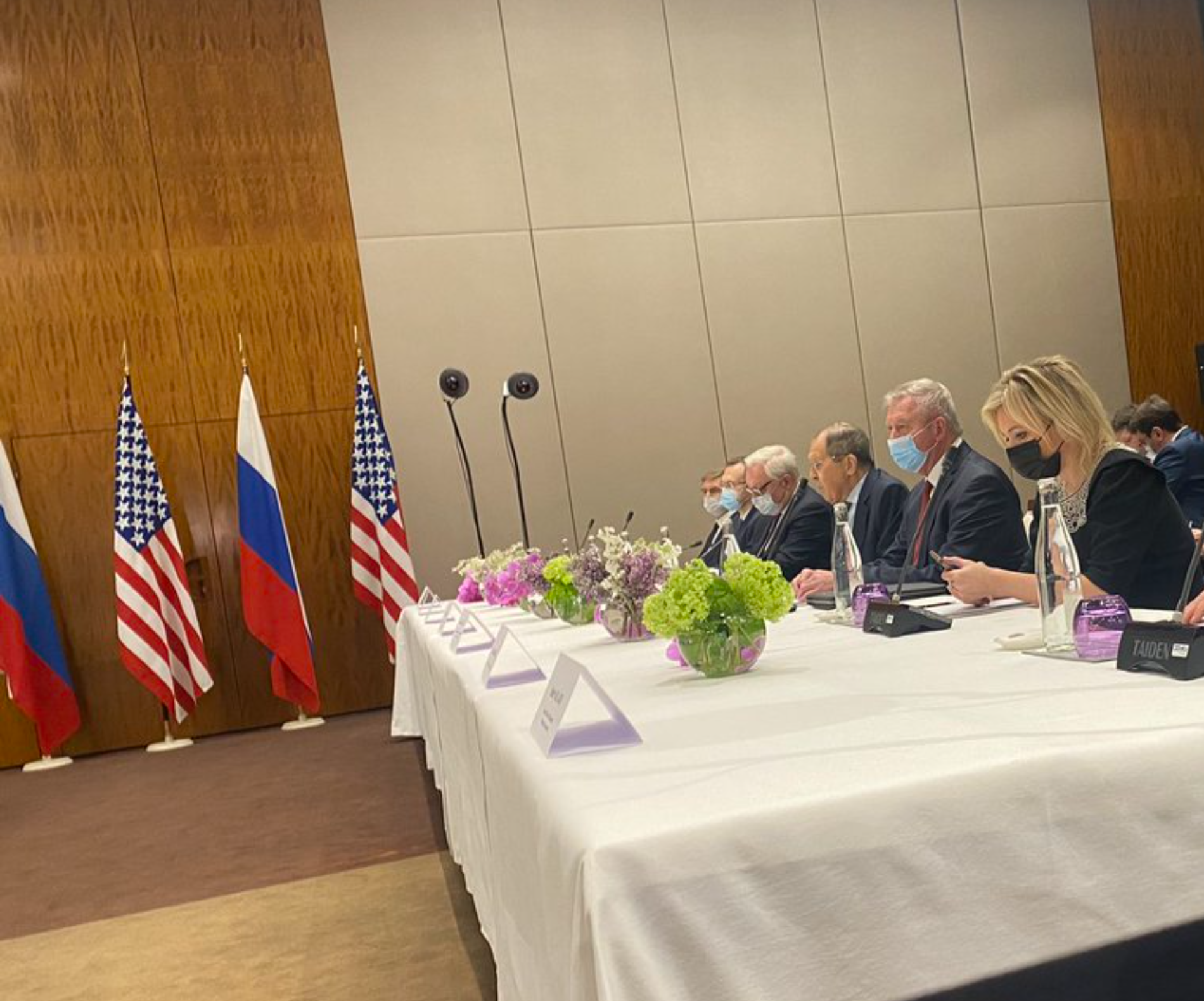 Blinken, says "this is a critical moment" and that he "hopes we can test whether diplomacy remains open."

Kremlin spokesman Dmitry Peskov noted that the Kremlin knew in advance that US Secretary of State Antony Blinken would not bring answers to Russia's proposals on security guarantees for talks in Geneva with Russian Foreign Minister Sergey Lavrov. "We knew in advance that he was not going to hand over [answers on guarantees]. In fact, this meeting is meant for someone else," Peskov said. "We expect both Lavrov and Blinken to have the opportunity to exchange views and compare the understanding of the results of the three rounds of negotiations," he added.

The meeting ended after about 90 minutes.

Blinken did tell Lavrov the US will respond to Russia's proposals by January 30 with . . .  get this . . . . "some ideas."  It seems to ME this is nothing more than an attempt by the US to buy time.  They are shipping unbelievable amounts of weapons into Ukraine and have sortied quite a number of ships as well.  They need time to get all that gear in place.

"Russia is ready to defend its legitimate security interests, but there are no grounds to take its actions as an attempt to form some kind of exclusive zone of influence" the Russian Foreign Ministry said in a statement released today in response to media questions received at the press conference of Foreign Minister Sergey Lavrov.

I see these talks as a mere formality, and a PR event. The truth is war was certain the moment NATO said they intend to continue encroaching on the Russian border.

Ukraine is nothing, this is about the bigger picture. Think the immovable object meeting the unstoppable force.

Russia can’t move, because there’s nowhere to move but deeper into their own territory. NATO has to continue because it’s owners won’t stop.

This is the impasse, and why everything now is about buying time and achieving the element of surprise. Either the US will conduct a major false flag or Russia will preemptively strike.

Putin will be finished if he doesn’t secure Russia.

Maybe a little delay for a week, but Putin didn't move all that hardware and manpower because he thought he might have a chance to intimidate the West with it. He knew from the start what eventually he was gonna have to do. He knows the US never lets anything be dictated to them. The US either wins big or loses big . The only thing anyone or any country especially the US ever understands without a doubt, is force.

Blinken told reporters, on Russia's security concerns, "US ready to take steps on a reciprocal basis."

Right.  Sure.  So ready he didn't even bother to bring written responses to Russia's written treaty proposals.

Lavrov says that "The Russian experience of dealing with the West on security issues is full with cases of broken promises."  He's right.

It seems to me this issue has entered full dis-information mode.  Lies on top of lies.  Almost nothing that is said now, can be trusted.  Want proof?

In a speech from Secretary Blinken, he said the US “will not treat the principles of sovereignty or territorial integrity, enshrined in the UN Charter and affirmed by the UN Security Council, as negotiable.”   Sounds wonderful, right?  Yet the US is currently illegally occupying a large part of Syria. It has no UN mandate to do so, and Damascus has not given it permission to be there. Also, Iraq's parliament has repeatedly asked the US to withdraw its troops, and Washington has refused.

So on its face, what Blinken says is outright false as proved with empirical evidence taking place right now!  The US says one thing, but does another.

While I'm at it, let me go a little farther. Blinken says Lavrov's repeated denial of plans to invade Ukraine. "But it is deeds and actions" that US will judge, he says.

More grand talk from Blinken.  Let's look at what WE in the US have "done": it was the US that pulled out of Open Skies Treaty, not Russia. NATO beached the CFE, not Russia. And the US withdrew from the INF, not Russia.   So whose deeds must be judged as "threatening?"

The Russian Foreign Ministry did confirm "There are no dates or concrete plans for any additional meetings."  That, we can believe!

So the talking is done.   It failed.  You know what comes next.