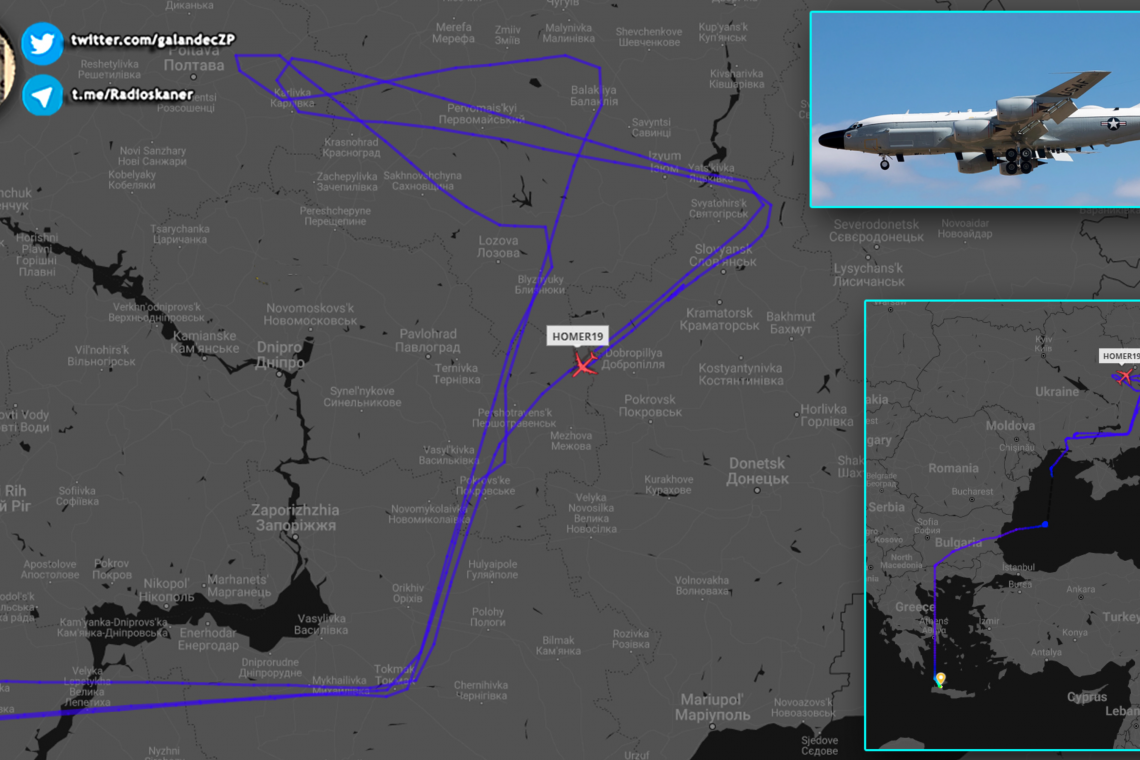 This morning, United States Air Force planes are flying numerous reconnaissance missions over eastern Ukraine, continuing to deliberately poke the Russia Bear, and for no good reason at all.

We begin with this flight of a Boeing RC-135V flying over what is considered to be the front line between the corrupt, Nazi-infested Kiev, Ukraine "government" and the breakaway states (oblasts) of Luhansk and Donetsk, collectively called "The Donbass." 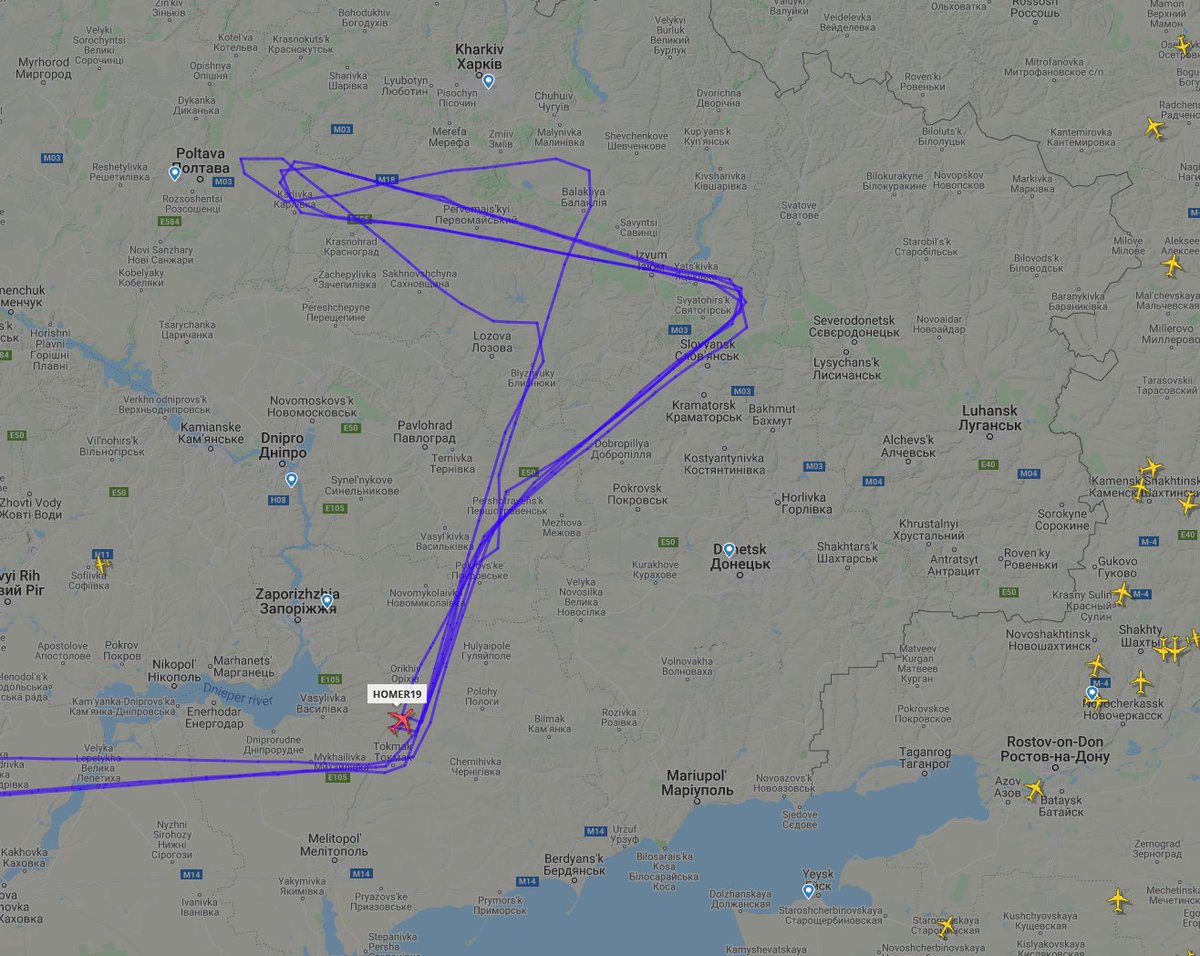 The Boeing RC-135 is a family of large reconnaissance aircraft built by Boeing and modified by a number of companies, including General Dynamics, Lockheed, LTV, E-Systems, and L3 Technologies.   It is used to support theater and national level intelligence consumers with near real-time on-scene collection, analysis and dissemination capabilities.   Known as "Rivet-Joint" here is what the aircraft looks like:

Next, shown entering western Ukraine near Lviv, is a Boeing E-8C. 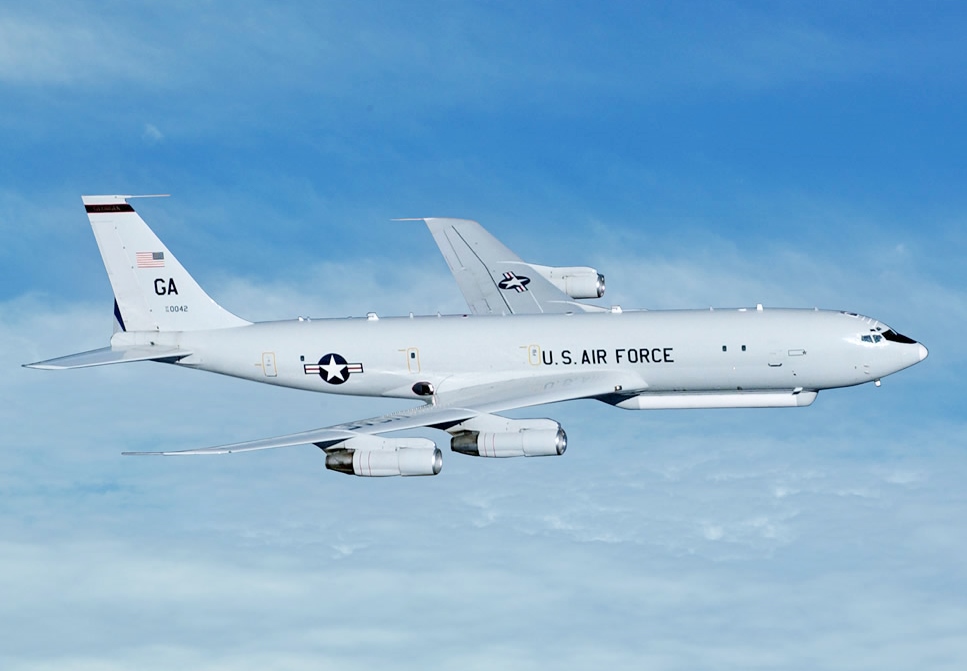 To pick up moving targets, the Doppler radar looks at the Doppler frequency shift of the returned signal. It can look from a long range, which the military refers to as a high standoff capability. The antenna can be tilted to either side of the aircraft for a 120-degree field of view covering nearly 50,000 km2 (19,305 mile²) and can simultaneously track 600 targets at more than 250 km (152 miles).[1] The GMTI modes cannot pick up objects that are too small, insufficiently dense, or stationary. Data processing allows the APY-7 to differentiate between armored vehicles (tracked tanks) and trucks, allowing targeting personnel to better select the appropriate ordnance for various targets.

The system's SAR modes can produce images of stationary objects. Objects with many angles (for example, the interior of a pick-up bed) will give a much better radar signature, or specular return. In addition to being able to detect, locate and track large numbers of ground vehicles, the radar has a limited capability to detect helicopters, rotating antennas and low, slow-moving fixed-wing aircraft.

The radar and computer subsystems on the E-8C can gather and display broad and detailed battlefield information. Data is collected as events occur. This includes position and tracking information on enemy and friendly ground forces. The information is relayed in near-real time to the US Army's common ground stations via the secure jam-resistant surveillance and control data link (SCDL) and to other ground C4I nodes beyond line-of-sight via ultra high frequency satellite communications.

Northrop Grumman has tested the installation of a MS-177 camera on an E-8C to provide real time visual target confirmation.

This is a plane the U.S. sends in when it is looking to do actual battle, and wants precise target information.

Earlier this month, Moscow submitted draft security documents demanding that NATO deny membership to Ukraine and other former Soviet countries and roll back its military deployments in Central and Eastern Europe.

The Kremlin presented its security demand amid tensions over a Russian troop buildup near Ukraine in recent weeks that has fueled Western fears of a possible invasion. U.S. President Joe Biden warned Putin in a video call earlier this month that Russia will face “severe consequences” if it attacks Ukraine.

Russia has denied an intention of launching an invasion and, in its turn, accused Ukraine of hatching plans to try to reclaim control of the territories held by Moscow-backed rebels by force. Ukraine has rejected the claim.

Putin has urged the West to move quickly to meet his demands, warning that Moscow will have to take “adequate military-technical measures” if the West continues its “aggressive” course “on the threshold of our home.”

Russia has repeatedly said that the entire reason for NATO trying to bring Ukraine into its organization, is for the U.S. to place anti-missile defenses on the territory of Ukraine.   These American missiles would have a flight time of five minutes to Moscow, or seven to eight minutes to Russia's strategic nuclear missile silos.

The real problem is that the warheads on these "defensive" missiles, can be replaced within an hour, and made into offensive NUCLEAR missiles.   The flight time for a NATO first strike, would then be so small, that Russia would not be able to defend itself against a first-strike.

This reality is untenable to Russia because it threatens their very existence.

For over a year, Russia has publicly and candidly told the world this is what the US and NATO is planning, and in that same year, Russia has repeatedly said such a situation would be an existential threat to them, one which they would have to confront.   NATO and the US proceeded anyway.

Now, the world is in an almost reverse "Cuban missile crisis."   Back on the early 1960's the then-Soviert Union placed medium range and intermediate range nuclear missiles in Cuba.   They were detected by US spy plane flights.

When told of these missiles, then U.S. President John F. Kennedy asked his Generals how long it would take for those Cuba based missiles to hit Washington, DC?   They replied "5 minutes."   They went on to tell President Kennedy that the Intermediate Range missiles could also wipe out many other US cities, causing the U.S. to lose 80% of its population to a nuclear first strike.

Kennedy took action.   He imposed a Quarantine against all vessels trying to enter Cuba; each being searched for missiles or missile parts, and if found, turned back.

A flurry of behind the scenes Diplomatic efforts over thirteen days, brought the world to the literal brink of actual nuclear war.  The US made clear Diplomatically that the missiles in Cuba had to go and if they didn't, the US would invade and destroy them.

It came down to a period of eight hours where the then-Soviet Union had a choice: Use those missiles, or lose them.

Thank God there were men of good will in the Soviet Union, and they chose to withdraw the missiles.  Thus, no invasion of US attack was needed or launched.

But an interesting side event became clear once all the details of this crisis became publicly known:  At the time, the US had placed Jupiter Missiles in Turkey.  Those missiles posed a unique threat to the Soviet Union and so the Soviets placed nukes in Cuba to duplicate the threat.

It was agreed Diplomatically between the US and Soviets that, as a condition of the Soviets removing the missiles from Cuba, the US would remove the Jupiter missiles from Turkey within 6 months.

Here we are, almost 60 years later, the US/NATO is trying to do to Russia, what we almost went to war over when the Soviet Union did it to us!  It is the US/NATO trying to put missiles so close to Russia, that Russia must act.

Yet the US/NATO complain that Russia is being aggressive.  Those claims are false.

This time, the US/NATO are the bad guys.  And we've pushed the Russians to the point where they must take action or face their own destruction.

We caused this trouble.  And for no good reason at all.

Just this weekend, Russian President Putin said, after the fall of the Soviet Union, that our relations were "cloudless."  There were no clouds on the horizon.  Yet in the years since, those relations have been deliberately soured and made bad by continued encroachment by NATO/US around Russian territory, and now, right up to what Putin calls their "front porch."

It is the US/NATO that has been moving bases, war equipment, and missiles, closer and closer to Russia.  As Putin said last week, the Russians, have "nowhere to retreat to" anymore.  We've literally come right up to their borders.   With that simple fact, it is clear to see who is to blame for the current troubles. We are to blame.