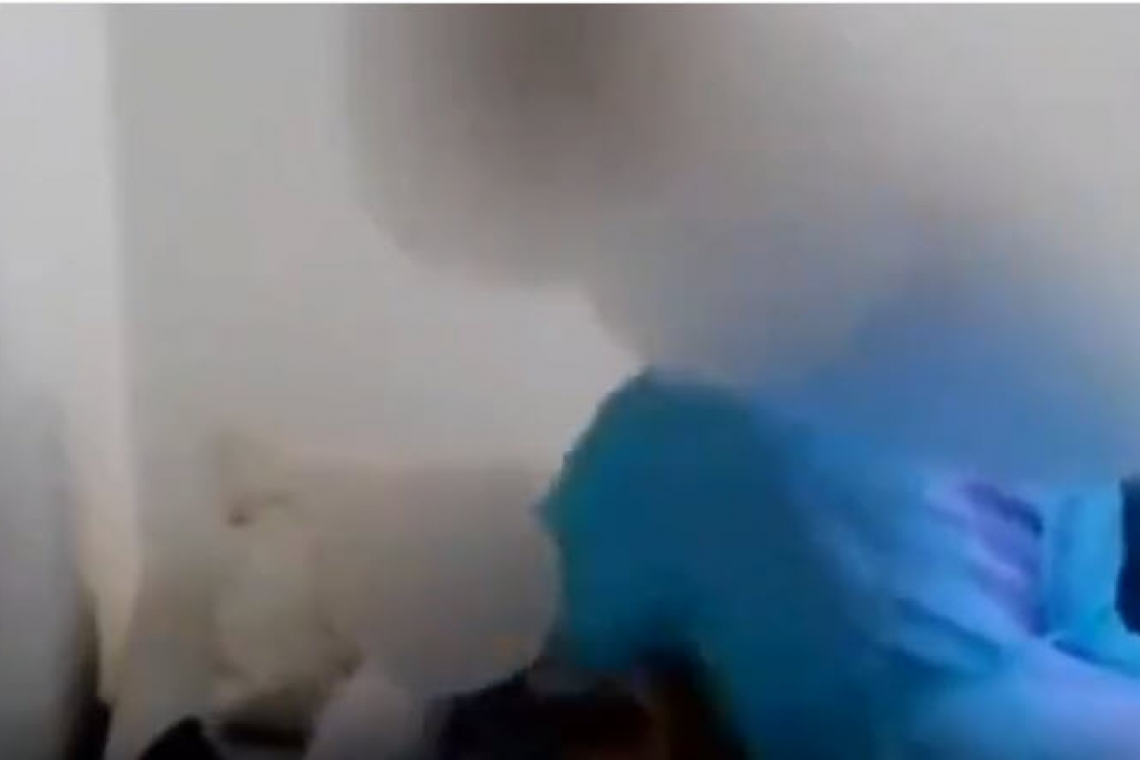 Last night on the Hal Turner Radio Show, I told my audience that I had video of FORCED COVID-19 Vaccinations being administered to old people in nursing homes in Germany.   Here is that video . . .

The Whistleblower who provided this video personally took the video and personally witnessed each act of forced vaccination.

I think it proper to tell you that I am the type of person who would be inclined to hunt down, ambush, and kill any people who did such a thing to me or to any member of my family.  I can envision myself being so irate, I might just say Fuck the law.  Fuck the courts.  Fuck the public health.

The tyranny of the majority is going too far. Individual freedom is paramount to what the masses (who are asses) want.

It doesn't matter one wit to me if the persons involved are Doctors, Nurses, Cops, Judges, or soldiers.  If you come at me with a syringe containing something I don't want, and you forcibly administer it - court order or not - You'd better get right with God because I am exactly the wrong type of person to do such a thing to.   I would be inclined to retaliate by force.

You see, this COVID-19 "vaccine" is not a vaccine at all.  It is the "Mark of the Beast" -- genetic modification that is irreversible. It changes our DNA.    The Bible talks about it.  That all men, rich and poor, would have to have the mark in order to buy or sell or, in our case, even travel.  And what is taking place already?   You can't go into a store to buy without wearing a friggin mask.  You can't travel on airlines, cruise ships, or even from Niagara Falls, NY to the next town over, Niagara Falls, Ontario,  CANADA, without proof of the vaccine. A pregnant Waitress here in the New York area declined the vaccine for fear it might harm her baby -- and she was FIRED for refusing the vaccine.

Just like the Bible warned.  How long will it be before the masses (who are asses) demand proof of vaccination before being allowed to buy, sell, work, or travel?????  It's no great leap from where we are right now!

Look at all the morons you see in videos from super markets, having freak-outs because a person is shopping without a mask.  Look at all the video of cops - without masks by the way - arresting people for not wearing a mask at events like a football game.  These morons are everywhere.

They're morons because the CDC itself says masks will not protect from the virus.  The virus particles are small enough to fit through the pores in a mask.  THAT is the science.  The mask BOX even says so: 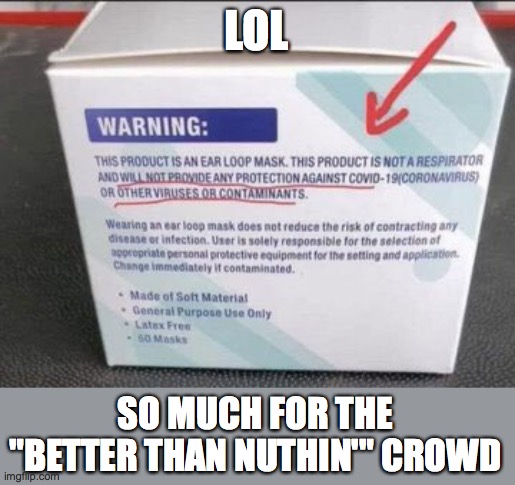 Yet these dingbats are all over the place screeching like witches if anyone dares to go out shopping without a mask that doesn't work.  How about the biggest morons of all - people who wear masks while driving their car while ALONE in the car!   What level of idiocy is that? The grandeur of general public stupidity is on display every day.  Stupid is as stupid does.

The Bible also tells us what would happen to everyone who takes the Mark of the Beast . . . they're dead to God.  Into the lake of fire, forever. What did God say? "My people die for lack of knowledge."

I think this genetic therapy DNA modification which they are falsely advertising as a "vaccine" qualifies as the "Mark of the Beast."  And if I am given that mark against my will, then I believe I would be dead to my living, almighty, God.

So at that point, since it is the Ten Commandments which have been the ONLY thing preventing me from killing, they wouldn't apply anymore . . . and off to the races I would be inclined to go!

For what it's worth, being forcibly injected with experimental gene therapy is a crime against humanity according to the Nuremberg Tribunals after World War 2. The Nuremberg Tribunal held that medical experiments could not be done on people without their informed consent.  That's exactly what this mRNA "vaccine" is . . . a giant experiment.  It's never been done before.

Did you know that when they tried testing these mRNA "vaccines" on animals, ALL the animals died?    Instead of stopping the development of a vaccine for use on humans, they simply WAIVED the animal testing requirements and moved right into using this crap on people.

People who engage in crimes against humanity are subject to the death penalty and that penalty should be meted-out ON THE SPOT.

These liberal medical people, and a slew of government public servants, seem to think that "the public" owns everyone and can do with our body as they  please in the name of public health.

They argue that the public has a right to be safe . . . and somehow them agreeing to take a vaccine, somehow converts to me being forced to take it so THEY can be safe????  No thanks.

But the morons in the general public cannot think that far because MOST people in the general public, are outright stupid.  They're like retarded children throwing temper tantrums when OTHERS won't give them what they want.  And what is it they want? They want YOU to wear a filthy face diaper loaded with bacteria, that causes skin acne, rots your teeth and gums, and promotes fungal infections in the lungs.  That's what the masses who are asses are achieving.  What they're not achieving is protection from any virus.

This is the ultimate tyranny; being forcibly injected with something you don't want in the name of public safety.

Push is now coming to shove.