The Missile cruiser ‘Moskva’ was evacuated after fire caused an ammunition explosion, "severely damaging" the ship according to a statement by the Russian Defense Ministry.  Ukraine is claiming they fired two "Neptune" anti-ship Missiles at the ship causing it to explode, but this is not confirmed.

The entire crew was evacuated after an ammunition explosion caused by a fire, the Russian Defense Ministry said in a statement cited by Russian media on Wednesday night. The cruiser suffered “serious damage,” the Russian military said, adding that the cause of the fire was under investigation.

The Slava-class missile cruiser, launched in 1979, is armed with 16 anti-ship missiles and many more air defense missiles, torpedoes and guns. It is part of the Black Sea fleet, and has been engaged in operations off the coast of Ukraine since February.

Ukrainian officials on Wednesday evening claimed that a battery of their Neptune anti-ship missiles hidden in Odessa had successfully struck the Moskva twice, setting the cruiser ablaze. Among those making the claim were Maksim Marchenko, head of the military administration in Odessa, and Anton Gerashchenko, adviser to the Interior Ministry in Kiev.

They did not provide any evidence for their claims.

It was just yesterday that the Hal Turner Radio Show reported to the world via Global High Frequency radio broadcasts on WBCQ and WRMI,  that NATO personnel were in Odessa with equipment that could provide precise coordinates on every ship in the Black Sea within 200km, and that the NATO targeting gear could be used to guide missiles to those ships.   One day later, Russia's Black Sea flagship has now, apparently, been hit.

According to local reports - which HAVE NOT been verified - the Moskva was in the process of changing position to go after a drone which had achieved "radar lock" upon it.  That change of position seems to have placed the Moskva in the worst position imaginable as far as becoming vulnerable to a coastal launched missile strike.

Was the drone "radar lock" a NATO Drone?   Was the Radar lock a way to get the ship to change position to make it ripe for missile attack?

The answers to these questions may determine whether Ukraine - or the U.S.A. - gets retaliated against by Russia.  It may be that such retaliation would come with no warning . . . just like the Moskva had no warning.    We are in dangerous times.

VIDEO from Odessa Ukraine shows a large ship ablaze off the coast.  It is reportedly video of the Moskva:

The Russian government is now saying the explosions on the Moskva stopped, the fires were put out, and the ship is being towed to port.   This flies in the face of NUMEROUS other reports claiming the ship rolled onto its side and sank.

We all know the aphorism "The first casualty of war is truth" and it certainly would be a major black-eye to the Russians if their Black Sea Flagship was sunk.  But if it __was__ sunk, the Russians should stand up and say so.  There's no shame in losing a ship during war-type hostilities.  In fact, losing the ship would be a rallying cry to take-off the gloves as far as Ukraine.

The reason I think the ship actually sank is the fact there was such a heavy body of fire aboard.

Remember the US Navy ship that caught fire while at dock in San Diego back in July 2020?   The USS Bonhomme Richard was the name of the ship.   It caught fire during renovations and burned for almost a full week at portside!  Here was an image taken from helicopter video the first day of the fire: 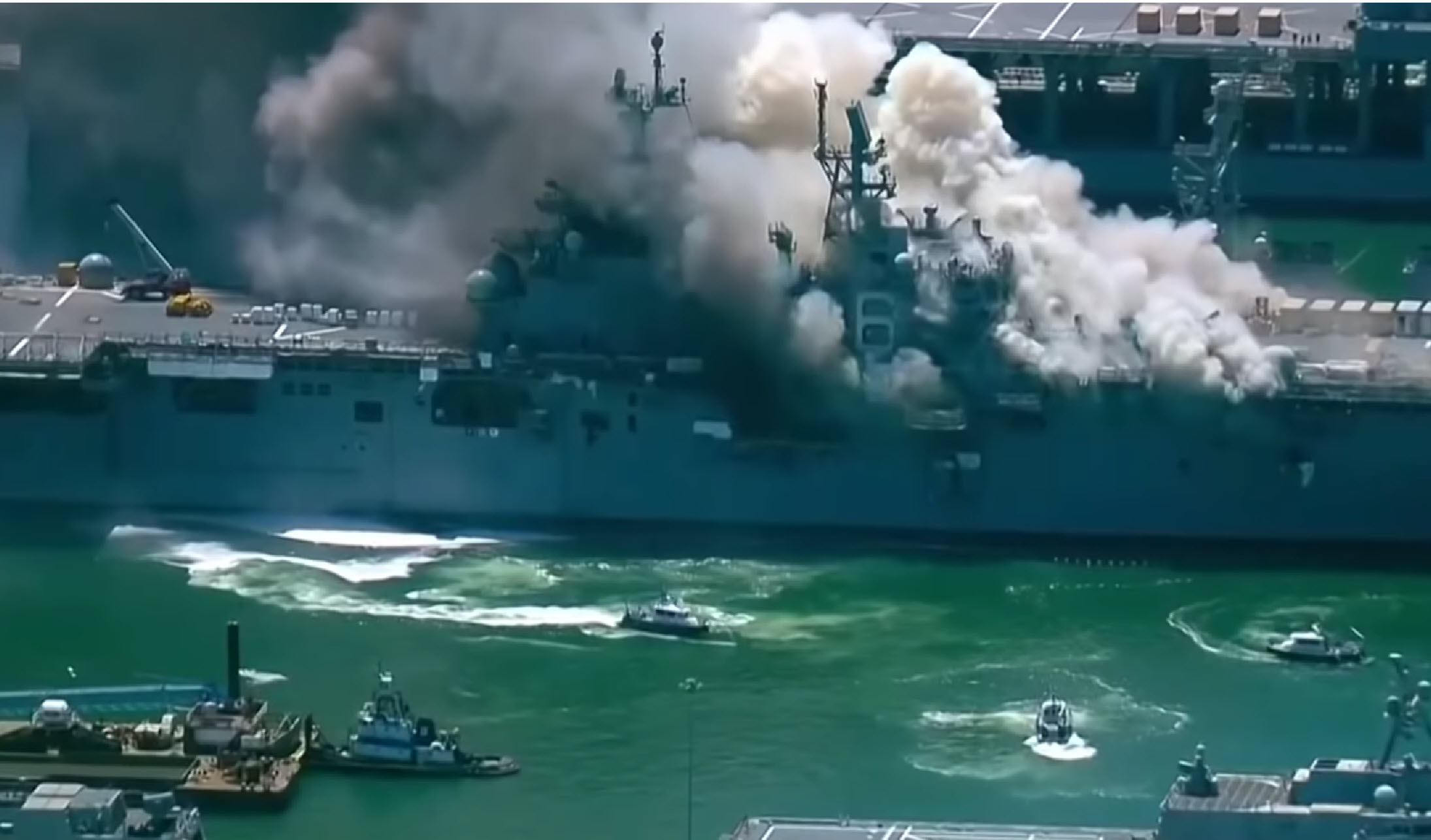 The vessel shown immediately above burned for a week.  In port.  The ideal place to apply fire-fighting resources.  And STILL we lost the ship.  It had to be scrapped.

So here we are, about twelve hours after the massive fires aboard the Moskva, and we're supposed to believe that not only did all that fire get put out, the ship was towed away?

Nope.  I cannot say that I believe that.  Just too much damage and too much fire.

There's also a whole SLEW of sources saying the ship rolled onto its side and sank.

Turkish commercial ships in the area responded to render aid and they report saving 54 sailors from the stricken ship.   And it is from these commercial sources that we are hearing the ship rolled onto its side and sank.

So unless some miracle of Russian firefighting took place, I personally think the ship is gone.   I HOPE I'm wrong, but that's what I think.

TURNS OUT, I AM WRONG!

UPDATE: Pentagon spokesman John Kirby just said on CNN that the warship Moskva is still afloat but clearly damaged. He said it remains unclear whether the damage was caused by Ukraine missile attack. Russia claims that a fire onboard caused ammunition to explode.

Russia’s flagship cruiser Moskva has sunk in “stormy seas” while being towed to a port in the Black Sea, the Russian defense ministry announced.

The Ukrainian southern military command claimed late on Wednesday to have struck the Moskva with Neptune anti-ship missiles, causing it to start sinking and forcing the crew to abandon ship.

Russia’s defense ministry initially denied reports that it had sunk and claimed the fires had been extinguished. Four Russian ships that had gone to the Moskva’s rescue were being hampered by stormy weather and by ammunition blowing up onboard, it said.

But late on Thursday, the ministry said in a statement: “The cruiser ship Moskva lost its stability when it was towed to the port because of the damage to the ship’s hull that it received during the fire from the detonation of ammunition. In stormy sea conditions, the ship sank”.

The crew were evacuated to other ships, the ministry said.